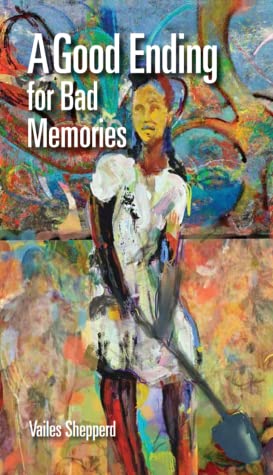 “Selma Macomb was beautiful and crazy, though she didn’t spend time in the mirror, talk to herself, have fits, or see things that weren’t there. She had never had a breakdown. She suffered regular ‘break aparts.’ Bits of her scattered everywhere like a Humpty Dumpty who could not put herself back together again.”

These lines from Vailes Shepperd’s unconventional debut novel, A Good Ending for Bad Memories, introduce us to the first of four colorful personas that inhabit protagonist Mrs. Thrace. It is 1958. Mrs. Thrace and her family, who are Black, are living in Cairo, where her husband works as an attaché to the U.S. ambassador to Egypt. With unnerving insouciance, she floats through her days disinterested in her children’s activities.

She hardly changes her habits when the family returns to Washington, DC, although they live part time in Mexico. A benevolent yet distant father, Mr. Thrace prides himself on his wife’s elegance. Her conflicting behaviors do not bother him so long as she makes charming conversation with dignitaries over dinner.

Their three children — Mirella, Alley, and a son who remains nameless for a third of the novel — puzzle over their mother’s abrupt behavior shifts. Given their erratic parenting, the kids cope admirably over the next decade, managing their own education with unorthodox efficiency. The son eventually sneaks away to his grandparents’ mountaintop home, a wild place tinged in magical realism, where he discovers his true name.

Meanwhile, Mrs. Thrace’s splintered recollections weave through her daily life, often making her feel scattered — literally. Her head sits atop a bookshelf and her feet rest in their shoes while her hand holds Mr. Thrace’s. Such oddities, accompanied by mysterious deaths and a text entitled The Curiously Successful Negro, enrich this domestic drama, whose conclusion is startling and satisfying.

The book’s focus is the dissociative identity disorder (once known as multiple personality disorder) that plagues Mrs. Thrace and its repercussions on her family. Her personas always present themselves in the same order: seductive Selma burdens her children with stories of the past; Agnes hugs them for hours in silence; Berdeena bellows nonsensical songs while cooking; and Martha specializes in murder investigation.

It recalls the theme of insanity in African American literature, most notably that of Toni Morrison. The mind’s disconnect from certain memories is believed to be a coping mechanism, a path toward equilibrium despite disturbing conditions. Shepperd uses the disorder to explain the difficult reality of Black women who have experienced or witnessed the same kinds of horrors as Mrs. Thrace.

The plot develops slowly and is filled with anecdotes about her idiosyncrasies, such as when Agnes hides all the chairs from her husband. Each persona is ignorant of the others, leading to contradictions and awkward interruptions that confuse the children. Thus, the younger generation cannot escape the consequences of the older generation’s trauma. The children emerge as the story’s heroes as they observe and adapt to their inconsistent environment, eventually tolerating their parents as guests and suffering their neglect with dignity.

The lack of narrative urgency lends the novel a literary feel, although the reader may become impatient wondering if Shepperd intends to reveal the origins of Mrs. Thrace’s condition. But perseverant readers discover clever leitmotifs and plot threads that pay off grandly by the end.

The symbolism of burial repeats regularly, beginning with the family’s conversation about the Egyptian pyramids, and especially during Mrs. Thrace’s childhood flashbacks. Along the way, exquisite prose reads like poetry: “She walked all over Cairo with [her brother’s ghost] tethered to her wrist, soaring up behind, tarnishing the sky with his yellowed edges.” Occasional typos and unusual punctuation distract in places.

Mr. Thrace’s position as a government official is an inspiring example of Black achievement before the Civil Rights Movement. In fact, his success offers one of the most delicious aspects of the book: its illustration of the hypothesis that, during slavery, certain ingenious Black men secretly prospered and passed their wealth onto their descendants. Shepperd’s account may be inspired in part by true success stories, such as that of banker Robert Reed Church or O.W. Gurley, founder of Tulsa’s “Black Wall Street.”

Both Mr. and Mrs. Thrace come from financially savvy dynasties bound by history, offering elements of positivity within an otherwise brutal past. However, even wealth is not enough to situate a Black man comfortably in the United States:

The family’s race seems to have little bearing on its prosperity at the start of the book, but Mrs. Thrace’s childhood in rural poverty thrusts itself into her present. The price paid to achieve the American Dream forms a subtle thread throughout.

In A Good Ending for Bad Memories, Vailes Shepperd mingles themes of insanity and affluence with those of memory and death to create a singular novel. Lovers of lyrical, character-driven fiction with strong symbolism will cherish its sumptuous writing style.

A decade-long resident of Florida, Gisèle Lewis writes about city life, living abroad, and volunteering with the local refugee community. Her work has been published or is forthcoming in the Baltimore Review, Saw Palm, Pirene’s Fountain, Tiny Seed Journal, and elsewhere. Her interviews with women readers appear at GiseleLewis.com.