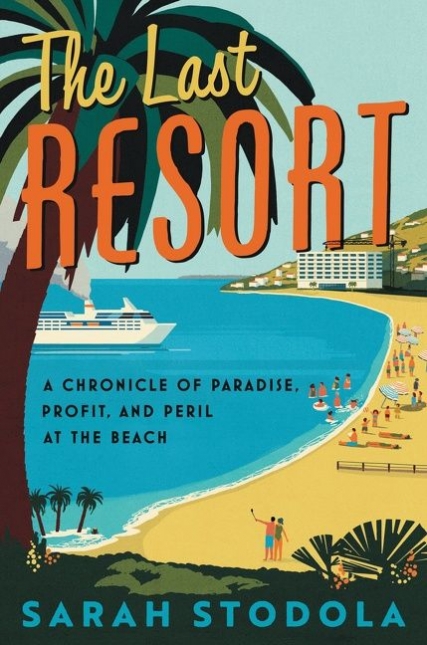 At the end of this school year, I posted a video of crashing waves on Facebook and captioned it for exhausted teachers everywhere: “I hope you find your beaches this summer.” Lots of people liked the post, but author Sarah Stodola eviscerates the whole idea of finding your perfect sandy spot in her new book, The Last Resort: A Chronicle of Paradise, Profit, and Peril at the Beach.

Apparently, “Find your beach” is a meme that originated from the rise of beach tourism in mid-19th-century England. Prior to that time, humans were largely fearful of the seas. There have been great seafaring peoples throughout history, to be sure, but oceanside R&R is the product (like so many modern things) of the emergence of a middle class.

What transformed beaches into big business was a growing population that could afford to take a week off in the summertime, and adequate infrastructure to make travel possible. American and European beachgoing rose dramatically thanks to post-WWII affluence; now, China and India, too, have gigantic middle classes wanting to find their beaches.

Today, tourism is estimated to be a $9 trillion industry, the third-largest export business behind chemicals and energy. Enabled by the annual movement of 1.5 billion people across international borders, the tourism industry provides more than 10 percent of all jobs globally and accounts for 10 percent of world GDP.

There are 7,000 beachfront resorts around the globe, not counting small hotels with fewer than 10 beds. On Expedia and Booking.com, Stodola found more than 2,500 beachfront or beach-access properties in just three locations: Florida, Spain, and Thailand. In the Vietnamese resort area of Da Nang alone, there are 322 hotels — more, it turns out, than Miami Beach. Not surprisingly, covid hit the industry hard, but revenues are already rebounding.

The evolution of beach resorts from low-key, hidden pieces of heaven to flashy destinations is clear to anyone who’s been paying attention, and Stodola’s telling of the tale makes for perfect vacation reading. Drawing on interviews from wizened resort founders, retired hotel managers, and that old travel writer’s standby, omniscient taxi drivers, she shares the stories of 23 seaside resorts from Brighton to Bali and Monte Carlo to Malaysia. Summoning past, present, and future, she has produced in The Last Resort a tale that is at once informative, salacious, and foreboding.

Among others, the author introduces us to white Westerners Claude and Petra Graves, who arrived on Sumba in the Indonesian archipelago in 1988 looking for “an island too big to be circumnavigated by foot in one afternoon, with good sand quality, a natural channel for boats coming in and out, a nearby surf break, good fishing, and good diving” on which to build a resort.

“They needed it to be sparsely populated,” Stodola continues, “but with an interesting local culture, a landscape with hills and contours, a beach contained by headlands on either side, and a location within four hundred miles of a major airport.”

The Graves found it all on Sumba — including, in Claude’s words, locals who were “scared shitless of the water” — and proceeded to create one of the best-known high-end resorts of all time, Nihi Sumba. These days, writes Stodola, “staying at Nihi Sumba for a week in one of Indonesia’s poorest regions can cost roughly the amount I made in my first year out of college.” While there, she had her own butler who could be beckoned via WhatsApp.

Tropical resorts from Waikiki to Senegal have all had a similar story of a white man’s pioneering discovery, followed by the whiff of neocolonialism beneath the flowering scent of economic opportunity. The locals, in most cases, become a servant class to a white, often wealthy clientele and management.

Caribbean resort workers may be the most restive lot, perhaps because they’ve seen neocolonialism up close for longer than most. And while resort employees are typically better paid than their peers working in other industries, when their uniforms come off, they, like other locals, are often denied access to the best beaches. Assuming the beaches still exist.

Ibiza (Spain), Goa (India), and Cancún have become sprawling nightclubs whose beaches are mostly a cover story. While Goa and Cancún still have some actual beach life, the oceanfront in Ibiza is derelict. Likewise, Acapulco, the Rockaways in Queens, and other once-desirable locales are ghosts of their former charming selves because of neglect, overdevelopment, and now climate change. Once, they even built a floating hotel near the top of the Great Barrier Reef in Australia. It didn’t work and was eventually towed to Vietnam, where it sat for years before being transferred to North Korea.

Meanwhile, Malaysia’s Tioman Island sees one potential path to a sustainable future: Grind beer bottles into sand, thereby solving two problems — waste management and beach erosion — at once. The ocean eats up a lot of the sand we want our beaches to have. Some of our best-known beaches, in fact, are desirable destinations only because truckloads of sand were brought in to build up the expanse between hotels and the water. What a fantastic euphemism it is to call this environmental degradation “beach nourishment.”

Stodola doesn’t mention it, but the Outer Banks of North Carolina, where many from the Washington, DC, region find their beaches, is in the throes of heated debate over new taxes to support yet another beach-nourishment project.

Stodola argues that the biggest harm of beach resorts doesn’t come from the imported sand, but from the long-haul flights tourists take to reach it. The climate damage from global travel, which is only increasing, is a hard problem to solve. How can you enjoy Tioman Island’s beer-bottle sand without flying for hours to get there? Somehow, nobody is suggesting tourism become localized even though the carbon generated by journeying to enchanting faraway spots is the very thing raising sea levels and threatening those spots.

Oscar Wilde might have said we can wrestle with these difficult thoughts and still have a good time. So, if you’re looking for something to read as you stretch out on the nearby sands of Ocean City, Maryland, or the distant beaches of Tahiti, pick up Sarah Stodola’s The Last Resort. It’ll give you the perspective to better appreciate where you are even as it makes you feel guilty for being there.

Sunil Dasgupta teaches politics and government for UMBC at the Universities at Shady Grove in Rockville, MD, and hosts a cheeky local podcast called “I Hate Politics.”

Lady Bird and Lyndon: The Hidden Story of a Marriage that Made a President

The story of a woman as impressive as the man she perpetually stood behind.