WIRoB President David O. Stewart reviews this collection of short stories that exposes the gritty side of Staten Island.

I last lived on Staten Island 38 years ago. Then again, I’ve never left.

Maybe other home towns exert the same grip. I wouldn’t know. I only have one home town, even if I don’t live there. Its grip is relentless.

It has something to do with being an island. Water on all sides. Until they took the tolls off the ferryboats, you had to pay to leave. Insularity is unexpected in the midst of the nation’s largest metropolis, but it’s real. The local newspaper, for which I once wrote, refers to those born on the Island as “native Islanders,” conjuring weird visions of grass skirts and tiki drinks.

It probably has more to do with Staten Island’s complete lack of social cachet. No one has ever said to me, “You’re from Staten Island? I just love Staten Island!” People from New Jersey and Long Island feel superior. Imagine that.

My Staten Island, the one I’ve been carrying around for 38 years, has a sharp ethnic consciousness. Terms like spic and guinea and mick are descriptive terms, used in polite conversation for their descriptive power. Not always polite, I suppose, but usually.

Staten Islanders who command the attention of the great world also tend to be outsiders. Cornelius Vanderbilt, the barely literate robber baron who strong-armed his way to the largest fortune of his generation. Jeb Stuart Magruder, the clueless apparatchik who facilitated Richard Nixon’s Watergate crimes. Christina Aguilera, the belter with a big voice and preternatural gift for attracting attention. 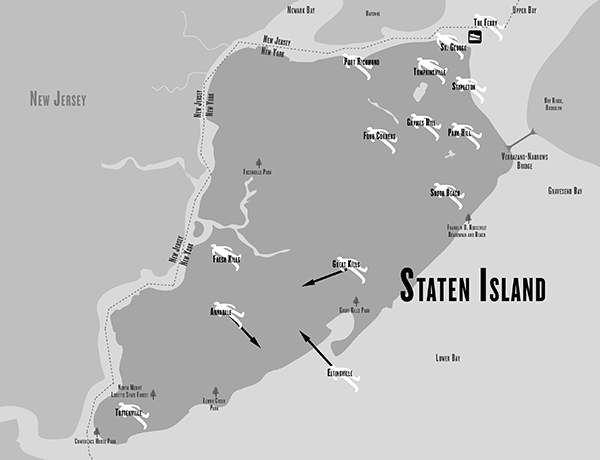 Actually, my Staten Island holds a couple of dozen Staten Islands, islands within the Island, defined by neighborhoods or ethnicity or shared interests. Some have the culture of Calabrian hill towns. An eighth-grade classmate had to move to Jersey because he got his girlfriend pregnant and her family was gunning for him. For a week, I lay awake nights trying to get my brain around every part of that story. Other neighborhoods have been black for generations, some even founded by freed slaves after the Civil War.

There are islands of literacy. A high school classmate, morbidly obese, donned a smoking jacket after school and contentedly read pornography and classic literature until dinner, never giving a thought to schoolwork. Two other classmates, one the son of a policeman, avidly worked on composing an opera.

Islanders learn to be wary. In junior high school, we bought our pants a size too large so we could wear gym shorts under them. Sure, it chafed in the crotch, but it was better than having to venture into the boys’ locker room during gym class, a lair containing unknown evils — or the too-well-known John Gionfriddo.

I have long thought Staten Island a perfect fictional universe for a gifted novelist, offering all the richness of William Kennedy’s Albany or Philip Roth’s Newark. My first foray into writing was intended to be the Great Staten Island Novel, though the result was appalling on too many levels to catalogue. Nevertheless, this journal bristles with literary talents nurtured on the Island: from Larry DeMaria to Jay Price to Steve Goldstein.

So I could barely contain my excitement when I discovered a short-story collection, edited by Patricia Smith, titled Staten Island Noir. Finally, literary recognition for Richmond County (the Island’s formal name, sort of a municipal nom de plume). It is one of a series of “noir” collections featuring different cities and regions.

A sensitive soul might take offense that the Staten Island noir collection was produced after several dozen were published featuring other communities, more socially acceptable places, including … Portland? I turn away from resentment. Islanders, as this collection illustrates, have no talent for sensitive.

Smith’s introduction is a revelation. She knows the Island I have in my head. It was like finding a literary sibling, separated since birth. Smith’s Staten Island is “a Greek chorus on Thorazine, shuffling in the shadows and moaning a soundtrack of regional discontent.” Her story in the collection, “When They Are Done with Us,” is highly noir, but also is a 21st-century/ripped-from-the-headlines tale that explores core family terrors that we can’t admit, but can’t deny. It also won the Robert L. Fish Award from the Mystery Writers of America for best first mystery story.

Like all collections, this one has many voices. There is much focus on the Fresh Kills dump, which was once the world’s largest landfill and its largest manmade structure. Talk about a powerful metaphor, particularly for a walk on the noir side. But the Fresh Kills stories didn’t grab me so much.

I was knocked out by Eddie Joyce’s “Before It Hardens,” which brilliantly captures the transition to adulthood, the fleeting experience of freedom and power while on the cusp of submitting to brutalizing convention and the equally brutalizing need to make a living. This is noir at its most quotidian, and its most universal.

Though I don’t usually like magical stuff, Michael Largo made me buy it in “Paying the Tab,” only partly because the bar he deftly describes felt like one I used to like on Forest Avenue, which served great hamburgers. And Linda Nieves-Powell’s story — “The Fly-Ass Puerto Rican Girl from the Stapleton Projects” — annoyed me because I didn’t know exactly what happened, but still it lingers on my mind and won’t go away. In “… spy verse spy …,” Todd Craig deploys African-American and street drug talk to confuse and amuse, while placing the reader in a killer’s intermittently rational head. It’s a great ride.

And so is Staten Island Noir. It won’t make you a native Islander, but you may start to get the gist.

David O. Stewart is the author of The Lincoln Deception, a historical novel about the secrets behind the John Wilkes Booth Conspiracy, which Kensington Books will release in September 2013. He has written three books on American history: The Summer of 1787, Impeached and American Emperor. Stewart is president of the Washington Independent Review of Books and a proud member of the Hall of Fame of George W. Curtis High School in St. George, Staten Island.