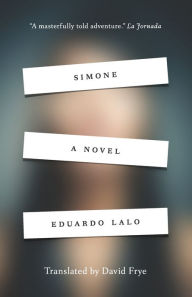 The anonymity of city life and the existential angst of the artist have been literary themes since the early 20th century. But instead of portraying the crushing soullessness of a grey urban behemoth such as New York, London, or Dublin, Eduardo Lalo describes another kind of city: San Juan, the tropical metropolis we usually associate with vivid colors, balmy breezes, and good rum. Yet San Juan can be as dehumanizing as any other capital, and a Puerto Rican artist can be as demoralized by the industrialization of art as artists from other places.

Simone’s unnamed protagonist is an archetypal college professor and marginally significant writer. Frustrated and bored, he goes through life without forging meaningful relationships. He is unable to communicate, even in his imaginings. Early in the novel, he describes a dream he had about a colleague in which they spoke “briefly and unintelligibly,” then kept having to separate, producing the impression that the whole thing was “a long, drawn-out, missed connection.”

Immediately afterward, the writer recounts a real-life meeting with a young man whose name he cannot remember. The man has been ill, but the protagonist can only give him “the banal support that a stranger might offer.” Simone is reminiscent of Albert Camus’ 1942 masterpiece, The Stranger, a study in alienation and impotence. The writer’s life is indeed a series of missed connections. He is disconnected from everything and everyone.

Always on the move, he drives and walks through the city, giving the reader a virtual tour of San Juan. Yet in this metropolis of nearly 400,000 people, he has the impression that nothing is happening, and that everyone is insignificant: “Nothing that I or people like me could do would create more than passing waves in a pond.” He willingly sinks into oblivion, satisfied to live in an innocuous apartment. Sometimes he spends the night in the house of an acquaintance who is out of town because no one will know where he is, and so no messages will be waiting for him.

He avoids pain by contriving to keep people out of his life. His solitude becomes “both a chrysalis and an offensive weapon.” Nothing seems to interest him — not his work at the university or even his writing. When he goes to the movies, he remarks only on the stupidity and sameness of the films.

When he sees a little boy sitting by a building, all he can think of is the drabness of the life this child will have. “I had an impulse to keep this boy from suffering,” he writes, “but all I did was finish my coffee and leave.” His colleagues, with their endless conferences and name-dropping, revolt him. The city around him dispirits him.

This tedious existence makes for tedious reading. Fortunately, the writer’s life (and the novel) start to get interesting when puzzling notes begin to materialize, piquing the writer’s curiosity. Lalo does not draw out the mystery long enough to create real suspense. The author of these notes, who often signs “Simone,” turns out to be a Chinese student named Li, who drudges in a shabby Chinese restaurant where the writer sometimes eats. Against all odds, Li has managed to complete school and enroll at the university. A voracious reader, she devours philosophy and has a predilection for Simone Weil, whom she often quotes.

The writer embarks on a bizarre affair with Li, who places frustrating restrictions on their intimacy. Despite her idiosyncrasies, the affair energizes the writer. Li not only possesses boundless intellectual curiosity, but also artistic talent. With her, the writer discovers a new joy in his own creativity. Together they initiate projects that take them to every corner of San Juan.

As the writer follows Li to her local haunts, he comes to know the hard world of Puerto Rico’s small Chinese minority, where sexual abuse, long hours of labor at oppressive wages, and clan control are the norm. Locked into a ghetto in which they are constrained by poverty, custom, and language, San Juan’s Chinese are as divorced from mainstream society as the writer. Alienated and eccentric, the writer and Li find solace in books and in each other, and both are at home in the cold, impersonal city. Eventually, however, Li’s brutal past catches up with her, and she disappears, forcing the writer to interact with others.

In his search for his young girlfriend, the writer finds himself at a party given by an attention-seeking colleague named Carmen Lindo, whose relationship with Li threatens his own. At the gathering, he and a fellow writer, Máximo Noreña, become embroiled in an argument with García Pardo, a Spanish author who is Carmen’s guest of honor.

Venting their intellectual frustration, the two Puerto Ricans attack the Spaniard. Noreña mocks the “superstition…about the great, common, Hispanic world,” in a clear condemnation of the Pan-Hispanism currently sweeping both academia and the publishing industry. He ridicules García Pardo’s defense of Spain’s publishers, arguing that they survive by producing translations and second-rate books. “The book industry is in the process of annihilating literature,” complains Noreña. Writers like him and the protagonist are “castaways,” survivors of “a world that will never exist again.” Furthermore, Puerto Ricans are virtually excluded from the business of books as it exists in Spain.

When Li comes back, the writer must make a decision. His future lies in his own hands. He can choose to embrace love and seek happiness or to return to his safety zone, where his benumbed soul languishes and nothing ever happens.

Simone is certainly a thought-provoking book. The descriptions of Li’s abysmal circumstances — she lives practically in servitude — shed light on an almost unknown aspect of Puerto Rican reality. We are far more used to reading about the plight of Puerto Ricans in New York than about minorities in San Juan. Lalo’s dark portrayal of a sunny Caribbean city turns the conventional urban novel on its head, and his characters’ blistering condemnation of the book industry and the notion of Hispanic unity is bound to raise eyebrows. Although the protagonist at times comes across as whiny, Lalo’s distinct perspectives make Simone a surprising adventure and a worthwhile read.

Bárbara Mujica is a novelist and professor of Spanish literature at Georgetown University. In addition to a Ph.D. in Spanish, she holds an M.A. in French and studied at the Sorbonne. Her latest novel is I Am Venus, based on the life of the Spanish painter Diego Velázquez. She is also author of Frida and Sister Teresa, based on the lives of Frida Kahlo and Teresa de Ávila, respectively. This year, she won first prize in the Maryland Writers’ Association Fiction Competition for her story “Jason’s Cap.”

Someone to Watch Over Me

A stiff protagonist and action left off the page undermine this thriller.