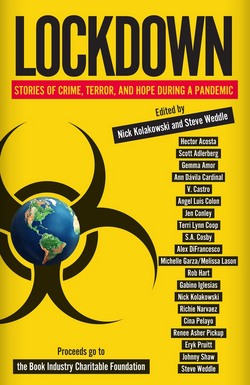 Lockdown gathers several voices from the roster of award-winning Polis Books authors — including Hector Acosta, Ann Dávila, Jen Conley, S.A. Cosby, Cina Pelayo, and others — who worked in overdrive to finish the anthology in record time. Proceeds from the collection, according to its cover, will go to the Book Industry Charitable Foundation.

Editors Nick Kolakowski and Steve Weddle curated a total of 20 stories, each of which shows different aspects of living in lockdown. Sometimes, difficulty brings out the worst in people, and some of the tales dive deeply enough into the issues that the collection reads as a study in human nature.

Take, for example, “Everything Is Going to Be Okay,” by Gabino Iglesias, featuring a man desperate for money to cover his wife’s medical bills. When presented with the opportunity to put his hands on some cash, he learns committing a crime is the only way to make it happen. The man’s moral compass is put to the ultimate trial by fire.

In “The Diamond,” by Gemma Amor, a young man is in lockdown with a group of friends and his recent ex-girlfriend. Envy, jealousy, covetousness, and fear rear their heads after the group finds a large diamond inside their house.

While some of the stories take place during the pandemic, others dare to go forward in time and provide a glimpse of what the future may bring. It doesn’t look reassuring.

“Herd Immunity” by Eryk Pruitt, for example, is a haunting tale about a looming dystopia that, given current — and recent — events, seems all too plausible as new social norms take form in reaction to the pandemic.

Alex DiFrancesco penned “Outpost,” an alluring piece of fiction that, at times, resembles a classic Western tale, except for some fantastical elements that place it in another category altogether.

The stories are varied and written in different styles and points of views, from traditional third-person past tense, to the unusual second-person present tense. However oppressive the present feels or dark the future may be, what binds these stories together is the fact that life always finds a way.

Some readers might be put off by the idea of reading stories that seem taken directly from today’s news. It begs the question: Is it too soon to be writing about the lockdown, the virus, the ways they’re affecting lives on a daily basis, and how society may evolve afterward?

Despite that sentiment, or maybe because of it, the featured authors went to great lengths to ensure that quality narratives are contained herein. It is worth reading and savoring these stories and — why not? — even fearing the possibility that some of them might come true.