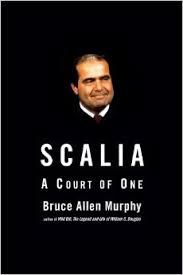 First and foremost, Scalia: A Court of One is a biography of an idea, namely, originalism. It is an idea that, in assorted forms, has long held varying degrees of sway in the interpretation of religious and legal texts. It is also an idea that is inextricably linked to a man who is much in today’s legal news, Justice Antonin Scalia. Take the dye of originalism out of the Scalia beaker and what is left is a mix of operatic bravado and old-fashioned conservatism — psychologically interesting but hardly enough to warrant the remarkable attention this Trenton-born jurist receives in the legal profession and academy.

Six words describe him best: brilliant, combative, dynamic, opinionated, relentless, and religious. All of those words come into play in Bruce Allen Murphy’s intellectual biography of this highly influential Justice who would readily overrule several of the landmark rulings associated with constitutional liberalism. And originalism is the fuel that drives the conceptual engine.

In Murphy’s hands Scalia’s Big Idea is explained vis-à-vis its relation to an aspiring and determined young man who, with the aid of a deeply Catholic upbringing and education, worked his way up the professional ladder. In Scalia we witness “Nino” forging his way through Harvard Law School to various positions in the Nixon, Ford, and Reagan Administrations, while sweetening the intellectual pie along the way with teaching posts at Stanford and the University of Chicago Law Schools. It is a story of both resolve and foresight, of a man determined to make his mark in life and law. Since the story is largely about a Big Idea, one does not get a revealing sense of a more multidimensional man, one who can just as easily be witty and charming as he can be arrogant and abrasive.

Aided by a rich array of notes and bibliographical sources (93 pages of them!), the idea of originalism takes on emerging force as Scalia’s career unfolds, replete with expected accomplishments and unexpected rejections. Murphy documents how Scalia’s views on originalism and textualism developed and were refined as time passed and need demanded. In his biographical weave, the author (a Lafayette College political science professor) stiches together the case for his claim that Scalia’s ultra Catholicism and ultra conservatism are inseparable despite the Justice’s fervent denial of such (at least as portrayed by Professor Murphy).

There is no negating it: It is a daunting task to write a measured and accurate biography of a public figure as complex and controversial as Antonin Scalia. Of course, Professor Murphy has plenty of experience in writing judicial biographies. He has authored big books on Justices Louis Brandeis, Felix Frankfurter, William O. Douglas, and Abe Fortas. Still, to venture to criticize a man’s religious beliefs, even when he boasts openly of them, is a risky enterprise in today’s America. It is also chancy to dive into the polarized waters of the doctrine of constitutional originalism debate, even when one does not link the Justice’s constitutional jurisprudence to his religious convictions. But venture and dive Murphy does, and this with varying degrees of objectivity. No doubt, this biographical undertaking will receive excited applause from liberals and bitter condemnation from conservatives. Such is the indelible ideological ink of our times.

Justice Scalia’s originalism — brazenly featured in his 2008 Second Amendment opinion in District of Columbia v. Heller, a 5-4 ruling — is as good as any a dividing line for demarcating contemporary conservatism from modern liberalism. To be sure, there will be times when originalism pleases liberals and displeases conservatives. But over the long arc of time and cases, it is a doctrine more aligned with the constitutional creed of conservatives than with the constitutional faith of progressives. It is also a doctrine, like all others, that is subject to manipulation. In all of these respects and others, Professor Murphy tells his biographical story with case after case in point, flagging (and evaluating) disputes between Justice Scalia and his critics, be they Justices or law professors.

In the long run, will Justice Scalia’s legacy be that of a solo pilot as the title of this book suggests? Or will it be that of a jurist who reinvigorated an interpretive idea that launched a thousand jurisprudential ships? Will his unwillingness to build consensus at the expense of his orthodoxy be judged as an egotistical mistake or a principled advantage? Though this biography is not beyond critical evaluation, Scalia provides a rich and needed body of information by which to begin to answer such questions.

One final observation: In our all-or-nothing political and legal worlds, the partisan divide is so great that few dare grant an ideological inch. It is as true as it is paradoxical: Originalism is bad vs Orginalism is good. That pretty much depicts the rudimentary mindset by which today’s liberals and conservatives approach constitutional questions. In the argumentative process, objectivity is forsaken, nuance lost, and justice denied. And why? The answer: too often too many are too determined to cling to their biases.

Meanwhile, the combatants remain oblivious to the cultural devastation they cause.

Ronald Collins is the Harold S. Shefelman Scholar at the University of Washington School of Law. His latest book (co-authored with David Skover) is When Money Speaks: The McCutcheon Decision, Campaign Finance Laws & the First Amendment (Top Five Books, 2014).