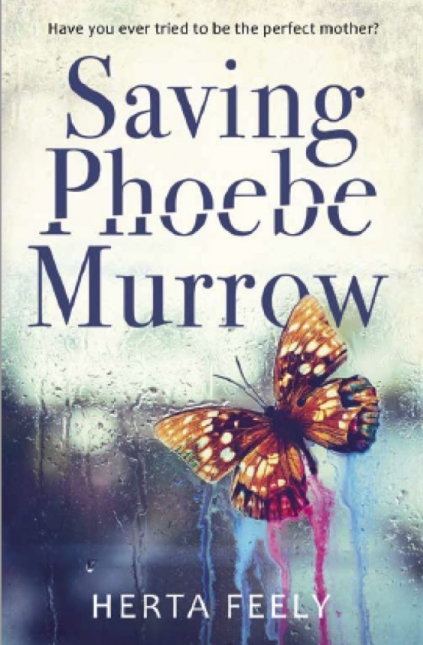 As Snapchat, Instagram, Groupme, and god-knows-what-app-is-next give teens endless chances to hide their drama behind a smartphone lock screen, the days of cyberbullying over Facebook can seem downright old-fashioned. But in Saving Phoebe Murrow, Herta Feely brings this issue back into the spotlight, reminding us all of the heartbreaking fragility and mystery of the teenage mind.

Based on the true story of 13-year-old Megan Meier, who was driven to suicide due to online harassment, the book tells the story of high-school freshman Phoebe Murrow. On the brink on 14, Phoebe’s looking to start over at a new school. She loves boys, her friends, secondhand stores, and fashion. She also has a history of self-harm brought on by intense bullying in middle school.

This has left her mother, Isabelle, deeply shaken and willing to do anything to keep her daughter safe. This mission leads Isabelle into conflict with both her daughter and fellow mother Sandy, who subscribes to the "I'd rather you try it in the house" parenting code.

Certain moments in the book hold emotional weight: the helpless parent trying to make sense of their child; the adolescent pressure to fit in; and the crippling fear that everyone knows how badly you want it.

For the most part, these themes transcend the page and take on a life of their own, guided by each reader’s experience (because who hasn't struggled to connect to a parent, child, or peer?). But there are times where Feely’s writing drags down the story, lessening the impact of the themes. Her tendency toward the overly serious, combined with the after-school-special subject matter, plays as overwrought at times.

The novel traverses the murky territory between sincerity and melodrama, and on occasion falls on the wrong side of this line. To me, the real danger of this approach is that Feely inadvertently seems almost to sensationalize or trivialize the very real issues of teen depression and self-harm, even as she gives these issues a platform.

However, part of the disconnect I had with the heart of the story lies in personal preference rather than technique. Feely plays tragedy and despair as straight as it comes, unlike the many novels today that embrace an edgy, dark comedy. As a modern reader, I've developed a kind of aversion to the overly sentimental, and Feely isn't afraid to challenge this.

Questions of authorial voice aside, Feely manages a finely crafted plot that juggles a bisected timeline and multiple characters’ interior lives. The first part of the novel ends on a cliffhanger before rewinding two months and filling in the intervening gaps.

With just a glimpse of how the story may unfold in the end, readers are kept invested in catching back up to the present. By frontloading certain information (Isabelle’s helicopter parenting, Phoebe’s history of cutting), Feely keeps up a current of suspense that relies not on what the reader doesn’t yet know, but rather on what they do.

Feely’s careful and methodical layout provides just enough information in each chapter to keep readers engaged, while allowing space to explore each character’s decisions from inception to consequences. I appreciated her willingness to acknowledge the different ways characters are at fault for the various fraught relationships in the book.

By exploring the characters’ mistakes without necessarily excusing them, readers are by turns outraged by (and on behalf of) those characters. This thoroughness is part of why I was left so troubled by the characterization of Sandy, the mother of Phoebe’s best friend and an eventual rival of Isabelle. The jarring decline from sympathetic social outsider to conniving sexpot felt like taking the easy way out, providing a textbook villain — not to mention the uncomfortable notion that Sandy’s sexuality is somehow connected to her malevolence.

Saving Phoebe Murrow is a narrative hit with a few tonal misses. As a Maryland resident, I was first delighted and then quickly tired by the name-dropping of DC locales, from the Five Guys in Adams Morgan to Westfield Mall. But make no mistake, this book is satisfyingly coherent and compulsively readable.

Emily Harburg is the Independent’s former reader-relations intern. She is a junior at Yale.