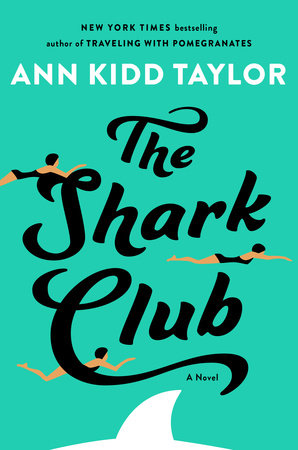 Here is a book that commands its readers to sit above the tide line, toes idly excavating sand divots, beneath an umbrella throwing deep shade under a cloudless blue sky. The sun-drenched Florida locale is so strong that if you’re not somewhere comparable, your longing will make it tough to concentrate.

This ultimate beach read is the debut novel of Ann Kidd Taylor, daughter of acclaimed novelist Sue Monk Kidd. The two previously collaborated on a bestselling memoir, Traveling with Pomegranates, in which young Ann ponders her direction in life. Apparently, her direction is to go into the family business.

It’s not a bad choice. The Shark Club is a beach read with a brain, anchored as it is in its first-person narrator, Dr. Maeve Donnelly. Maeve is a marine biologist who specializes in sharks, and who spends as much time as possible pursuing their research the world over. Maeve has loved sharks from the time she was bitten and nearly killed by one — coincidentally, seconds after her first kiss with her first love, Daniel.

Maeve’s backstory is related through a combination of straight-up exposition and occasionally a more nuanced revisiting of crucial episodes. Before the shark incident, at age 6, Maeve and her twin brother, Robin, were suddenly orphaned when their parents’ small plane crashed in the Everglades.

Since then, they have lived with their grandmother Perri in the literary-themed hotel she owns on an island off Florida’s Gulf Coast. Daniel, three years older, befriended them both soon after they arrived. He is a kindred damaged spirit since his father simply up and left one day, abandoning Daniel and his mother.

Taylor has good impulses, but she needs to give this story more room to breathe and let things play out organically. Her tendency to tell rather than show speeds the narrative along but stymies our ability — or desire — to invest in the characters. The formative things that happen to these people feel more like convenient plot points than critical elements that shape who they become.

The most fully realized character here, the one that Taylor gets pitch perfect in three dimensions, is Hazel, Daniel’s 6-year-old daughter — and the overt reason Daniel and Maeve are no longer together. Silly, serious, and completely unselfconscious in that way of young children who haven’t yet been molded into conformity, she is the rare child character for whom the term “precocious” isn’t code for “irritating.” Hazel is a fan of prehistoric sea creatures and carries around a dinosaur messenger bag filled with supplies for whatever adventure she’s currently on.

She and Maeve meet on the beach just as Maeve arrives home again to the Hotel of the Muses for a few months in between a long research stint in Bimini and an upcoming trip to Mozambique to study whale sharks. Just as she was leaving Bimini, Maeve struck up a nascent romance with fellow researcher Nicholas.

It only takes a few minutes for Maeve to realize that she’s talking to Daniel’s daughter, the product of a fling that Daniel had while Maeve was away on her first big research trip — a trip that caused her to postpone their wedding.

After learning of his dalliance and impending fatherhood, she cancels the wedding and never speaks to him again. But here is Hazel, and with her, Daniel, now an acclaimed local chef running the hotel’s restaurant. He’s moved them back in with his own mother now that Hazel’s mother has — honestly? — recently died.

In with all of this, Maeve discovers that someone is running a local shark-finning operation, the horrifying and illegal practice of catching sharks, slicing off their dorsal fins and tails, and throwing them back in the water to die in order to supply the black-market demand for shark-fin soup.

And last, Maeve’s brother, Robin, a charming ne’er-do-well who’s been a failed writer for years, has a book contract. Only Maeve doesn’t clue into why Robin is so gravely insistent that she read the novel he’s written.

Taylor gives her characters significant baggage, but provides only cursory follow-through in illustrating what it means to them. She needs to signal to her readers that at least she understands that Maeve and Daniel (or, for that matter, Maeve and Robin) in their 30s have no greater capacity or willingness to hold an adult conversation than they did seven years earlier, and that perhaps this is one of the common effects of their shared abandonment. It’s only in considering Hazel that they demonstrate real maturity.

Perhaps it’s not fair to demand that level of depth; after all, this is vacation reading, and Taylor absolutely knows how to keep the pages turning. It simply feels that with a little more investment, she could have delivered a whole cast of believable, well-rounded characters to go along with her young star.