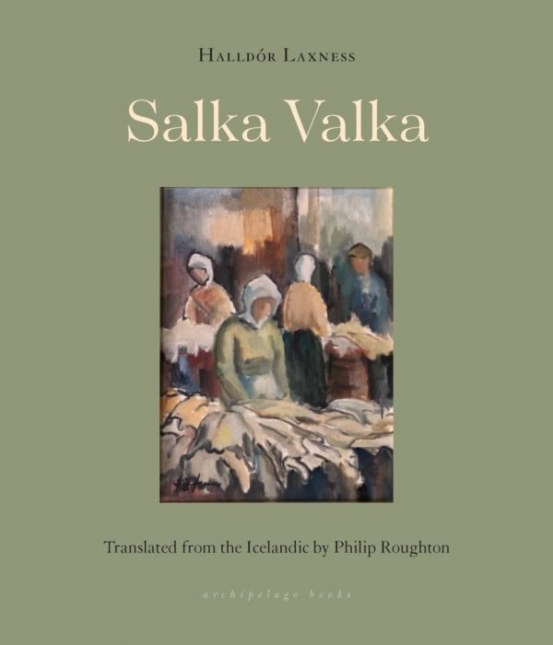 Great literary characters, like great loves, stay in our hearts forever. Such a character is Salka, the central figure in the epic tale Salka Valka from Icelandic Nobel Laureate Halldór Laxness. Much to the distress of her many fans worldwide, Salka and Laxness’ eponymous novel about her have been largely unavailable in English for decades — hardcover copies run upward of $100. But now, admirers have a new, less expensive Salka, thanks to a fresh translation by Philip Roughton.

Readers who’ve never heard of this fierce, crude, uncompromising, independent, isolated, enterprising, vulnerable daughter of Iceland’s frigid sea and narrow fjords will meet a character who would be as at home at today’s #MeToo rallies as she was nearly a century ago in the tiny village of Óseyri.

That’s where 11-year-old Salka and her destitute mother, Sigurlína, set ashore one night in the middle of a blizzard. The steamer’s first-class passengers look at the tiny village and ask themselves, “How do people live in such a place?...And how do they die?” while Salka gamely descends the rope ladder to a launch bobbing in the storm-tossed sea.

“I made it, Mama. It was terribly fun,” she calls to the reluctant Sigurlína hovering on the deck above.

But almost nothing about Salka’s life is fun, and her shout that fateful night is meant to reassure her tremulous parent rather than express childish enthusiasm. Without money enough to reach their intended destination, Reykjavik, Salka and her mother have landed in a place where a vegetable patch is a luxury, and milk a commodity almost as dear as gold. A place where “human life is all fish and from fish and the people are a phenomenon concocted by the Lord from fish.” And where absolutely nothing is given without something being expected in return.

The price that Steinƥór Steinsson, a near savage drunkard, exacts for helping Salka and her mother find a place to stay is to grope Salka. When the girl reveals this, Sigurlína replies:

“Dear Salka, we must promise each other always, always to remain good friends and help each other in goodness in Jesus’ name, no matter what happens…Because there are so many things that can happen to two girls.”

Later that night, when her mother accepts Steinƥór’s advances, Salka realizes she’s utterly alone. So she goes to the shed where Óseyri’s womenfolk clean fish and requests a job.

“Who’s responsible for you?” asks the foreman. “I am,” answers Salka. Big for her age and strong, she soon spends her days washing fish and her nights learning to read, thanks to the efforts of Arnaldur, a boy only two years her senior.

Steeped in Iceland’s foundational epics, Laxness uses his villagers like a Greek chorus — not quite individuated but critically important. While their lives are unspeakably hard, their hearts thrum with Iceland’s proud heritage:

“Here in Óseyri dwelled descendants of the ancient Vikings, as prepared now as in the Golden Age to defend their independence.”

In other places, Laxness wields his chorus as an object of humor, and in yet others as unsympathetic, gossipy observers of Salka’s struggle to survive after Sigurlína dies and Steinƥór and Arnaldur compete for her heart.

Above Óseyri’s squabbling inhabitants floats an observant, detached narrator who relates the vast scope of human frailty, longing, striving, pettiness, fear, and self-delusion unfolding in the mean little village. “People have such lofty ideas about the world…They have such a hard time understanding that world is right here in Óseyri in Axlarfjörɖur.”

Without any hint of protest, and with a mythopoetic tone befitting the epic reach of his story, the author simply relates the soul-crushing poverty Óseyri’s people endure and Salka’s struggle to be true to herself despite her circumstances.

Doubtless, modern-day feminists will see in Salka an admirable example of female fortitude and resolve. And certainly, she is that. But she’s also much more. She is the ultimate realist, and she applies her clear-eyed vision with equal intensity to the price of fish as to the price love will exact on her heart.