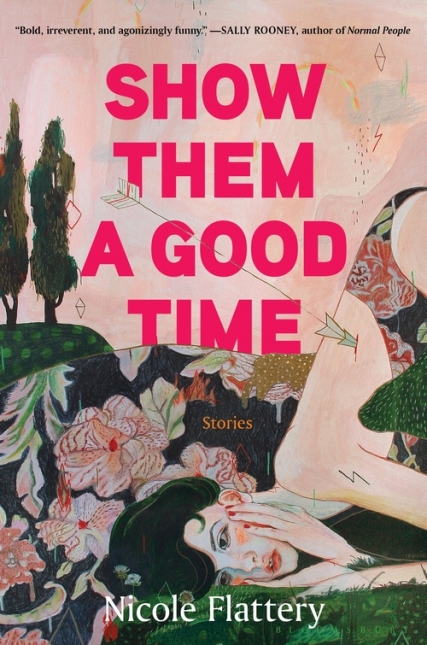 The main characters in Nicole Flattery’s excellent debut story collection, Show Them a Good Time, are women stuck in familiar roles: the too-young girlfriend of a fading celebrity, the student sleeping with her professor, the reluctant stepmother trying to connect with her new husband’s troubled son.

They didn’t exactly choose the situations in which they find themselves. But neither were they forced. Instead, they’ve drifted into them by following a cultural script about the shape adult life ought to take, the limited set of available possibilities.

With varying degrees of earnestness, they try to fit themselves into these predetermined categories, deploying, in the process, inadequate clichés to describe and organize their lives and their emotions. “Enjoy yourself. We’re having a liaison,” one of the characters instructs her older, married lover during a particularly miserable restaurant dinner. “Let me tell you about my childhood.”

“I just don’t think this job is bringing out the best in you,” a mother tells a daughter who is working at a petrol station after leaving an abusive boyfriend and a life performing in pornography. “It’s against capitalism,” a woman gleefully proclaims to justify her habit of shoplifting.

The world in which these stories unfold is strange, menacing, and surreal. Occasionally, it verges on fantastic. In “Not the End Yet,” the protagonist, Angela, goes on a series of bad internet dates as the apocalypse closes in. In “You’re Going to Forget Me,” one of two sisters who may have been abducted by aliens as children begins to forget an increasing number of seemingly random things: how to make small talk, how to kiss, the word for fork.

Reading these stories, you’re never quite sure what to expect, what bargain characters have struck with reality. At times, the tales progress according to realist conventions; at other times, according to a dream logic in which characters’ reactions seem displaced or condensed, wildly disproportionate or slightly off-key.

People in these stories accept, without batting an eye, things that strike the reader as deeply bizarre, like the protagonist of “Hump,” who goes around repeating a single, inappropriate non-sequitur to the guests at her father’s wake because it “was a good word…a word I hoped would get me through the evening.”

Other characters endow mundane things with great significance. The simple act of changing a lightbulb becomes the climax of the title story, in which many far more intense things have occurred. This surrealism permeates down to the sentence level, making each story delightfully surprising and unsettling to read.

In these ways, Flattery’s tales are reminiscent of Donald Barthelme’s short fiction or the stories of Leonora Carrington, in which meaning and desire attach to unexpected things. They are also, like the work of both those writers, extremely funny.

If the collection has a weakness, it’s that the stories all operate in a similar emotional register. All the characters are overwhelmed by life, disoriented, simultaneously painfully self-conscious and uncertain about who they are. Many of them have forgotten key aspects of their own pasts.

Several have boyfriends they secretly (or not so secretly) despise and parents whose own disappointing lives serve as models for what not to do. Still, this consistency of tone allows the stories to build on one another, to reinforce the particular worldview they all share.

By the time you reach the end of the collection, you feel saturated by this outlook. For Flattery’s characters, those things which were held out as inherently fulfilling, the necessary ingredients for a good, middle-class life — education, work, sexual and family relationships — are not nearly as satisfying as they’d anticipated.

The stories deftly capture one of the prevailing sensations of life in this moment, which is that the maps and blueprints we have for how to live, for what our priorities ought to be, seem inadequate. There are powerful forces at work that have not been accounted for.

There are places, however, where they demonstrate a way out of the impasse in which the characters (and us, by extension) embrace the surreal and strange, accepting unexpected possibilities for connection.

Lucy and Natasha, the main characters in the collection’s centerpiece, “Abortion, A Love Story,” forge a deep bond of friendship by ignoring and then dispensing with the man, Natasha’s lover, who introduced them. It seems to be their platonic love for one another to which the title of the story refers, not to the unsatisfying romantic relationships they’ve had with men.

Together, the two women write and perform a play that reclaims their personal histories, removing them from the box of melodrama or tragedy into which they would be most readily slotted and insisting that they can be viewed, in fact, as comedy.

Meanwhile, the stepmother in “Parrot” finds a wholly unexpected way to see her stepson for who he is and to care for him. This is also something that the stories share with Barthelme’s work: Honoring the feelings and desires we’re told to repress can be a way to free ourselves, to wake up, to live on. Nicole Flattery, in Show Them a Good Time, has created a compelling and fascinating first collection, at once vivid and ominous, hilarious and able to walk, unflinching, into the dark.

[Click here to buy Show Them a Good Time from indie-supporting Bookshop.]

A trauma from her past chases a bride-to-be, and the reader, to a gory end.