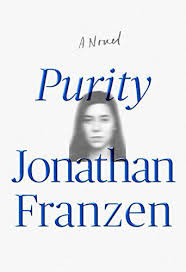 Let’s be frank. There are two camps when it comes to Jonathan Franzen: Either you like him a great deal, or you actively detest his presence in the publishing world.

Here’s something else about those camps — you don’t have to have read Franzen in order to be a member. You might, like a colleague of mine, dismiss him for his haughty views about social media and the state of literature without being able to say a word on the quality of his prose.

Or you might, like a former student of mine, merely appreciate the chutzpah of a person so decidedly unmoved by literary fads and what it means to be “nice.” When asked why you haven’t read him if you like him so much as a person, you might say — as did this student — that you don’t have the attention span for a 600-page novel.

Like my student, I am a fan of Franzen’s reluctance to cave to the dance of popularity. Unlike my student, I’ve actually read him. I’ve read the essays, as well as the “big books” — The Corrections, Freedom, and now Purity — and I’ve enjoyed them all, to varying degrees.

Purity is the story of Pip Tyler, a twentysomething woman weighed down not only by a grotesque amount of student debt, but also by a depressive and oppressive mother. Here’s an amusing passage that does a tidy job of revealing the mother-daughter relationship:

“As soon as she could see the cabin, its door flew open and her mother came running out to meet her, crying ‘Oh, oh!’ She wore an expression of love so naked it seemed to Pip almost obscene. And yet, as always, Pip couldn’t help returning her mother’s hug.”

Later that same evening, buying herself a few moments alone in the bathroom, “Pip saw that her mother had lit two candles by the sink for her, as for a romantic date or religious ceremony [and] she nearly fell apart.”

Pip makes for an ideal heroine: She’s smart but not always well informed; funny but not always receptive to another’s humor; clear-eyed but immature; generous but not without self-pity. In other words, she is a perfect conundrum, ripe for a satisfying reversal.

But every heroine needs a purpose, and Pip’s is to find her father, whose identity her mother has kept hidden for more than two decades. “She had no interest in ‘getting to know’ her father, she already had her hands full with her mother, but it seemed to her that he should give her money. Her $130,000 in student debt was far less than he’d saved by not raising her and not sending her to college.” This flawed but funny logic is emblematic of our early time with Pip.

As with Freedom and The Corrections, Franzen delivers this story in sweeping sections of precise prose, each dedicated to a single and central character. He moves deftly between the minds of a post-millennial, a disenfranchised (and possibly insane) East German Internet revolutionary, a dedicated but heartsick journalist, and still others.

Until Purity, my favorite novella-length chapter by Franzen was the opening 180 or so pages of Freedom, in which Patty Berglund (as her own autobiographer) offers a hilarious and often cruel third-person account of her own life so far: “On the chance that, regarding Patty’s parents, a note of complaint or even outright blame has crept into these pages, the autobiographer here acknowledges her profound gratitude to Joyce and Ray for at least one thing, namely, their never encouraging her to be Creative in the Arts, the way they did with her sisters.”

Franzen is a long-format seducer and, to my mind, with Purity, he has achieved his finest balance yet of a multi-minded universe. More than in any of his novels before, each of the integral characters in Purity seems equally cherished by their inventor, equally doted on, equally agonized over.

Yes, there are countless paragraphs lamenting the pervasiveness of technology in every aspect of our lives (one character equates the Internet with death), but more than anything, this is a novel about friendship (its limitations, but also its possibilities) and unions (sometimes lethal, sometimes naïve, but always proof of the potential in merely being alive).

“Don’t talk to me about hatred,” writes the character Tom Aberant, “if you haven’t been married. Only love, only long empathy and identification and compassion, can root another person in your heart so deeply that there’s no escaping your hatred of her, not ever; especially not when the thing you hate most about her is her capacity to be hurt by you. The love persists and the hatred with it. Even hating your own heart is no relief.” It’s not a rosy view of love, but it’s a thorough and even reverential one.

Purity is a beast of a book. If you’re already a Franzen fan, then you won’t be let down. If you aren’t, this is your opportunity to give his writing a second (or perhaps first) chance.

Hannah Pittard is author of the novels Reunion and The Fates Will Find Their Way, as well as two forthcoming from Houghton Mifflin Harcourt: Listen to Me and Atlanta, 1962. She is the winner of the 2006 Amanda Davis Highwire Fiction Award, a MacDowell Colony Fellow, and a consulting editor for Narrative Magazine. Follow her on Twitter at @hannahpittard.