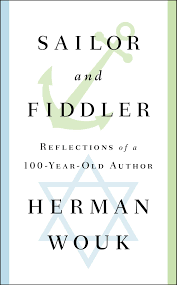 When Herman Wouk’s life began, Woodrow Wilson was president. Automobiles were still a novelty, airplanes won wars, and surmounting space was 46 years into the future. Now, after having lived in two centuries, the unassuming fabricator of The Caine Mutiny and Marjorie Morningstar has published a humble autobiography.

Born in New York to a Jewish family, Wouk’s religious education and assiduous bar mitzvah preparation were commandeered by his rabbi-grandfather. But, by the time he graduated from Columbia in 1934, the author’s interests had veered from philosophical pursuits to editing the university’s humor magazine and composing student musicals. “To hell with all that noise [Judaism]. I’m going to be a funny man.”

And so he was: as a gag writer at David Freedman’s “The Joke Factory” and later for the immensely popular comic radio host, Fred Allen: “Five years with Allen slipped by, especially during the thirteen-week summer layoffs, in the pursuit of la dolce vita by young wise guys with money to spend: travel abroad, callow amours, what you will…”

Twenty-four hours after the attack on Pearl Harbor, Wouk noticed an advertisement in the New Yorker soliciting Naval Reserve recruits ages 18-27. Wouk was 26 — with a draft card — but decided to apply anyway. At first, the coterie of interviewing officers determined he was ineligible, but then “the grayhead in the center was looking through a folder on the desk…Grayhead closed the folder and tapped it. ’I see you’ve written for Fred Allen’…Their faces changed. All were regarding me with lively interest…‘Maybe a man who writes for Fred Allen can do something about that.’”

Hours later, a letter from the radio raconteur asserting his support of Wouk’s enlistment was delivered to the draft board. With that endorsement, Wouk was jettisoned from the Army and catapulted into the Navy. Flush with retroactive inspiration, he boarded the destroyer-minesweeper USS Zane, re-claimed his lapsed Judaism, subsisted on kosher food and monotony, crafted his inaugural book, Aurora Dawn, and composed three plays.

After the war, Aurora Dawn became a modest success, but a second book, City Boy, failed. The prospects for 1951’s The Caine Mutiny did not seem optimistic, either: A prestigious publishing house that had indicated early interest rejected the completed manuscript. Eventually, Doubleday committed — with a sizable advance that included a second book.

With the lucky lucre, Wouk and his Idaho-born, Love-of-His-Life-Partner-Wife impulsively purchased a mansion, overextending themselves financially, and somehow withstood the drowning death of their firstborn son. The burden of the tragedy propelled the culturally religious Wouk to Orthodox observance, a theme he integrated into some of his future writings.

Just before Caine’s release, James Jones’ From Here to Eternity had already begun to mesmerize critics, captivate crowds, and build up bookstores’ balance sheets on every block. Wouk’s novel seemed to be dead — even before its debut.

Then, one day at the Carlyle Hotel, “[Wouk] noticed… a copy of The Caine Mutiny, the first I had seen since Mexico. I was dimly aware that the book had begun climbing the bestseller lists…I went to that table, showed the couple sitting there my picture on the back of the garish jacket, and inscribed the book for them, to their pleased stupefaction. In a month or so my novel overtook From Here to Eternity, became an astounding literary surprise, and led the bestseller lists for the better part of two years.”

Caine was printed in runs of 50,000; it generated popular stage and film productions with Henry Fonda and Humphrey Bogart, respectively; a Time cover for Wouk; and a Pulitzer Prize. But, even with that menagerie of milestones, kindness from within the “business” did not necessarily convey to his Marjorie Morningstar manuscript. Doubleday may have professed some pre-publication enthusiasm, but Wouk’s agent declared it “an indigestible monster of overwriting,” that had to be cut by two-thirds.

But Calder Willingham, a Southern writer-acquaintance who read the novel in typescript, balked at the behind-the-scenes scuttlebutt and dispatched a 40-page letter to Wouk that sized up Marjorie: “‘If you listen to your agent and cut this book, I’ll never talk to you again.’ It was, he said, the first major novel about American Jewry.”

And so it rolled into print, sold millions of copies, and gave birth to a film starring Natalie Wood and Gene Kelly.

Wouk followed it with This Is My God — a nonfiction account of “being a traditional Jew in the modern world” — which honored the memories of his grandfather and son, and then myriad other popular, prodigious, and prestigious works such as Youngblood Hawke, Don’t Stop the Carnival, and Inside Outside.

Wouk’s The Winds of War and War and Remembrance, however, are, arguably his masterpieces. Sixteen years in the making, the novels exposed, panoramically, the horrific consequences of World War II and the Holocaust.

Sailor and Fiddler, however, is very different. It is a backward glance of a life well-proportioned by artistry and spirituality; a goodbye.

“With this book, I am free: free from contracts, from long-deferred to-do books, in short, from producing any more words. I have said my say, done my work…There remains for me only to thank my readers, of the older generation and the new ones coming along, for the chance to please…through my books.”