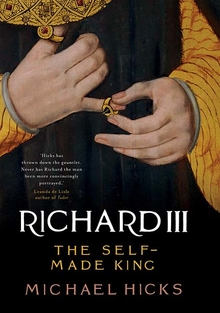 The 15th-century Richard III reigned for a mere 26 months, the last of the Yorkist dynasty. Could it be that the English monarch has dodged the slighting “transitional” status on historians’ scorecards because Shakespeare chose to write a play about him?

Shakespeare’s — and, reputedly, Ben Jonson’s — fascination with the king’s underlying story is not surprising. The received saga of Richard “Crookback” seems studded with sordid elements that cry out for staging: A devilish usurper, physically deformed and repulsive, schemes, seduces, and murders his way to the throne against all odds, only to be checked by the forces of righteous Britannic rule.

The tale had been brewing — both in Tudor-sanctioned histories and in the shared imagination of the English people — for a century, give or take, after Richard’s demise in 1485. Staging the saga, with all its scurrilous accoutrements, was likely a no-brainer for the Bard, offering the prospect of despicable onstage antics, culminating in the welcome restoration of order under the first of the Tudors. And a Tudor monarch, not uncoincidentally, was occupying the throne at the time of the production.

But what if the details of Crookback’s rise and fall are not completely accurate, perhaps shaped by subsequent Tudor propaganda? Michael Hicks, the foremost scholar of this ruler and his period, offers a balanced assessment of this question in his marvelous new biography, Richard III: The Self-Made King.

Hicks sets out to render a fair and comprehensive verdict on youngest son Richard’s unlikely rise and fall by marshaling an army of facts about the man’s life and personality — essentially every legal document, contemporary epistolary mention, scribal entry, biographical snippet or volume, and scholarly discussion ever set down and preserved.

Embark on this pilgrimage of a book only if you’re prepared to negotiate its swarming footnotes, usually four or more to the page. But if your druthers run in this groove, you will likely find joy. This scholar has created the definitive record (at least up until this moment) of Richard’s life, death, and reputation over the years.

Hicks’ subtitle reveals his own estimation of his subject: “self-made.” Here, in a nutshell, is the author’s verdict:

“Throughout his adult life, it appears, it was he who took the initiative, he who maximized his own interests, and he who pressed the limits of what was attainable and permissible. Those he interacted with, his siblings, peers, and rivals, had always responded to him, resisted him, and more often retreated and submitted. Richard was not a compromiser but a gambler, who pushed his claims to the utmost, never accepted setbacks as permanent, and counted on his opponents giving way.”

Here, Richard comes across a bit like the prototype for a self-help tome on today’s mass-market model. Even so, Hicks’ portrayal consistently draws back from both the “foul and nasty” view of Richard’s historical detractors and the undeservedly maligned victim fancied by modern-day Ricardians.

So, you may be asking, what does Hicks determine about the time-honored commonplaces of this monarch’s career? How does he adjudicate the death of Richard’s older brother and predecessor on the throne? What does he determine about the king’s intent to set aside his wife, Anne Neville, or about his involvement in the “butt of Malmsey” demise of the Princes in the Tower, or about his own bloody downfall, horseless, on Bosworth Field?

In short, he leaves it to history, reporting every detail that’s come down to us, weighing in only on what appears certain.

By the way, if it seems like we’ve been over this biographical turf in the Independent before, you’re right. You will find an earlier discussion of Richard III: England’s Most Controversial King, by Chris Skidmore, here.

Hicks’ title, while not as readable as Skidmore’s biography, deserves to supplant it as the most definitive and authoritative. This is a volume for the reference library, the product of a life of diligent study and thought.