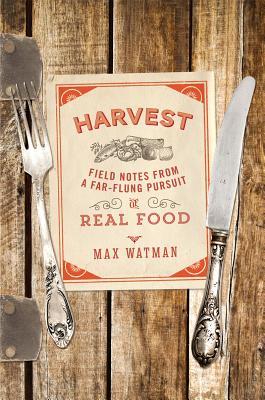 We recently bought a cow. Well, part of one. She came from a local farm to our local butcher shop where her meat was divided between several families. I made my husband handle the purchase; I wanted to stay blissfully ignorant of the process. I didn’t want to make the leap from pet to product that Max Watman so artfully describes in his book, Harvest: Field Notes From A Far-Flung Pursuit Of Real Food.

In Harvest, Watman shares his quest for locally sourced food, from salt sourced straight from the Atlantic Ocean to Yellow Tag 879, a steer Watman purchases and names Bubbles. After realizing his 0.11-acre yard is too small to raise cattle and that buying beef from the farmer’s market isn’t economical for his family, he decides to buy a steer from a farm in Virginia (Watman lives in New York’s Hudson Valley) because he wanted better beef. “I love [beef] and I don’t want it to come from a system that doesn’t care about me or the animal that is going to feed me,” he says. His plan is simple: buy a steer, let him graze for a year and then butcher him for food.

The reality of the process, however, is much more complex. Even though Watman has “a freezer brimming with beautiful meat,” he admits, “it took hustle, and it took time.” The payoff, of course, is that he knows where his meat originated and how the animal was raised: “I saw him walk the pasture, and I saw him die. I won’t have to hover above a meat case for a very long time. I’ve removed myself from one of the most violent, disgusting and disheartening processes industrial farming has delivered.”

The story of Bubbles drives the narrative of Harvest but it’s not always the focus. Watman seeks to remove the middleman between him and his family’s food source. He hunts, fishes, raises chickens, grows tomatoes, makes cheese, and even reduces seawater for salt. The narrative is circuitous at times. Watman drifts away from the story of his steer to interject other farm-to-table adventures but comes back before the reader forgets completely about Bubbles.

On the surface, Harvest is about food — where it comes from, how it gets to the table and what’s wrong with the American food system. It echoes Michael Pollan’s The Omnivore’s Dilemma and Barbara Kingsolver’s Animal, Vegetable, Miracle.

A deeper examination reveals that Harvest is also about family and friendship and the role of food in those relationships. He describes growing up in the Shenandoah Valley where his parents ran a food business. He describes his love for crab fritters and time spent on Maryland’s eastern shore. He describes the meals — elaborate dinner parties born of mutual fondness for food — he shares with his wife and their friends.

More central to the narrative is Watman’s relationship with his son, West. Watman wants to impart his knowledge of food to West and this frames many of his actions throughout the book. In one scene, Watman takes West on a “walk-and-talk” about foraging for edible plants. Even though the “walk-and-talk” is underwhelming, Watman notes that West learns an invaluable lesson: “He was seeing what he had once known in a different light.” And he developed a new appreciation for dandelions.

Watman’s tone is conversational and often humorous. It’s easy for the reader to picture herself in the narrative, to feel as if she’s walking beside Watman as he forages for dandelions with his son, hunts pheasant in North Dakota, and attempts to make hot dogs. The reader is with Watman every step of the way, including the day Bubbles becomes food.

Watman describes the process of transforming Bubbles into food matter-of-factly, but it’s not without emotion: “the first step — killing, skinning, cutting — is the biggest. It’s more of a leap than step...We have hidden the raw too well and removed ourselves from the sense that there is a state of nature at all, or that the animals that end up cooked are a part of the natural world we share with them.” For Watman, the process of transformation makes “the leap from raw to cooked, from natural to cultural, from walking to consumable … brilliantly clear. Watman leaps and lands on both feet: “This beef is victory.”

The story does not end with Bubbles, although, perhaps it should. Watman, not sure of the best way to end a book about an ongoing quest for locally sourced food, struggles through the final chapter, “A Cow is Not Always Black and White.” However, DIY foodies on a similar quest will enjoy reading Harvest despite its misguided conclusion. They might even be inspired to make their own leap from pet to product.