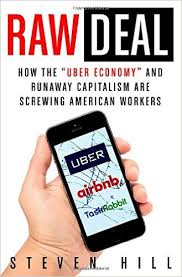 Say, you look like a bright guy. Entrepreneurial. High-energy. Not afraid of a challenge. Am I right? Bet you’d like to be your own boss, too. Work when you want, where you want. Yeah? Okay, let's turn you around and face that mirror. Guess what, friend? We’re looking at the new CEO of You, Incorporated!

Let me slide this 1099 tax form over to you and get the process started. You’ll be signing away any paid vacation time or sick leave. No guaranteed term life insurance, either. No healthcare coverage. You’ll have to cough up your own expense money. On the bright side, you won’t have to worry about figuring out the best strategy for any company 401(k) plan because you won’t have one. And best of all, you’ll be free of the shackles of anything remotely like guaranteed employment. That means you can stop working any time you want…or as soon as they stop calling because they found someone cheaper.

Hooray, you’ve just joined the estimated 45 million Americans toiling under the oxymoron “independent workers.” A growing underclass scrambling to make ends meet at the whim of increasingly picky and erratic employers, that number could balloon to 65 million within 10 years, or about half of the domestic workforce, warns Steven Hill in his troubling new book, Raw Deal: How the “Uber Economy” and Runaway Capitalism are Screwing American Workers.

Steve Fraser's recent The Age of Acquiescence also derides the false freedom this new breed of workers has been sold, but Hill does a nice job of putting it in starker, easier-to-understand ways. He's more of a storyteller. He gives us faces — not just statistics.

This brand of worker abuse cuts across industries and company size. Hill calls out Uber, AirBnb, Merck, Nissan, and dozens of others for taking advantage of perma-temps, people kept on for months and even years as full-time employees in all ways but one: They get zero benefits.

While Silicon Valley is full of "innovators,” Hill cites Merck as "a pioneer of this underhanded strategy." One example among far too many: Under pressure to cut costs, the pharmaceutical giant sold its Philadelphia factory to a company that fired all 400 employees and then rehired them as independent contractors.

The U.S. has some of the weakest protections and benefit floors for temp, freelancing, and indie workers in the developed world. South Korea, Germany, Brazil, Italy, the Czech Republic, and Japan are part of a long list of countries doing better by their workers than does The Land of the Free.

Interestingly, these other countries somehow protect this brand of beleaguered workers without crippling their economies. It would appear any corporate-American argument about needing to treat workers this way in order to remain globally competitive is flawed, to put it diplomatically.

You could call it a lie, too, if you’re in a hurry.

Hill cuts his reporting off at 326 pages, but he could easily have gone on for hundreds more with sorry examples of how millions of American workers are treated today. For instance, an October 9, 2015, article in the Huffington Post began, "Are we really so shocked that Urban Outfitters asked its salaried office workers to 'volunteer' their time on a weekend unpacking boxes in a company warehouse?"

Urban Outfitters defended the practice, saying employees were chuffed to be invited to work for free. "The dedication and commitment of [our] employees are second to none." Sure, and there was certainly no peer pressure to show enthusiasm by working for free alongside paid workers in a Pennsylvania fulfillment center to pack and ship orders. Hey, they were offered a comped lunch.

That HuffPost article’s headline summed up today's climate all too well: "How Employees Everywhere End Up Working for Free." Clearly, if Hill comes back with Rawer Deal: The Sequel, he won't have any trouble filling the pages.

Not to confuse things, but I think there's a final point we ought to acknowledge, even in passing. Life as a 1950s or 1970s salary guy wasn’t always a paradise for the Man in the Gray Flannel Suit or Joe Six-Pack running the midnight shift at the noisy Ford plant in Flint. However, at least some of those guys’ professional worries were of the more existential variety: Is this all there is? Am I wasting my life at this job? Should I have chucked it all, pulled a Gauguin, and gone to Tahiti to paint that masterpiece?

Valid questions all. Still, tens of millions of American workers today would probably love the luxury of time and a steady paycheck in order to agonize like Sartre or Don Draper. Unfortunately, they're too busy stressing out about when, or even if, today’s corporate overlords will reach down from on high and tap them for that next insecure, temporary gig.

[Editor’s note: Steven Hill will read from Raw Deal at Politics and Prose on Nov. 1, 2015. Click here for details.]

Michael Causey, past president of Washington Independent Writers, recently took a full-time salaried position after working some 13 years in the freelance wilderness. He read this book while at lunch at his job wearing new prescription eyeglasses 100-percent covered by his generous healthcare plan. He’s got a pretty good 401(k) now, too.