Levity meets the brutal reality of war in this personal account of working with wounded warriors. 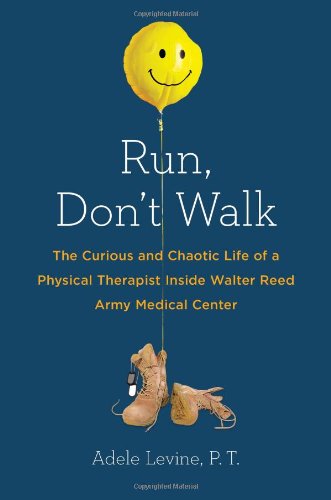 Exposés on the scandal of inadequate conditions at Walter Reed Army Medical Center became a popular topic for news sources such as the New York Times, NPR, and Washington Post, but Adele Levine, a physical therapist and comedy contributor to The Washington Post, overlooks these details in Run, Don’t Walk, her memoir chronicling her time as a physical therapist at Walter Reed from 2005 until its closure in 2011. Instead, she fills her memoir with pages of comedic accounts of her own experiences at the medical center, and that of her friends, her co-workers, and the amputee war veterans she helps recover from the physical scars of combat.

Her memoir begins with a string of anecdotes and introductions, which meld aspects of different patients into new characters to protect their anonymity. Using her experiences and the memories of her most animated patients and co-workers, Levine invites readers into this world she reluctantly joined at first, but later she felt certain it was where she belonged.

The first part of this book stumbles along with empty punch lines. The central action of these initial chapters read as if they were witnessed by an outsider, rather than confidently told by someone writing a memoir. So part of the difficulty in this section is its lack of connection. As these chapters plod along, you learn more and more about the people in the Military Advanced Training Center, the physical therapy clinic at Walter Reed, but learn little about Levine’s own story. She seems distant, and the shenanigans she reveals are less comedic because of it. Her jokes appear second-hand and lack the important details necessary for comedic effect, producing hijinx that just aren’t as funny as Levine intends.

Run, Don’t Walk does contain some funny parts, particularly ones that involve the author more directly. For example, an unexpected encounter at Home Depot causes Levine to shoplift an accent rug. Yet her description of clowns visiting the vets, which could have been mined for comedy gold, falls flat.

The book does get better in the second half, where the stories become more serious by retelling the pain of combat, post-traumatic stress disorder, and war’s effect on a patient’s recovery. Like the patients she works with, Run, Don’t Walk becomes a bit more sure-footed and consistent as Levine discovers the rhythm of the story she wants to tell.

The truest statement of the book comes from the author’s take on why she can’t emotionally relate to her patients. As she laments her inability to be a shoulder to cry on, she explains her own frustrating lack of empathy: “This, more than anything, bothered me about myself. I could never give emotional guidance. I was too blunt. Too rigid. Too singularly focused. The only thing I could offer you was consistency. No matter what was going on with you, I would be there to give you a hard time about why you were late.” In part, I think this admission appropriately self-identifies why the book doesn’t fully connect with the reader. The memoir never fully captures the weight or irony of these lost soldiers, who were once at the peak of physical prowess but now need to be rebuilt both physically and mentally.

The memoir is strongest when reminding readers of the vets’ struggles throughout their service, their injury, and their sacrifice. These facts can’t be avoided because this isn’t a memoir about a plucky, suburban outpatient physical therapy team working with sprained ankles from tennis injuries, but about Walter Reed Army Medical Center, a place with a rich history of treating our country’s soldiers, war-wounded, and even presidents.

Run, Don’t Walk also depicts some touching moments regarding the patients, especially Levine’s initial encounters with Cosmo, whose recovery spans the entire book. When Cosmo escapes from the hospital to take a day-trip by bus through the city, Levine importantly points out how people often lack reverence for war heroes and instead take them for granted: “Even though Walter Reed was processing almost all of the American casualties out of Afghanistan and Iraq, most of Washington, D.C., had never seen a recently wounded veteran. The wounded and injured, the recently disabled, hung out behind the gates of Walter Reed, waiting to get better. Waiting to return to their former lives in small-town mid-America somewhere. I’m sure no one on that bus even remembered there was a war going on, until they came face to face with Cosmo.”

Through stories about vets like Cosmo and a young man who witnessed the loss of his friend after an improvised explosive device went off in their vehicle, readers see flourishes of vivid realism, which, in part, make Run, Don’t Walk so important. This book, however, lacks details, which causes it to lose the full impact it could have. This lack of detail suggests that the writer isn’t as intimate a narrator as necessary to tell these stories, which is a tricky supposition in the context of a non-fiction memoir. This book also fails to accomplish a sense of intimacy between readers and the lives of Levine and her patients. The majority of the time, readers feel like the parade of hospital visitors, who only observe the patients from behind the clinic’s aquarium-like glass, only to move on after a few waves, salutes, and supportive nods. They don’t get the chance to fully understand what goes on in Walter Reed, which will leave many readers wanting to know more — more about Levine, more about her patients, and more of the funnier aspects of her experiences.

Justin C. Young, M.D., is a physician from Atlanta, GA, and now living in Los Angeles, CA. When he is not working with patients, he is traveling the world, training for triathlons, and has a passion for movies and screenwriting. He grew up reading science fiction but also enjoys political nonfiction, thrillers, and good dialogue.