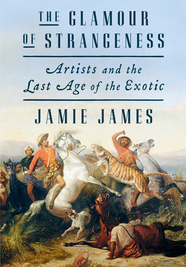 The title of Jamie James’ The Glamour of Strangeness comes from a quote by that most famous of European adventurers, T. E. Lawrence. In his timeless Seven Pillars of Wisdom, he writes: “Pray God that men reading the story will not, for the love of the glamour of strangeness, go out and prostitute themselves and their talents in serving another race.”

He goes on to describe that fully adopting Arab ways and thought “quitted me of my English self and let me look at the West and its conventions with new eyes: they destroyed it all for me.”

Unlike Lawrence, the subjects of James’ survey of exoticism were not in danger of losing themselves in service to another nation or people; each was capable of shedding the trappings of his or her constituent nationality without external pressure and for purely personal reasons.

With the exception of Paul Gauguin, none of the artists and writers profiled here are household names, but all took a similar route into the unfamiliar. The other 19th- and 20th-century subjects include Walter Spies, a German artist raised in Russia who made his permanent home in Bali; Raden Saleh, a Javanese painter who came into his own as an artist during 20 years in Europe; a Breton doctor and writer, Victor Segalen, who loved China best and coined the term “exotes,” which James adopts to describe “travelers who seek to immerse themselves in otherness”; a Swiss-born writer, Isabelle Eberhardt, whose adopted locale was the Maghrib in North Africa; and film-maker/writer Maya Deren, born in Russia and raised in the U.S., whose heart was fully in Haiti.

Early on, James makes the distinction between a tourist, one who passes through a place to collect experiences, and a traveler, one who is genuinely interested in and open to the culture, the people, the geography, the history of a place.

He describes his work as “a critical survey of the manifestation of the impulse to acquire a new culture,” and his unifying theme is to consider subjects who were searching for a place that would become the home they never had. For his subjects, “home” was a place that they chose.

These artists were, to some degree, also escaping the strictures of their own cultures. Not surprisingly, for the European/American expatriates, the desire to slip the shackles of conventional sexual mores was one strong draw of an exotic, unconventional life. The women in particular found freedom in their adopted lands that was not otherwise available to them. The French expression is “le decivilise”; the American expression is “going native.”

Gauguin is something of the odd man out here. While it’s true that he was actively trying to cultivate a style uniquely his own and had long considered the concept of a “Studio of the Tropics,” his move to Tahiti was almost a PR stunt, calculated to draw headlines and make more money than he could in Paris.

He and his Symbolist friends held a series of fundraisers to allow him to decamp to a place where he could, as he described, “cultivate in myself a state of primitiveness and savagery.” That he chose a locale known for free love was no accident, but the long line of syphilitic sailors who had visited ahead of him took the bloom off that paradisiacal rose. Nonetheless, Gauguin achieved all that he set out to do, and he never looked back, eventually losing some of that patronizing sense of Tahiti’s “savagery.”

In contrast to Gauguin, who made a lasting impression on the European art world but left virtually no mark on his adopted homeland (beyond the children he fathered), Walter Spies is a cultural icon in Bali and virtually forgotten elsewhere. His work as a musician and painter is almost entirely lost, but he influenced the Balinese art that came after him.

It seems obvious that it was Spies’ story that initially captured the author’s imagination in undertaking this project. Certainly, Spies offers the best example of an artist who, in search of a true home, jettisons “manufactured wants” to fully embrace and live within a new culture without condescension, and contribute to that culture as a full participant.

While the profiles are interesting in themselves, and perhaps introduce readers to artists and writers they aren’t already familiar with, the collection never becomes more than exactly that: a collection of profiles.

To a modern audience, probably the most compelling elements of Glamour are those describing James’ own experiences as a traveler. A professional travel writer, he has visited some of the wildest, most remote locales on earth. Nonetheless, his own shock of exoticism comes when the English-speaking head waiter at Cambodia’s Grand Hotel d’Angkor, on being tipped with American dollar bills, says of George Washington, “This is your king? He looks like a lady.”

According to James, Walter Spies can be credited with unintentionally starting the tourism industry in Bali, “something he came to regret bitterly by the end of his life.” James wrote much of this book from Bali, as he watched the landscape around his apartment change from rural cattle pasture and rice fields to neon billboards, nightclubs, and luxury hotels — a transformation that illustrates what makes the words “tourist” and “tourism” epithets. By the same token, though, the Balinese see these changes as “a proof that their country is becoming modern and cosmopolitan.”

James also drives home the point that nowhere on earth is truly out of reach anymore — no Forbidden Cities, no culture or geography that isn’t accessible through a Google search, no location that your eyes cannot have beheld until the moment you are standing there. To think of places that way, though, considers the world through the eyes of a tourist rather than a traveler. Seeing a place is nothing like knowing a place. It’s nothing like being home.

Jennifer Bort Yacovissi’s debut novel, Up the Hill to Home, tells the story of four generations of a family in Washington, DC, between the Civil War and the Great Depression. Jenny is a member of PEN/America and the National Book Critics’ Circle, and reviews regularly for both the Independent and the Historical Novels Review of the Historical Novel Society. She is serving as chair of the 2017 and 2018 Books Alive! Washington Writers Conference and is president of the Annapolis chapter of the Maryland Writers’ Association.