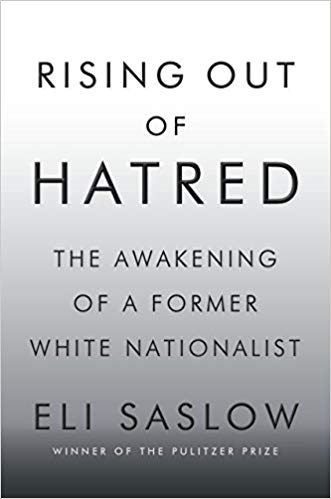 The cover of Rising out of Hatred: The Awakening of a Former White Nationalist grabs your attention, and the not-so-subtle design suggests the message within: HATRED jumps out in bold black letters from a parchment cover that starts with white at the top, seeps into grey, and, at the bottom, melds into a dark ash, an achromatic color that means a “color without color.”

The schematic design seems to be a metaphor for the gradual conversion of a white supremacist to multicultural humanity where the color of a person’s skin no longer determines acceptance.

Within the body of the book, Eli Saslow, a Pulitzer Prize-winning journalist for the Washington Post, guides readers through Derek Black’s journey as the leading trumpeter for white nationalism to finally renouncing his place in that orchestra of hatred.

An only child homeschooled by white supremacist parents, Derek’s bedroom was festooned with Confederate flags. His godfather and mentor was David Duke, a former member of the American Nazi party, who describes African Americans as “basically primitive animals” and taught young Derek that “our clear goal must be the advancement of the white race and separation of the white and black races. This goal must include freeing of the American media and government from subservient Jewish interests.”

An avid student, Derek absorbed every word. As a child, he designed a website for children featuring racist games and anti-Semitic songs that attracted more than 1 million visitors. Later, he launched a 24-hour online radio network and hosted a weekday show with his father, Don, a former Ku Klux Klan grand wizard and founder of Stormfront, the first hate website, that claimed more than 300,000 registered members by 2015, most of whom supported Donald Trump for president.

On their daily radio shows, Derek and his father advocated for interests from a whites-only country to skinheads and neo-Nazis. Four days after Barack Obama was elected president, Derek, then 19, announced to his listeners: “We can take the country back. The great intellectual move to save white people started today.”

Given his full commitment to white supremacy and Holocaust denial, plus his natural ability to communicate at white supremacist conferences, especially by singing songs while playing his guitar (he once entertained fellow extremists by performing the 1972 song, “The Monkey that Became President”), Derek was considered a prodigy and was pushed by his father and his godfather to be their heir apparent.

Then Derek entered the New College of Florida, a liberal-arts honors college in Sarasota, where he befriended a dark-skinned Peruvian and dated a Jewish girl. He continued doing his daily radio shows with his father, but from a secret place off campus, never mentioning his life as a white supremacist to anyone at school. Soon, though, he was exposed by a student, who posted Derek’s racist articles and anti-Semitic radio shows on the school forum, sparking a campus-wide controversy.

Most students shunned him, flipping him off publicly, and some even dropped classes he attended. The exceptions were two Jewish male students, who invited him to Shabbat dinners on Friday nights in hopes of enlarging his world vision.

Here enters the heroine of the story — Allison Gornik, who also attended those dinners but tried to avoid talking to Derek because he represented everything she opposed. Over time, though, they developed a relationship and, with spectacular patience on her part, plus saintly compassion, she managed to lead him from darkness to light, to recognize the wrongs he’d committed and the need to try to set them right.

At her urging, he eventually emailed an open letter to the Southern Poverty Law Center, a civil-rights group that battles racism and hate groups. He admitted that his past actions had been “harmful to people of color, people of Jewish descent.” He disavowed white nationalism and promised never to participate in any form of discrimination in the future. With that letter, he broke with his family and tried to put distance between his past and his future by changing his name.

There is no happily-ever-after ending to this story, as the rise of white nationalism seems to be firmly established in the White House, where Donald Trump advocates a border wall harking back to the Klan Border Watch that David Duke suggested in 1977.

That same xenophobia and racism are surging throughout Europe in Hungary, Poland, France, Germany, and Scandinavia, which makes Allison Gornik the only bright light in Saslow’s dark story. She proves that one principled person can make a difference in depriving hatred its abhorrent advance.

She represents the audacity of hope, that “thing with feathers that perches in the soul” and, according to the Belle of Amherst, “sings the tune without the words and never stops at all.”