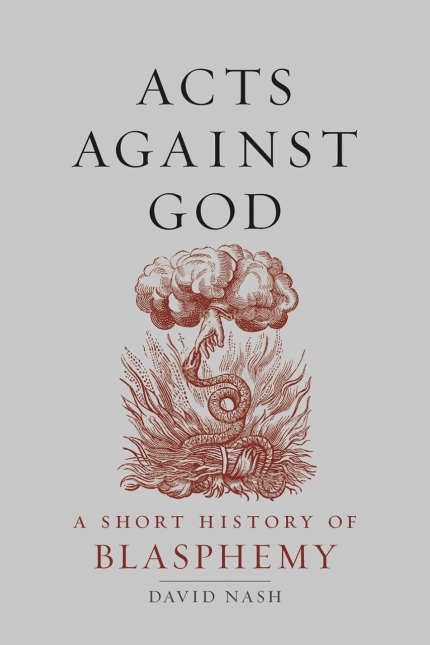 If you’re thinking of snuggling up with David Nash’s Acts Against God: A Short History of Blasphemy during quarantine, you’re probably craving harrowing stories of heretics escaping  the Inquisition and inspiring tales about risks run by religious radicals in service of reason and enlightenment. Or, perhaps, just descriptions of medieval torture methods to foist upon others stuck in the house with you.

Nash’s book does, in fact, include all of these things. Unfortunately, several other inclusions mar Acts Against God badly enough that no reaction from a disgusted roommate or relative is likely to make it worth your while. Nash’s disdain for authority, for instance, tires more than it entertains. He writes:

“Perhaps the central organizing principle of early modern society was the idea of authority. Wherever ideas, events or even personalities needed explaining it was necessary that an authority do so. This meant forms of authority were everywhere asserting, and even imposing, their explanations upon the world.”

True enough. The question, of course, is what age of the world or what angelic beings Nash has in mind that could possibly dispense with authorities. Anarchists might respond, now and us — but they, too, come in for criticism in Nash’s book (he writes that they see “the use of dynamite as a panacea for the ills of society”).

Perhaps a radical live-and-let-live liberalism (or libertarianism) could come close enough, and as the book goes on, it becomes clear that this is indeed Nash’s position.

Acts Against God also includes scores of mixed metaphors, awkward phrases, and incorrect prepositions that tarnish the reading experience. Occasionally, a construction is so odd that a reader may sit back in her chair and wonder what the author means. All of this is regrettably fixable; a little polishing by a good copyeditor could have improved the prose considerably.

Further, the attentive reader may be disquieted by several confusing, highly misleading, or simply false historical claims made in the early chapters of the book. When Nash writes that Anaxagoras’ impeachment in Athens in the 430s BCE “certainly seems like the first attempt of a state to intrude on the opinion of an individual,” one wonders how he came by the knowledge that such intrusions did not occur in previous ages. Additionally, the story of the Athenian accusation of impiety against Alcibiades unfolds without mention of his reckless political maneuverings beforehand or his defection to Sparta afterward.

Most scholars of the Koran are said to believe that blasphemy “does not demand the harshest penalties” since it is “a road to apostasy rather than being a danger in itself,” but Nash himself tells us that blasphemy is still a capital crime in Pakistan today.

What Acts Against God leaves out of its narrative is equally perplexing. For example, one waits in vain for the story of Galileo — a narrative that, as it involves both heresy and blasphemy, seems a likely candidate for such a book.

Perhaps even more bewildering is the exclusion of the trial and burning of Italian philosopher Giordano Bruno — possibly the most famous auto-da-fé involving an intellectual figure in European history. Bruno is never even mentioned in Acts Against God.

Nash focuses on Britain rather than the Continent, and several fascinating episodes do shed light on the intertwined histories of British religion and social control. These include the compelling story of James Nayler, a Quaker who, rumor had it, claimed to be Jesus Christ himself. Before the House of Commons in December 1656, writes Nash:

“Nayler admitted his actions and confirmed his identification with Christ — clarifying that this was only in as much as Christ was within him (again a standard Quaker pronouncement) and that he did not assent to being worshipped.”

The author relates several other strange tales, all of which are instructive for any reader interested in the antinomian and radical Protestant movements that played such an outsized role in the English Civil War. But when he comes to the story of Thomas Aikenhead, an impoverished Edinburgh medical student in the 1690s, the reader may be shocked to discover that Aikenhead was “the only man in the British Isles known to have been executed for the specific crime of blasphemy.”

The father hoping to entertain or terrorize his quarantined teenagers with descriptions of how the rack functioned and the sorts of blasphemers who were drawn and quartered will find himself disappointed and wishing he’d checked the index for Bruno first.

The final chapters of Acts Against God address modern and contemporary incidents in Britain and Ireland involving blasphemy, and the reason why Nash has sprinted through his history of the topic finally becomes clear. Apparently, he is less interested in the actual backstory of blasphemy than in its possible uses in the world today.

Above all, blasphemy functions for Nash as a tool to enable and ensure free speech, and free speech is the cornerstone of all other individual freedoms. This seems to include even hate-crime legislation.

Such laws pose a threat for Nash and his compatriots because “a hatred of beliefs…is a lawful position, but incitement laws — and those that administer them — cannot always discern where the line gets crossed into a hatred not of beliefs, but of believers.” Though Nash’s thoughts on this count are not entirely clear, it is obvious that current debates about the implementation of this type of legislation were part of his motivation for writing the book.

Those who doubt that liberalism (the political theory, that is) provides the resources to solve the social problems of our day will be bored by Nash’s utopian anti-politics; those just looking for an engaging quarantine read will be disappointed by his missteps and omissions. In addition, many may simply find the resistance to hate-crime legislation in Acts Against God to be appalling.

Joel Looper has a Ph.D. in divinity from the University of Aberdeen, U.K. He lives and writes in Waco, TX.

The Narrow Door: A Memoir of Friendship

A bittersweet look at the bonds shared — and shaken — by kindred spirits.