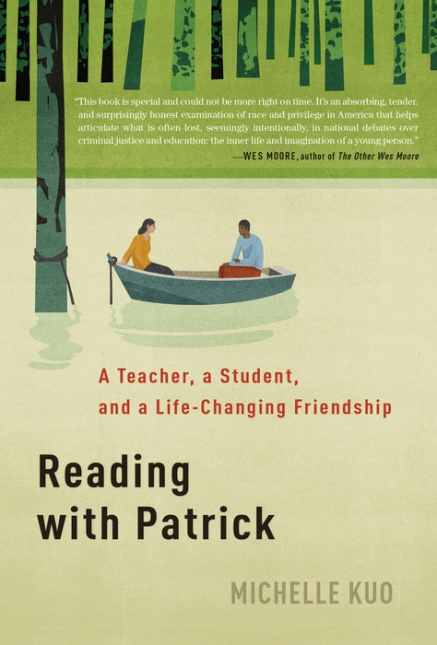 One of the many ways teachers have no chance in this world is that when we make heroes of them, they become caricatures. I think of Mr. Chips and Stoner, as well as John Keating, the Captain of Captains in “Dead Poet’s Society.” There is no way to encapsulate the entirety of what a teacher does.

Too young to know better, and true to her determined nature, Michelle Kuo has attempted to remedy this difficulty by casting herself as the hero in Reading with Patrick. To hear her tell it, she should have been something else. She should have just continued the narrow course her overbearing Chinese-American parents set for her: Harvard Law, high-powered corporate practice, and more money than dreams.

But, as a Chinese-American (she is unclear about how much Chinese she can speak and understand) herself, she felt alienated from the careers and lifestyles that her peers were gleefully adopting. So she joined Teach for America after she graduated from college, and was assigned to a school for last-chance kids, ironically called "Stars," in Helena, Arkansas, population 11,000, on the Mississippi River about 60 miles south of Memphis.

Her idealistic side enjoys the challenges, poverty, ignorance, dead-end lives all around. But her practical side called it a lost cause and a waste of time. She introduces various students, including Patrick, and their miserable stories, and her intentions and attempts to raise them up. The chapters are structured by the books she assigned and the lessons they all, including the teacher/author, learned.

Of course, education is really about socialization, helping people relate to each other in a productive social fabric. So Kuo delves a bit into the history and social structures of the Mississippi Delta. She demonstrates that her colleagues are equal parts idealist and fatalist.

She goes to Patrick’s squalid house to cajole him into returning to school when he becomes truant. But we’re never allowed to forget that this is Kuo’s story. She can’t stop asking herself why she’s down there. It’s love-hate. And actually, after the two years of Teach for America are done, she leaves for that Harvard Law thing that was always expected of her.

She is never so idealistic about the law. It’s a grind, but she studies it so she can affect change for the disadvantaged in society. She never uses the word, but there are various expressions of guilt throughout the book. For example, in the introduction, Kuo says that taking futile work in the Delta would “help acquit me of [James] Baldwin’s charge” of innocent ignorance of racial reality in the U.S. This guilt undermines her authenticity, even to herself.

Once through law school, she settles in San Francisco, only to find herself beckoned back to the Delta. Spoiler alert: Patrick commits a murder and is sent to prison. He needs representation, but more importantly, he needs a social lifeline.

Kuo, in a matter of weeks, puts her life on hold and goes back to Helena to help Patrick endure his confinement. “A voice inside said, If you hadn’t left, Patrick might not have ended up in prison. You owe him something. Stay here. Drop everything and stay a little while.”

She had already written a piece in the New York Times about Patrick, so when she asks her new boss if she could postpone her work, she says, “I need to see Patrick’s case through. I need enough time to run through his options with him. And I just feel like I’ve been running away from the Delta and have unfinished business there.”

A page later, she says, by moving back to the Delta permanently (which she also dismisses), “I’d be moral and authentic…like Tolstoy’s hero Levin.”

She’s young, she doesn’t know what her authentic self is, but she’s going to discover some very important things about teaching in her final chapters, which are narrowly focused on her work with Patrick, who resides in the county jail. This selfless-monomania-inspired-by-guilt becomes the purpose of her life, and this quality is probably what got the book published.

Who gives up everything to help one guy in jail to read?

The perceptive reader doesn’t have to work very hard to see that her absolute control over Patrick’s education forms the young man in exactly the introspective way she prefers. He’s a captive audience; he learns to like poetry. Kuo learns how both she and Patrick have been in need of authentic selves.

Again, in relation to Baldwin, she says, “It took work to build an inner warmth toward yourself…” Of course there was racial inequality, “But the harder task was to figure out who one was because and in spite of it.”

This is lovely. And it appears that this realization is what freed Kuo from the drudgery of law work for the rest of her life. Now she’s an author and teacher of race, law, and society at the American University in Paris. Why not let her have the last word on teachers?

“The idea that you can change somebody’s life for the better is powerful…I know what I’m doing: wishful thinking, crazy thinking. I know that maybe nothing would be different if I had stayed, that Patrick might have kept living his life and I mine. And I know it sounds as if I think I could have saved him, as if I think I’m so important to his life. It’s not like that. Or maybe it is.”

A Life Everlasting: The Extraordinary Story of One Boy’s Gift to Medical Science

This earnest narrative about a mother’s greatest loss blends memoir and investigative journalism.