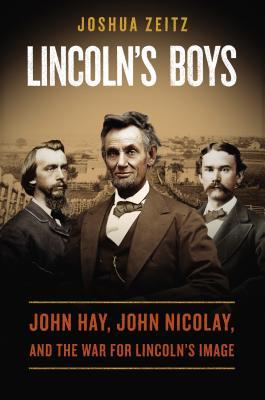 Joshua Zeitz has written a lively and readable book about John Nicolay and John Hay, who served Lincoln as private secretaries in the 1860s, and then in 1880s wrote a 10-volume life of Lincoln. Unfortunately, Zeitz has not given us a very original book.

Part of Zeitz’s problem is that he is following in the footsteps of John Taliaferro, whose fine biography of John Hay appeared in May of 2013. There is little in Zeitz’s book about Hay that is not also in Taliaferro’s book. Indeed, Zeitz does not even mention Hay’s love affairs with Nannie Lodge and Lizzie Cameron, which formed such a fascinating part of Hay’s later life.

With respect to Nicolay, there was much more running room for Zeitz, for there has not been a biography of Nicolay since his daughter Helen’s book, published in 1949. Zeitz, however, spends far more time with Hay than with Nicolay. From 1872 through 1887, for example, John Nicolay was the marshal of the United States Supreme Court. “With relatively easy duties when the court was in session, and virtually none when it was not, the post came with a comfortable salary, a plum office in the U.S. Capitol, and renewed proximity to Washington’s power center.” Surely, during these 15 years, Nicolay met some interesting lawyers and judges, was at least a spectator in some interesting legal cases. But we learn nothing of this from Zeitz.

Zeitz is especially interested in Hay and Nicolay’s 10-volume biography of Lincoln. And it is a fascinating story, how they secured exclusive rights to Lincoln’s papers from his son Robert Todd Lincoln, how they struggled to turn these papers, and a mass of other materials, into a massive book, more a history of the Civil War years from a Northern perspective than a life of the man. As the subtitle suggests, Zeitz argues that Hay and Nicolay established Lincoln’s image through their joint book in a way that continues to affect our views.

According to Zeitz, “Hay and Nicolay helped invent the Lincoln we know today: the Great Emancipator; the sage father figure; the military genius; the greatest American orator; the brilliant political tactician; the master of the fractious cabinet who forged a ‘team of rivals’ out of erstwhile challengers for the throne; the Lincoln Memorial Lincoln.” (punctuation added)

To make this argument, Zeitz quotes some of the unflattering estimates of Lincoln that were prevalent during the Civil War. But was not Lincoln already, by the time Hay and Nicolay wrote in the 1880s, famed as the Great Emancipator? Francis Carpenter had already, through his famous painting of Lincoln and his cabinet, debating the draft proclamation, made the argument that the greatest act of Lincoln’s administration was his emancipation proclamation. And was not Lincoln already viewed as a father figure? Thousands of Civil War soldiers had referred to him, even before his death, as Father Abraham.

Zeitz’s discussion of Nicolay and Hay’s 10 volumes often echoes a 1998 article on the same subject by Michael Burlingame. For example, Burlingame wrote that, “at one point, Lincoln virtually disappears from view for 395 pages as the authors give what their editor, Richard Watson Gilder, called ‘the secret history of the secession conspiracy.’” Zeitz writes that this was “a biography whose subject all but disappeared for an entire volume.” Chapter 16 of Zeitz’s book opens with a few pages about the reaction to Nicolay and Hay’s book as it appeared in serial form in Century Magazine. The footnote for these pages does not cite any contemporary sources; the only cite is to Burlingame’s 1998 article.

Let me return to my first point: This is a pleasant book, a good introduction to the subject for the average reader, but not, I fear, a real advance in our understanding of the two secretaries or their joint life of Lincoln.

Walter Stahr is a lawyer and the author of biographies of John Jay and William Henry Seward. He is now at work on a biography of Edwin Stanton.

Riding to Arms: A History of Horsemanship and Mounted Warfare

An homage to the mighty steed and the works inspired by it.

A gripping portrait of D.C.'s coming of age during the Civil War, and the paroxysms the city endured to take its place on the world stage.