Prize for the Fire: A Novel

A religious martyr embraces her truth in tumultuous Reformation England. 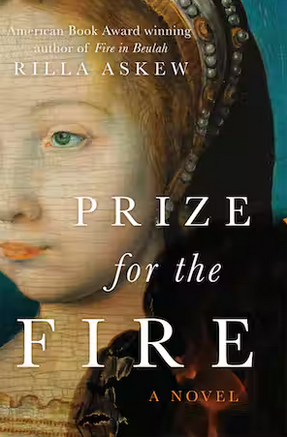 Rilla Askew’s Prize for the Fire is a riveting account of the final decade in the life of Anne Askew (no apparent relation to the author), a fiercely independent Englishwoman burned at the stake in 1546 for espousing her Protestant faith at a time when doing so was considered heresy.

Anne evolves from a to-the-manor-born teen immersed in self-doubt to an articulate 25-year-old “gospelist” whose fervent faith compels her to speak out no matter the cost. As a sign of the divided times, her “reckless tongue” unnerves Henry VIII and his inner circle even as his Protestant queen and her ladies sneak Anne into their inner circle to soak up her Bible-based wisdom.

Prize for the Fire opens in the winter of 1537, just after Anne’s marriage to the pious, abusive Thomas Kyme, “a grasping man with fair hair…ruddy face, pale eyes” who “keeps his gloved hand on his wife’s neck.” In contrast, Anne, the daughter of a gentleman, is “lonely, forlorn, resentful, as furious and full of self-pity as any girl forced to marry against her free will or consent might be.”

While she enters the marriage as a replacement for her betrothed sister, Maddie, who has died, Anne views it more like penance for her recent taunting of a mob that threatened her family. The rebellious act led to the capture — and holding for a fortnight — of not just her father and older brother but her very young brother, too.

Unfortunately, speaking out against her brutish husband wins Anne only harsh reprimands from all corners, more thrashings from Kyme, and separation from her children. The author’s frequent use of first-person narration thrusts us into Anne’s stark reality:

“I dismounted, stood waiting. They stared at my face in silence. I’ve not seen a glass, but I know what I look like. My fourth beating in three months. Not the worst but I pray God it is the last.”

Central to Anne’s story is her relationship with Scripture. A Bible she finds hidden in Maddie’s belongings becomes her most treasured possession until her husband destroys it. At this point, she begins walking a mile to church, where she reads the Bible aloud (an illegal act for women) to gathered crowds. These readings prompt her to challenge the fundamental tenets of Catholicism. Strikingly, she comes to reject transubstantiation: the tenet that declares the bread and wine of the Eucharist, once consecrated, become the literal body and blood of Christ. Instead, she promulgates the Reformist view that they merely symbolize Jesus’ body and blood.

The vicissitudes of Anne’s life mirror the times. When Henry VIII becomes head of the Church of England in 1534, he leaves Catholic doctrine intact. But with the first printing of a complete English-language Bible in 1535, violent uprisings commence — starting in Anne’s own hometown of Lincolnshire — as reformers begin to reinterpret Catholic teachings, and conservative factions at court push back. Official tolerance of religious reform ceases with Henry’s Six Articles in 1539, decreeing, inter alia, death for those heretics who repudiate transubstantiation. Anne’s fate is sealed.

In her last two years, 1544-46, she lives just above starvation level in London with her devoted maid, Beatrice. Anne’s siblings — who once struggled to protect her — can (or will) no longer shield her from the fallout of her actions, including her unwillingness to obey her husband. No matter. Anne herself shines in “kindred soul-ship” with fellow reformers during clandestine midnight meetings and in the private spaces of Hampton Court, where she shares her prodigious biblical knowledge with Queen Katheryn Parr.

In the novel’s final heartrending chapters, author Askew’s nuanced point-of-view shifts bear gentle yet clear-eyed witness to Anne’s gruesome last days. She stays brave and loyal to the end, not divulging a single name of fellow reformists or any of the queen’s ladies, even under torture.

Henry VIII is never personally depicted, but his hand in Anne’s execution looms large. As the author implies, while the king and Anne probably never met, he “hated Anne’s perfect faith, hated all he had been told of the grace of her dying.” In contrast, “Anne Askew believed, as all England believed, that the Almighty had bequeathed unto Henry the power to reign…that the king’s will and the Lord’s…were one and the same. In her young years she believed this. She did not die believing it.” Rather, she went to the flames believing in her cause — and herself.

With a B.A. from Colgate University, an M.A. from Georgetown University, both in Russian area studies, and a UCLA certificate in fiction writing, Anne Eliot Feldman has worked at the Library of Congress and in the defense industry. She’s writing a novel about the heart-stopping fragility of cacao beans and true love.

A bad-girl barrister tries to find justice before it’s too late in this formulaic thriller.