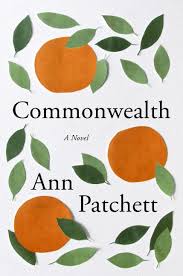 In her fiction, Ann Patchett’s typical launch point is to take an odd collection of people, throw them together in unfamiliar territory, and see what happens. Readers of her autobiographical essays may understand the origin of that impulse given the circumstances of her early years, when she found herself thrown into just such a situation with the unexpected arrival of four stepsiblings, a step-parent, and a new home on the other side of the country.

On diving into Patchett’s latest novel, Commonwealth, readers familiar with her backstory may feel a frisson of having been let in on a secret: This book is grounded in autobiography. Not knowing that will in no way diminish its joys, but understanding the parallels to Patchett’s own story lends an additional dimension, a layering of real and imagined that adds weight and depth to an already strong and lovely story.

The book starts with a significant understatement: “The christening party took a turn when Albert Cousins arrived with gin.” Bert Cousins of the Los Angeles District Attorney’s office crashes the party that cop Fix Keating and his beautiful wife, Beverly, are throwing to celebrate the baptism of their younger daughter, Franny. Bert, who uses the party to escape a house containing his wife, Teresa, and their 3.5 children, decides in the moment he sees her that Beverly will be his. A kiss given and returned in the midst of the celebration changes all parties’ lives irrevocably.

(As an aside, the first chapter of Commonwealth should be required reading for writers who want to understand how to set up an entire novel in just a few pages.)

Franny, though not a writer, is Patchett’s alter ego: second daughter to a cop and his beautiful wife, dutiful Catholic schoolgirl, and daddy’s girl, who one day finds herself swept across the country with her sister, mother, and new stepfather, and possessed of a troop of stepsiblings who move in for three months every summer.

The experience is painful and bewildering for all the children. They are left to their own devices to wrestle through a situation thrust upon them by self-absorbed adults who are wholly unequal to dealing with the chaos they’ve created. We’ve already observed Bert’s avoidance-based approach to fatherhood. Beverly’s combined unwillingness and inability to rise to the occasion is a disappointment to everyone. The wronged parties left back in L.A., Teresa and Fix, are rendered impotent by distance and their own bewilderment.

Cal, Holly, Jeanette, Albie. Caroline, Franny. Kids wise enough not to hate each other, but still kids — which means partially socialized, lacking impulse control, and fuzzy on concepts of cause and effect — they are in no way ready to look out for their own or each other’s preservation. When tragedy finally strikes, what’s most amazing is that it doesn’t happen sooner.

Years on, a twentysomething Franny, whose future has been mapped out by everyone except her, meets Leo Posen, a washed-up alcoholic author whose transcendent works of fiction are behind him. Because he listens to her — truly listens in a way that no one else ever has — Franny tells him the full story of her family. After changing a few minor details, Posen appropriates it as his own and sells it as fiction, a novel called Commonwealth, which reanimates his mordant career.

Franny understands how she’s betrayed her siblings. “[S]he knew exactly what it was she’d done, how serious and wrong it was to have given away what didn’t belong to her.” Here’s where that meta-level kicks in: Knowing some of Patchett’s own history makes a reader realize that there’s another dimension to consider.

If the question is, “How far from truth must a writer go to get to fiction?” or “Whose story is it to tell?” one can only presume that the author has gotten family dispensation, or perhaps forgiveness, for writing Commonwealth.

Patchett takes an oblique approach to telling the story, starting from the almost-beginning and moving immediately to the almost-ending, and then circling in tighter, drawing ever closer to its heart. Her sharply observed narrative makes the novel laugh-out-loud funny at the same time that it is heartbreaking, maddening, and irresistible.

There is a decidedly different tone and feel to this novel compared to her earlier ones. Patchett is typically pretty tough on her characters; she does not coddle them, much like a grammar-school nun who won’t put up with nonsense and doesn’t want to hear a lot of whining. Here, Patchett is much more tender, as one might expect under the circumstances. These are, after all — after everything — people she loves dearly, and she has shown us why.

Now Is Not the Time to Panic: A Novel

Teens’ shake-up of their small town has lifelong repercussions.