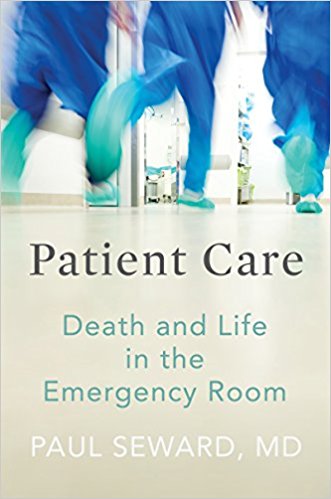 Paul Seward’s half-century in the emergency room has yielded a bounty of stories illustrating the joys and frustrations of his trade. The 21 friendly, well-carved vignettes he shares in Patient Care penetrate the mysteries of emergency medicine while underscoring the compassion, skill, and dedication of the modest practitioner/author.

One of the recurrent concerns expressed by Seward is his inability, when sharing his reminiscences here, to remember everything relevant to a particular patient’s case and to his own behavior during the crisis. He fills in these blanks by explaining what his customary action would likely have been.

Why does he take the time to worry about these memory lapses? Perhaps it is one way of admitting the human fallibility to which physicians, like all people, are prone. And while he often puts his colleagues on a pedestal, he keeps himself on the ground.

Seward reveals that he has always taken great personal interest in the people and situations he has encountered. While emergency medicine is characterized by its dependence on tried-and-true routines, it’s important to recognize when a situation is going off the rails — and to be able to improvise or ask for help.

It’s a highly pressurized workplace in which minutes, even seconds, can mean the difference between life and death. Seward emphasizes this reality over and over. And he makes the stakes feel real for readers.

One of his patients in the ER was a middle-aged man sitting stiffly in a wheelchair, a pair of shears sticking out of his back. The man looked like “some kind of grisly windup toy with a key in the back of his neck shaped like the handle of a pair of shears.”

The man was a professional gardener attacked by a co-worker; the shears’ blades had entered “exactly in the midpoint of his neck, halfway from his shoulders to the back of his neck.” They stopped just short of the spinal cord.

The description of the neurosurgeon removing the weapon, with exquisite care, is charged with suspense, but the real miracle was the amazingly lucky placement of the shears. The man just needed to have the wound flushed and closed.

In another story, Seward begins by offering a detailed exposition of the heart as a unique muscle designed to rhythmically contract its four chambers to force the movement of blood. He then recounts the far-reaching cardiac damage suffered by a particular patient in his fifties, and the extreme measures taken to keep the man alive. While the individual ultimately dies, the skill and compassion shown to him by his medical team is uplifting.

Several episodes in Patient Care capture the enormous amount of energy expended by ER personnel. For example, something as seemingly routine as the insertion of a Foley catheter is, in actuality, a complex process requiring many steps. It can also be dangerous — for the staff, that is.

Seward recalls once catheterizing a comatose patient, only to have the man momentarily awaken and punch Seward in the face before again falling unconscious:

“I stood there, not knowing how to respond. Then, still with his penis in one hand and the Foley in the other, I turned and looked at the nurse. She had been standing just beyond the next bed and had seen the whole thing. I think it was all she could do to keep from falling on the floor with laughter.”

Whether describing the obstinacy of patients, the brave faces worn by worried relatives, the technical aspects of repairing injured bodies, or the elation of helping potential catastrophes end well, Paul Seward fills his attractively written narrative with authoritative detail, strong emotion, and a precise sense of place.