The Civil War roots of modern photography and the mass appeal of images. 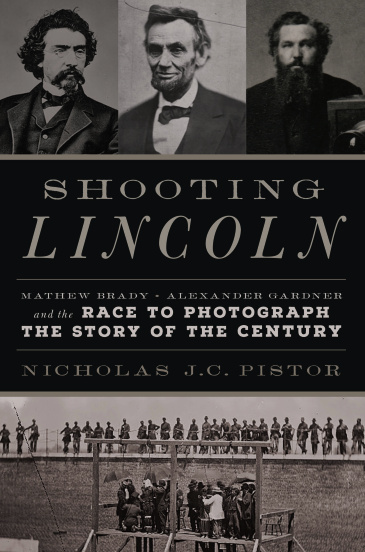 Abraham Lincoln was dead. The Civil War had just ended. The conspirators who helped plan Lincoln's murder were about to be hanged at the Washington Arsenal. Overcome with grief at the thought that her mother, Mary, might be put to death, young Anna Surratt went to the White House — a photograph of John Wilkes Booth that Anna treasured had been used to implicate Mary — to plead for her mother's life and obtain a presidential pardon.

Unimpeded, Anna entered the Executive Mansion. She made her way to the foot of the staircase leading to now-president Andrew Johnson’s office. A helpful guard directed her instead to the East Room, where Johnson happened to be at the moment. (It did no good.)

The Washington, DC, of 1865 was a different world. But the reality of our time is rooted in that one. Shooting Lincoln: Mathew Brady, Alexander Gardner, and the Race to Photograph the Story of the Century explores the beginnings of photography as two renowned personalities competed to bring the profession into the modern era. An engaging read for all audiences, this book will be enjoyed especially by those living in and around the nation's capital.

Mathew Brady was the better-known of the two photographers, and time in his studio was much sought-after. Portraits were Brady's specialty. He approached them as an artist. His iconic images, like that of Abraham Lincoln before his Cooper Union speech, have been famous since the photographer's time and into our own.

Pictures of well-known people helped keep Brady in business. He sold them as cartes de visite, a fad of the times which offered staged images of celebrities like actors, musicians, politicians, and government or military officials. A carte de visite was traded and cherished like a modern-day baseball card. Brady built his reputation in New York City, but he set up shop in Washington, DC, as the Civil War drew closer.

Initially, Alexander Gardner was Brady's apprentice. But Gardner tired of not receiving credit for his own work. The apprentice had other ideas for photography besides the portraits that were the specialty of Brady's shop. Gardner was more a man of the people. He wanted to use the camera for higher purposes, and he was drawn to what he thought were more consequential images of places and times.

Breaking with Brady, Gardner set up his first shop in Washington, DC. Gardner's photographic eye was better focused on what lay ahead than his mentor's had been. The former apprentice was good at managing money and identifying future sources of income, such as the Union government.

For both men and their clients, the business of photography was very much part of the war: “Guns were made. Cannons lined the field. Brass buttons were sewn into uniforms. And soldiers, at least the ones who had any money, headed to studios to get their pictures taken before the war.” Brady and Gardner were both pioneers. Before separating, the two men “perfected the wet-plate process, which allowed them to duplicate photos and sell them to the general public.”

Initially, the rivalry is framed in terms of each photographer's interactions with Abraham Lincoln and their access to battlefields. Photographic history was made at Bull Run, Antietam, and Gettysburg. As the story progresses, the focus turns to Lincoln's murder, his funeral, the hunt for John Wilkes Booth, and the rounding up of the conspirators.

Shooting Lincoln is a delight to read for its tight focus on each photographer's strengths and weaknesses as history unfolds around them and they try to make some of it on their own. Readers can't help but engage with the mysteries of: Who will be in the right place at the right time? Who has made the most useful connections? Whose work is more respected? Who will take the defining photographs of the era?

The texture of Washington is palpable. Those who don't know much about the city's rich Civil War history will delight in the familiar names and places that fill this book. Ford's Theatre, the Washington Arsenal, the Navy Yard, the Eastern Branch of the Potomac, and the Waterfront feature prominently.

Added to these places are heavy doses of smells, sounds, and temperatures, especially as the book builds toward a summertime climax with the trial, conviction, and execution of the conspirators. Only one person was selected to photograph the hanging, and he had just 48 hours to prepare for it.

The strength of this book is in its breezy style, which is more a topical presentation of information than an in-depth study. Those who've read a great deal about Civil War history will notice occasional misstatements, like the assertion that all enslaved people in the U.S. were freed when the Emancipation Proclamation was issued, and that all the North celebrated as a result.

Some of the citations are also questionable, like when sentiments expressed in Southern newspapers of Union-occupied cities are referenced. But those items are a small price to pay for such a compelling text.

Shooting Lincoln is an easy book to read, enjoy, and become engrossed in. The mass marketing of photographs was born in the Civil War era. And images of the Lincoln conspirators before, during, and after their hanging remain as disturbing and astounding today as they must have been 150 years ago.