Oedipus in Brooklyn and Other Stories

These spare, skillful tales are both introspective and illuminating. 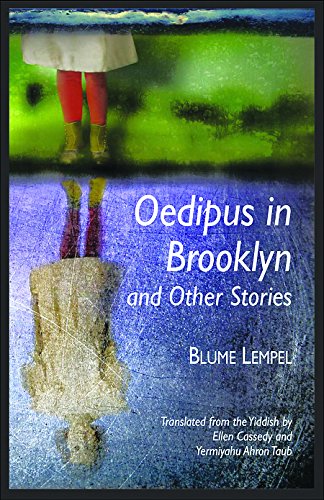 Does it make sense to talk about a writer’s voice when responding to a translated work? In the case of Oedipus in Brooklyn and Other Stories, a book with two translators, a distinctive English voice — a blend of attitudes, mannerisms, and rhythms — rises off the page. In what ways is it true to the Yiddish original? This reviewer will never know. Still, the voice tests boundaries between the private and the public self, intimacy and isolation, confidence and insecurity.

Presented as works of fiction, these stories — many of them brief vignettes — have the ring and the stance of polished journal entries or memoir. These memories, meditations, and musings, which inhabit the same settings that author Blume Lempel lived in or visited, are at once introspective and filled with sensory detail. The searching soul often moves by association, turning many corners.

A good many of these pieces are inner portraits of the narrator, just as many are the narrator’s exploration of one other character — a person who is important to her life and to her understanding of it.

Lempel moves us back and forth among the sights, sites, and sounds of Jewish Poland, intriguing Paris, multilingual Brooklyn, with its heavily Jewish neighborhoods, Long Island’s Long Beach, and a handful of other places. Different phases of the narrator’s life — childhood, young womanhood, motherhood, spousal dynamics — are braided into each other beyond the simple, single thread of neat chronology.

Lempel’s story titles, as translated, most often contain the name of a character: “Pachysandra,” “My Friend Ben,” “Yosele,” “Cousin Claude,” and “The Bag Lady of Seventh Avenue” are among the tales bearing such sparse, straightforward titles. Though the stories usually show the title characters in relationships (and Lempel has a fine ear for creating compelling dialogue), a recurrent sense of isolation nonetheless permeates the collection.

It springs out vividly in “The Little Red Umbrella,” when Janet Silver, out on a blind date, misplaces the umbrella that was meant to identify her for the poet she intended to meet. Janet seeks a relationship, though she has reveled in her independence. Suddenly, she is overwhelmed by the realization that freedom does not have the meaning it had in her younger days: “Now it meant free to bang her head against the wall and not even hear an echo.”

In “Neighbors over the Fence,” Jewish Betty tells the time by noting the routines of her neighbor, Mrs. Zagretti, an Italian widow. The women bond over their appreciation of horticulture. Mrs. Zagretti becomes a mentor to Betty, whom she considers a much better companion than her son’s wife, even though Mrs. Zagretti has long ignored her Jewish neighbor.

Feeling isolated from her son and daughter-in-law, she leans on this unexpected connection with Betty. She even confides her desperation: “Can you imagine feeling close to a fly?” She confesses that a fly’s death has shaken her: “I felt as if I’d become a widow for the second time.”

Here and elsewhere, Lempel connects this sense of aloneness to the Jewish condition. When Mrs. Zagretti goes on to complain about her feeling of being left alone in the world without friends or family, Betty is tempted to say that many have been left alone, orphaned, “because of the calculated, organized murder of a people.”

Throughout the collection, Lempel reveals a complex sense of her Jewish identity, and, when appropriate, that of her characters. In “A Yiddish Poet in Paris,” we get a glimpse of the Belleville section of the city, where the poet Sumer Gottlieb moves after first residing in the Latin Quarter.

In Belleville, his surroundings are “more Warsaw than Paris.” His sense of belonging is greater, his Jewish identity less subject to challenge in this polyglot environment. However, the church bells he hears are not like the ones in Warsaw, which “echoed with fear, with dread and the gentiles’ animosity toward the Jews.” (Of course, this sense of a Parisian haven will not exist once the Nazis invade France.)

In “The Bag Lady of Seventh Avenue,” the unnamed narrator remembers her obsessive sense of connection with a bag lady who squatted on a cushion outside of Penn Station. People dropped coins and gifts that the woman did not acknowledge. “Protected within her private isolation,” the woman seeps into the narrator’s fantasies. She imagines bringing the bag lady “bizarre gifts” including “strudel flavored with Jewish spices.” The narrator, herself somewhat isolated, eerily identifies with the bag lady. Unexpectedly meeting in a restroom, they gaze at one another with “stealthy curiosity.”

After passing by the bag lady over and over again, one day the narrator’s path is blocked by paramedics at the corner of 34th Street and Seventh Avenue. She has a premonition; yes, the bag lady is lying there, bleeding. The narrator takes the lady’s many bags and shares the ride to the hospital. But before that she notices the woman’s name on a medallion “nestled between her breasts.”

Rosa Shapiro-Scott. Shapiro, the maiden name of the narrator’s mother. Coincidence? Fate? One day, the narrator visits her parents’ graves. They now have a neighbor. After reading Rosa’s gravestone, the narrator realizes that the questions forming within her “must die stillborn, sealed away for eternity.”

Indeed, there are more questions than answers in Blume Lempel’s stories: profound and timeless questions laden with deep psychological insights. Her craft is pure; not one word is wasted.