I Couldn’t Love You More: A Novel

A Magdalene Laundry looms over three generations of mothers navigating life and loss. 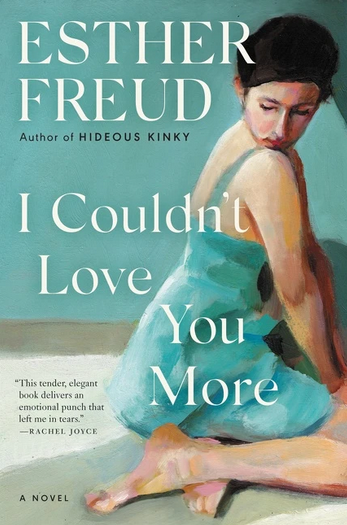 In her new novel, I Couldn’t Love You More, prizewinning author Esther Freud — great-granddaughter of Sigmund and daughter of painter Lucian — weaves a multi-generational tale of love, loss, and motherhood spanning 52 years. Aoife and Cash Kelly marry in 1939 and run a pub together in London before moving to a farm in Ireland. Aoife is a dutiful wife and compassionate mother who lives in the shadow of her cantankerous, no-nonsense husband.

Twenty years later, Aoife and Cash’s 18-year-old daughter, Rosaleen, can’t wait to leave St. Joseph’s boarding school — which her parents forced her to attend — for London, where she meets sculptor Felix Lichtman. Although he is more than twice her age, the two embark on a sensual affair, and Rosaleen quickly falls in love: “He’d woken her, changed her, shown her how it felt to be alive.”

Felix is thrilled when she gets pregnant, telling her, “I couldn’t love you more.” But when a tragedy pulls him from Rosaleen’s life, she suddenly finds herself unmarried and on her own without a plan. How will she possibly have and raise a baby by herself?

Aoife realizes her daughter’s secret when Rosaleen comes home for Christmas. Yet the older woman doesn’t say a word about it and is glad when Rosaleen doesn’t either and returns to London. Although she feels guilty for hoping Rosaleen loses the baby and asks God for forgiveness, Aoife believes her first duty is to Cash, who’d want nothing to do with an unwed, pregnant daughter.

In desperation, Rosaleen seeks out a priest. He, in turn, sends her to the Sisters of Mercy at the Convent of the Sacred Heart in Ireland. Although the convent is close to her parents’ home, she doesn’t contact them. She also doesn't know that the convent is a workhouse, known as a Magdalene Laundry, where she’ll remain — along with 350 other young ladies — as an indentured servant until her “debt” to the sisters is paid.

When Rosaleen discovers the convent intends to give her baby up for adoption, she yearns to escape but has nowhere to go. Both her pride and her unwillingness to upset her parents prevent her from asking for help from her family. She must bear her burden alone.

A generation later, Rosaleen’s surrendered daughter, Kate — a 30-year-old artist in London — is trying to keep her own family together. She’s a wonderful mother to her young daughter, Freya, and tries to be a supportive wife. But her husband, Matt, is an alcoholic wannabe rock star, and it becomes more difficult to live with him as his addiction spirals out of control.

Kate knows she was adopted and obsesses over finding her biological mother. Kate fancies she sees her everywhere — on the bus, walking down the street, on a billboard advertisement. As Kate investigates the identity of her parents and the story of her birth, she discovers the horrors her mum experienced at the convent and grows even more determined to track her down.

Throughout I Couldn’t Love You More, Freud takes readers into the lives and hearts of three generations of women who each have a different perspective on what it means to be a mother. The author also reveals the barbaric practices of Ireland’s Magdalene Laundries. There, the Catholic Church provided meager care for pregnant girls and delivered their babies, in return demanding the girls perform backbreaking work, primarily washing nearby townspeople’s laundry in huge vats of boiling water — a dangerous and taxing chore.

Freud’s inspiration for the novel was her own mother, who got pregnant at 18 and was so “terrified she’d be discovered and sent to a Home — a workhouse for ‘morally defective’ women — she kept the news a secret.” Freud wondered what her own story would’ve been if someone had discovered her mother’s pregnancy or if she’d sought help from the wrong people. I Couldn’t Love You More is her imagination’s answer to that question.

Although occasionally hard to follow when the narrative changes its point of view or time period, the book is soulful and powerful. Rich with raw emotion, Esther Freud’s beautiful story evokes a visceral sadness for the plight of each woman and a feeling of profound relief that Magdalene Laundries no longer exist.

The Exact Nature of Our Wrongs: A Novel

A trio of novels takes us into the abyss.