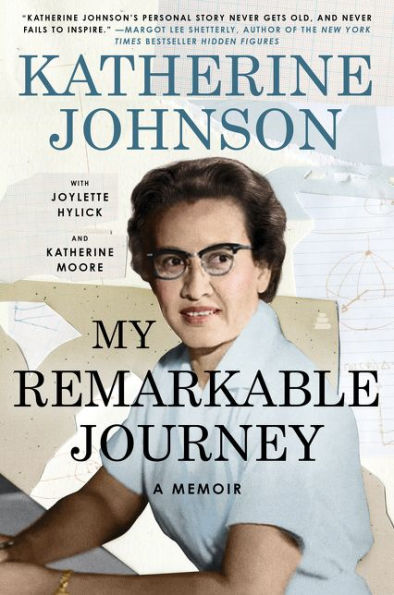 Just over 100 years ago, West Virginia’s White Sulphur Springs was provincial, pastoral, and prejudiced; a place where racism was nursed by the rich and recumbent — especially the genteel at the Greenbrier:

“[It] became one of the world’s most popular vacation getaways for the wealthy…the resort has counted among its guests twenty-seven U.S. Presidents, royalty, diplomats, business tycoons, and other high-society family members…The property also includes ninety-six guest and estate homes…Locals lived in the town that sprang up outside the resort, and many worked there as servants. But they could not attend any of the events.”

According to Katherine Johnson’s posthumous memoir, My Remarkable Journey, co-written with her daughters Joylette Hylick and Katherine Moore, Johnson’s life began in 1918 in White Sulphur Springs, but social obstructions fell in fast:

“Even as I grew up and was told by law that I had to sit in the back of buses, climb to isolated theater balconies, use colored water fountains and bathrooms because of my race, I chose to believe Daddy. I was just as good as anyone else, but no better.”

Opportunities for education, employment and elevation were hindered, hampered, and held back for Negroes — then the popular parlance — but Johnson’s father devoured defiance and parlayed his acumen into an opalescence of occupations: fortunate farmer and Herculean handyman; Greenbrier bellman and venerated veterinarian; master mathematician and lionized leader in the Black community:

“As a child, I was just a little girl I awe of…Daddy, and I beamed when friends and family told me I was just like him. I heard that often when it came to numbers. It was well known that I loved counting everything I saw, and I always pushed myself to go higher and higher. Math just made sense to me, and I caught on easily, even before I started school.”

Greenbrier County, however, did not offer public education for Negroes beyond the eighth grade, but the Colemans, who had zeroed in on providing their children with college educations, relocated and enrolled them at the West Virginia Colored Institute. The family resided in town during the school terms but summered in White Sulphur Springs.

In the meantime, Johnson started school at 4, finished senior high when she was 14, and graduated from college at 18 with degrees in French and math — plus the highest grade-point average in the history of West Virginia State.

During her academic ascent, Johnson took every computative course tendered and amassed a myriad of mentoring professors, including W.W. Schieffelin Claytor, the third Black American in the country to receive a Ph.D. in mathematics and the first to publish in a juried research journal. Dazzled by Johnson’s capabilities, Claytor crafted custom courses for his protégée that were packed with a punch of geometry, which, one day, would dwarf the know-how of the engineers at NASA.

Afterward, and despite the debilitating Depression, Johnson slipped serendipitously into a position teaching French and piano to fourth-, fifth-, and sixth-grade Black children in segregated Marion, Virginia. Soon, she resigned to marry James (Jimmie) Johnson, birthed three daughters, and, after a respite, returned to the classroom. Teaching, however, had turned into such a low-paying profession — especially for Negroes — that the Johnsons had to accept menial summer jobs to subsist.

In 1952, Johnson learned that “a federal agency in Hampton was hiring Negro women with degrees in math. The region was home to one of the country’s largest naval bases and five other major military facilities, and was still bustling with job opportunities after the war.”

Johnson asked herself, “Was this the path?...Confident that we were making a decision that would change our lives for the better, Jimmie and I looked at each other and agreed: yes.”

By 1953, Johnson was employed at the National Advisory Committee for Aeronautics (now NASA) and placed with a coterie of “human computers” performing mundane mathematical tasks until she was lifted out on loan — and never returned — to a galaxy of male engineers engrossed in specialized research related to aspects of aviation.

In 1961, Johnson calculated the trajectories of America’s first manned space mission, piloted by Astronaut Alan Shepard. A year later, John Glenn, fearful that the path plotted by the new IBM computer was incorrect, delayed his departure and instructed NASA to “get the girl to check the numbers”:

“I was sitting at my desk when the phone call came in…As the engineer relayed the request to me, I remained calm. This was a major assignment, but I had done this long before the computer made it seem simple…I quickly assembled my meager supplies…got busy on my calculator, working every equation by hand for the trajectory of a mission that was scheduled to include three orbits…Every step of the way, I paused to check my numbers against the computers to make sure there was agreement…One and a half days later, I finally finished…The numbers agreed. Our astronaut was ready to go.”

In a 33-year career of perfected prowess, which encompassed Johnson’s mapping strategy to catapult Neil Armstrong to the moon, the public was unfairly denied awareness of her tours de force as well as the triumphs of her colleagues Dorothy Vaughan, Eunice Smith, and Mary Jackson. All of them were “Hidden Figures” until the lucky success of the 2016 movie.

Johnson, at least, was able to absorb the tingle of applause, acclaim, and adulation — and just in time. She died in 2020 at age 101.

The Art of Grace: On Moving Well Through Life

An earnest though uneven ode to poise.