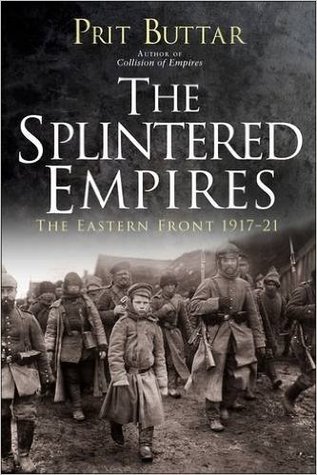 Prit Buttar's The Splintered Empires: The Eastern Front 1917-21 continues his enlightening journey — begun with Collision of Empires: The War on the Eastern Front in 1914 — through the briars and brambles of the brutal, chaotic battlefields of World War I. This newest volume is an especially important contribution to Americans' understanding of how today's Europe (and the United States' role in it) came about.

There, in the past, lies the rise of 2017's ultra-nationalism in Hungary and Poland, particularly the security minefields that have been laid from the Baltic to the Black seas. There, too, were sown the seeds of Vladimir Putin’s insistence that Lithuanian, Estonian, and Latvian independence is “illegal,” and that Crimea is the Kremlin's.

The Splintered Empires effectively chronicles the seemingly out-of-control events of the early 20th century, from the assassination of Archduke Ferdinand in 1914; to the revolutions that upended a tsarist autocracy and replaced it with Bolshevik totalitarianism; to the slowly unfolding disasters of the Hohenzollerns in Germany and the Habsburgs in their polyglot empire; to the Pygmy Wars’ last frantic scramble for more land and more power for the often-ruthless survivors of the Eastern Front.

The starving, the burnings, and the killings continued for years after the signing of the Treaty of Versailles — the point at which many of us here in the United States turn off our interest in “the dusty past” of World War I history.

Yet Buttar’s masterful study reveals the shortsightedness of that mindset. Here, he quotes an Austro-Hungarian diplomat from almost 100 years ago:

“Versailles is not the end of the war; it is only a phase of it. The war goes on, though in another form. I think that the coming generation will not call the great drama of the last five years the World War, but the World Revolution, which it will realise began with the World War.”

Twenty years after the treaty, Adolf Hitler lived and breathed the “stabbed in the back” myth that Germany had not been defeated on the battlefield, but in the corridors of Berlin and Versailles.

“Look to the East and see all the lands that are now ours” was a crucial rallying cry in perpetuating the myth. German military leaders like Erich Ludendorff and Paul von Hindenburg planted here, there, and everywhere that narrative, then fertilized it — through whisperings, writings, and speeches — and watched it ripen into a poisonous harvest. Look east, they urged, for more “living room.”

(In the 1930s, writes Buttar, they and others would point to the large German-speaking communities “in the new nations of Europe,” such as Poland, the Baltics, Czechoslovakia, and Romania (with its oil fields), as reasons why Germany’s borders needed to be adjusted yet again. Diplomatically, if possible; by force, if not.)

As the fighting dragged on in WWI, morale sagged in all the armies, but especially the Russian and sections of the Austro-Hungarian. Each empire was digging ever-more deeply for manpower — boys, old men, the lame, the halt, the weak-sighted — to replace the sickly, gassed, maimed, and dead. Civilians across Europe, slowly starving and weakened by waves of influenza, were dying of disease and privation.

Following America’s entry into the fight and Germany’s failures on the Western Front,  Ludendorff's strategy (if it can be called that) in the twilight of the war came down to breaking through with a massive offensive. Then each commander was to adapt to whatever conditions emerged. As any child who’s ever played football in an empty lot would recognize, the plan boiled down to “go out and lose your man and I'll throw you the ball.”

It failed for numerous reasons.

As a result, the newly assertive Reichstag dispatched Ludendorff and kept “long knives” at the ready. Gone, now, was the halo above Ludendorff's head, and tarnished was the one over von Hindenburg's. Gone, too, was the unquestioned praise of the victors at Tannenberg in 1914 “as military geniuses and the saviours of Germany.” Viewed four years later, explains Buttar, the early days of WWI were revealed to be a naive time when the men of vast empires believed the fight would be a quick settling of accounts.

Buttar's depictions of corollary events in tsarist Russia — with its exhausted armies and mutinous sailors, collapsing industries and pitiful rail lines, plotting revolutionaries (including Trotsky and Stalin) and self-proclaimed saviors like Alexander Kerensky and Gen. Lavr Kornilov — are among the strongest points in this book. The confusion among Lenin's Bolsheviks when they finally made their successful grab for power in Petrograd is borderline slapstick on its surface, though ultimately tragic.

The intrigues, power grabs, bloodletting, toppling of rulers, and erasing of borders during this tormented time would rend the fabric of history. And one of the most enduring gashes, writes Buttar in this intelligent, accessible work, was the irreparable splintering of Europe’s empires.

Life in the trenches of World War I, recorded by one who endured four years there.