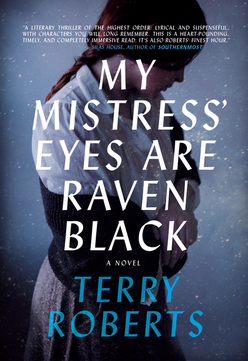 In Terry Roberts’ new historical thriller, “Your tired, your poor, your huddled masses” need to watch their backs around the very people who are supposed to protect them. My Mistress’ Eyes Are Raven Black takes the reader to Ellis Island in 1920, where a young, pregnant Irish immigrant has disappeared under mysterious circumstances soon after her arrival.

Turns out, the missing woman was related to someone with influence. She was supposed to have been met by her “uncle,” a New Jersey congressman who demands that she be found immediately. The Justice Department is brought on board to investigate.

The novel is told from the point of view of missing-persons specialist Stephen Robbins, a former runaway whose being resides in New York City, but whose soul longs to return to North Carolina. He’s assigned to locate the woman by the Nameless Man, who says he works for the Bureau of Investigation.

Shortly thereafter, Stephen finds himself at Ellis Island’s isolation hospital, where he meets Lucy Paul. She’s a nurse working for the American Medical Association who, for the last six months, has been investigating the increasing numbers of dead or missing immigrants since the end of World War I. Upon their first meeting, Stephen asks Lucy to clarify:

“What do you mean, disappearances?”

“People suddenly dying who have nothing wrong with them, or at least nothing fatal. And sometimes, like with your Irish girl, disappear entirely. Physically, corporeally gone.”

He rapidly learns there’s something nefarious happening on the island much larger than what brought him there. He and Lucy team up to uncover the truth about the deaths and vanishings; in the process, they find themselves growing closer as they share their days and nights. Their investigation eventually uncovers a ring of conspirators whose choice of victims is not random. Yet as they close in on solving the horrible riddle, they become targets, too.

Early on, Stephen interviews Nurse Taylor, a woman elevated almost to sainthood by hospital staff, and questions her about the circumstances surrounding the Irish woman’s disappearance:

“What do you think happened to Ciara McManaway?”

“I think that once she came to understand that we intended to keep her isolated until she delivered her baby, she very quietly slipped away. I think she somehow made her way ashore…stowed away on a ferry. I like to think that she’s found her family and will live happily ever after.”

I found myself nodding at her, even found myself believing her. Not that it had happened that way, but that she might think so.

“So there’s nothing dangerous here?”

“Oh no. There are no monsters here. But even so, Stephen…even so, please be careful in your searching. I’ve grown fond of you during your short time with us, and I would feel terrible if anything happened to you.”

Indeed. Everyone in this story has secrets — secret pasts, secret names, secret fetishes, secret ancestries — and no one wants them to surface. The reader realizes at the same time as Stephen that he’s treading into dangerous territory the more he pokes around.

As much as this novel reads like detective fiction, it’s also a love story. From their first meeting, Stephen and Lucy’s chemistry crackles with playful flirtation and develops into a bond that brings them together as both investigative partners and lovers. The author skillfully captures the passion of a new affair while pacing the narrative like a thriller. The short chapters move quickly, and I predict they’ll tempt many readers to stay up past their bedtimes, just as I did.

In My Mistress’ Eyes Are Raven Black, Terry Roberts expertly blends the thriller and romance genres to tell a timely story about the terrifying extent to which some people will go to assuage their fear of “the Other.” I couldn’t put this book down.

Sarahlyn Bruck is a community college writing professor and the award-winning author of two contemporary novels: Designer You and Daytime Drama. She lives in Philadelphia with her husband, daughter, and cockapoo.