A "complex depiction of the buffeting forces of Nigerian life and the allure of dreams." 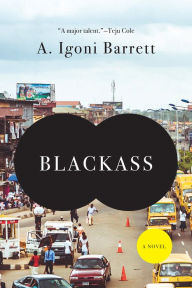 A. Igoni Barrett’s Blackass has many identities, often contradictory. It’s a Kafka-inspired (though not precisely Kafkaesque) fable, a gritty (but also funny) depiction of contemporary Nigeria, a bleak (but also humane) study of the wounds colonialism has inflicted on the African soul. The book’s many faces — and even its wily misdirection — mirror those of its two main characters.

Blackass tells, most prominently, the story of Furo Waribiko, a hopeful but initially hapless schlub trying to grab a piece of the emerging Nigerian dream. Now is the perfect time for the next Great Nigerian Novel: The country’s economy has had a strong decade, transforming more and more of its citizens into professionals, consumers, and, apparently, Twitter addicts.

Just off the radar in Blackass is the fact that the boom has been built mainly on oil exports — a fragile foundation that makes success the product of back-scratching and personal connections. Furo has been struggling to find a way into the new elite for years, with little success — until one morning, everything changes.

Unexpectedly, inexplicably, he wakes up white.

The book’s opening scene, in which Furo frantically maneuvers to get out of his parents’ house without his transformation being detected, is a slapstick update of The Metamorphosis (which Barrett points out in the epigraph — not the only time this book takes readers firmly by the hand).

But where Kafka’s clerk becomes the insect society sees him as, Barrett’s striver becomes, through his whitening, the success he always knew himself to be. As he journeys across Lagos — chaotic, man-eating Lagos — he finds his once-insignificant self the object at turns of wonder, affection, and admiration, solely because of the color of his new skin.

Furo learns (as only a vanishingly few actual white people ever do) that he quite likes being white. With rapidly diminishing hesitation, he takes the privileges that flow in his direction. He coldly cuts off his (embarrassingly black) family, talks down to those who are suddenly his inferiors, and repeatedly betrays those who help him.

Coming from one of Nigeria’s most respected young authors, it’s a decisive message: that even as a light flickers at the end of the continent’s long tunnel, even a half-century after Fanon, the shadow of whiteness still hangs over Africa. (Fanon is, of course, also appropriately cited here, along with Ovid — in case readers needed a glowing neon sign spelling out “THIS BOOK IS ABOUT IDENTITY.” Luckily, no footnotes.)

As cynical and mostly unlikeable as Furo is, Blackass surrounds him with complex, funny, and self-aware Nigerians (whom he frequently tramples). Drivers, executives, roadside vendors, security guards, and prostitutes, they love their country and hate it. They hang onto their humanity against a situation that precludes sentiment. They are fearful, greedy, brave, and generous, inviting the one comparison Barrett doesn’t make on our behalf: to Dickens.

But Furo Waribiko and his journey, rich as they are, are not ultimately this book’s center of gravity. That role belongs instead to the story of Igoni. Not, that is, the story of A. Igoni Barrett, the author of the book, but of the character with his name and physical features whom Furo encounters in an upscale mall.

At first, this looks like a postmodern wink, very similar to Percival Everett’s self-deprecating turn in his own I Am Not Sydney Poitier. But it’s much more than that. Book-Igoni becomes as, or more, invested in the stakes of Furo’s transformation than Author-Igoni, first following and investigating Furo, and then taking him as inspiration for the book’s second, far more profound transformation. For reasons that are only hinted at, the author’s fictional avatar becomes a woman.

The shift is not acknowledged or described directly. There is slight poetic foreshadowing, and then Igoni is female, being hit on by a corpulent Nigerian big man. A hallucinatory quality persists through Book-Igoni’s portion of the tale, adding formal richness to a novel that, despite its surreal inciting event, is mostly focused on the observable everyday, and written in a matter-of-fact voice. I won’t spoil the final complex entwinements of this femi-fictionalized Igoni and Furo Waribiko, but even a tentative sense of linearity is ultimately unwound.

The formal split in the novel — dreamlike on the one hand, firmly grounded on the other — is mirrored by its characters’ moral differences. Igoni, the author and investigator, is inquisitive and experimental, taking joy in ambiguity, and embracing transformation. But Furo is preoccupied with keeping his identity clear and precise — if not necessarily truthful. To navigate Nigerian bureaucracy and business, he invents elaborate explanations for his status as a white man who is culturally Nigerian, rather than sharing his strange experience.

(In fact, this is either a slight structural flaw of the novel or just a testament to Furo’s own shortsightedness — telling those around him that he’s a black man who just looks white wouldn’t diminish how useful he is to them.)

Thanks to his duplicity, Furo’s life, even after he has devoured the fruits of whiteness, remains fraught with anxiety, while Book-Igoni’s is increasingly joyful, tolerant, and positive. In the end, he/she tries to pass that acceptance on to Furo, just as author A. Igoni Barrett has tried, through Blackass, to send a message to his own countrymen.

That message borders on heavy-handed. The narrator of Igoni’s segments spells out for us that Furo is selfish and thoughtless. But that’s at odds with the book’s own complex depiction of the buffeting forces of Nigerian life and the allure of dreams.

Though Furo’s sudden ability to fulfill his once-hopeless ambitions is premised on the modern era’s fundamental flaw — racism — it seems unfair to let him face judgment for the weight of history. Thankfully, Furo is finally offered a doorway to redemption — but it is left unclear whether he, or the country his story brings to life, can open it.

David Z. Morris's writing has appeared in the Atlantic, Word Riot, Wired, MilkFist, Aeon, Fortune, and Maximum Rock n' Roll. More of his commentary on fiction, film, and music can (occasionally) be found at blownhorizonz.com.