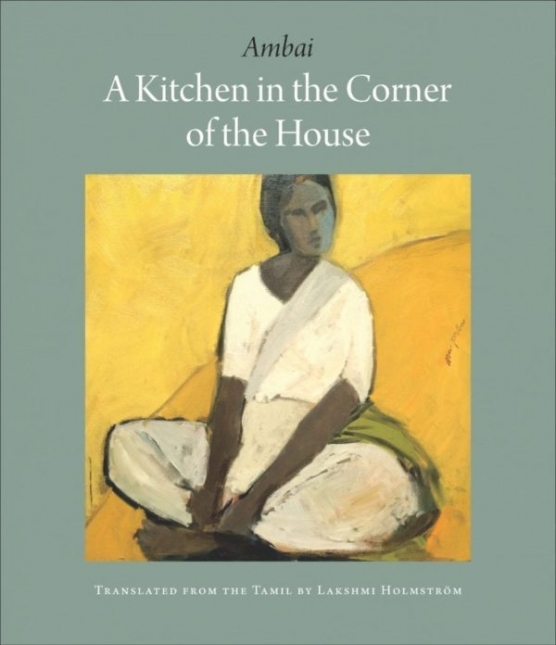 In the story collection A Kitchen in the Corner of the House, Ambai, a pseudonym for the feminist writer C.S. Lakshmi, pieces together letters, journal entries, and notes to create a vibrant montage portraying the lives of Tamil women, from birth to adolescence, womanhood to old age.

In a society where women’s voices are hushed by tradition everywhere except, perhaps, the kitchen, Ambai has crafted stories as diverse and savory as the dishes created in this space — one like many others whose window overlooks distant mountains of aspiration usually obscured by a clothesline of “trousers, shirts, pajamas, saris, and petticoats.”

Among the most poignant of the Kitchen narratives is “My Mother, Her Crime,” wherein Ambai begins, “Whenever I think of my mother, certain incidents flash through mind and stab my heart.” The images are of a mother’s dark blue sari, her hair gathered in a knot, a small adjacent room, breastmilk in a bowl, and tears.

As with Ambai’s other stories, there isn’t always a clear connection between events and the images they evoke, except that her mother is the queen of this piece and, in each story, a woman is central to, though not a centerpiece of, Tamil hearth and home and life itself.

The Tamil people, mainly from South Asia and with a long recorded history, find their identity in their language. This linguistic heritage gives Ambai, who was born in Tamil Nadu, her unique voice and vision. Because of the varied and sometimes irregular use of writing styles and occasionally disembodied dialogue, each Kitchen story is best experienced as a journey to an exotic locale savored for its sensuality, mystery, and daily life at times more easily imbibed than understood.

In Tamil culture, comprehension often seems to come first through the senses, and the periodically primitive scenes in Kitchen serve to give the reader a dawning awareness of the degree to which the identity of Tamil women is both prescribed and proscribed.

To best portray Tamil culture and traditions, the translation of A Kitchen in the Corner of the House, by Lakshmi Holmström, doesn’t shy away from preserving prose and storylines that don’t always follow a linear path. The sinuous nature and apparent incongruity of the narratives is perhaps true to life lived anywhere but especially to life lived under a blazing sun and in mountains more appealing from a distance.

Holmström’s translation also retains the sense that the stories, even when told through snippets of poetry and snatches of dialogue, are at once made up and authentic. Yet they are all stories, no matter how brief or drawn out, that reflect the lives of the people they represent, as Ambai says, “all magic, all true.”

At a time when the role of women in society is again shifting from expectation and acquiescence to analysis and discovery — from the Association for Women's Rights in Development, to the #MeToo movement, to U.N. Women — Kitchen offers an unabashed look at who women are, who they wish they were, and the selves of which some are only dimly aware and others not at all.

Paradoxically, Ambai achieves this scope through the use of intimate details, and she is unafraid to show women of all ages and types in their most and least alluring moments in scenes that are earthy but not earthbound.

In defiance of tradition, yet mindful of and influenced by it and by Tamil culture, Kitchen ends with “Yellow Fish,” a small story of a common fish in high summer, when the sea is shrunken, the waves spent. Yet the eye is compelled by the sea, the white boat that has arrived: “the forerunner.” On the burning shore is one yellow fish, cast aside by the fishermen. All around it, the men, quick and efficient, carry on sorting their catch.

Meanwhile, the mouth of the fish, though silent, closes and opens like the mouth of the infant Jalaja, who “pushed and bumped her way into the world,” her name already decided, an infant whose ashes have ended up in the selfsame sea. Near the end of the story, the narrator asks a young fisherman if he will throw the yellow fish back into the water, returning it to whence it came.

As the last story in the collection, “Yellow Fish” raises questions with no easy answers. Will men carry on sorting fish as they sort women: quickly, efficiently, oblivious to those cast aside? Will women’s names, identities, and futures always be decided by others? Will the young men of the Tamil culture one day change that?

A Kitchen in the Corner of the House poses these questions and more by depicting an endless journey that is often harsh, sometimes beautiful, frequently mysterious, and always exquisite.

Adele Annesi is an award-winning writer, editor, and teacher, and winner of the Editor's Choice Award from Poetic Voices in America, and co-author of Now What? The Creative Writer's Guide to Success After the MFA. Her work has also been anthologized in Banking the Bacon: Essays on the Success of Women from Chatter House Press.