My Life of Crime: Essays and Other Entertainments

This wry collection is by turns witty and poignant. 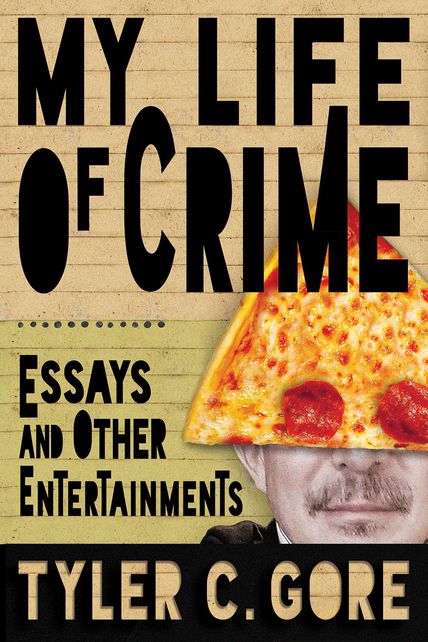 You know that friend, the one you talk to only once in a while, but when you do, you’re captivated by his stories and the way he tells them? You’ll be sitting in a bar, say, and he launches into a tale about something: navigating his family’s over-stuffed house; the time he had to have an emergency appendectomy (just like the kids in 1970s sitcoms); tending to his sick cat; or the way his oddball superintendent fixed everything — broken locks, plumbing, boilers — with paper clips.

Before you know it, you’re taking in every word and wending your way along the paths and detours of his stories, jumping from instance to instance as though leaping over the sooty, sloppy puddles of melting snow on the sidewalks in his Brooklyn neighborhood. You’re laughing, he’s laughing, and you barely notice when things go sideways — when the pain, the worry, the grief that underscore even the funniest moments in life make you swallow the lump that has formed in the back of your throat and hold your breath until he makes you laugh again.

This is what it’s like to read Tyler C. Gore’s My Life of Crime. A collection of 11 brief pieces and one very long essay, the book covers a variety of topics Gore digs into with a willingness to inch up to the line of what some might call oversharing. “Stuff” is a rumination on his family’s habit of collecting and gathering (or hoarding), and on the resulting piles of detritus that cover their home — and the author’s own:

“My wretched little apartment on Avenue C was stuffed with rusted parts of cars, odd bits of discarded kitsch, mannequin body parts, gears and tools (I particularly like things made of metal), shiny bits of beach glass, plastic toys.”

While “Stuff” is full of oddball tidbits like this, it’s also a portrait of a family’s grieving process. “It’s strange,” Gore said in a recent interview for this publication, “but when I’m working on an essay, I find I’m able to treat myself as a character — and that often means revealing certain uncomfortable or unflattering truths.”

And yet, the collection is sprawling, and not always in satisfying ways. A few of the shorter pieces seem like afterthoughts, not quite up to the richness and resonance of the others. Like “Stuff,” the essays “Clinton Street Days,” “Jury Duty,” and “October’s Rain” are full of the people and peculiarities of New York and are told with an almost wide-eyed wonder of someone in love with the place — even the worst of it.

“October’s Rain” is particularly lovely in its melancholy chill. At its end, Gore sees a friend through the window of a café; from this encounter comes a line I won’t soon forget:

“There she sat, alone at a little wooden table, a newspaper and mug of coffee set before her, and I forgot my sadness, my bittersweet, wonderful, October sadness, and walked inside.”

The bulk of the book is taken up by “Appendix,” a novella-length essay. In it, Gore uses the trajectory of his 2016 bout with appendicitis as a framework to talk about many, many things. Readers are taken on an “intestinal journey” (his words) from his insistently gurgling constipation through the surgery and its complicated, painful aftermath.

The essay winds through reflections on healthcare, politics, grief, marriage, pets (or one pet, Luna, Gore’s precious kitty), friendship, Donald Trump, race, drugs, and a whole lot of other stuff. “My narcotic haze and horizontal orientation made it difficult to distinguish the boundaries between me and all the stuff in the world that was not me,” he reflects shortly after the operation.

Toward the end of the piece, Gore adds a footnote: “I know. We’re off track again, but bear with me just a while longer, friend. My tale is almost told, and this is our last detour.”

Then, in a lush and skillful summary of the year of his surgery and the following years scarred by the Trump presidency, he leads up to what he calls the “fourth year of the Turd Emperor” and covid. Many writers have tried to capture this particular time, and many more are still grappling with it. Gore does a remarkable job of expressing the panic as well as the possibility those days of isolation and enforced quiet provided.

I did wonder why “Appendix” wasn’t given its own book; at nearly 200 pages, it’s plenty long enough to stand alone. But if it had, we would miss “October’s Rain” and we would miss “Stuff.” And like those stories your friend shares with you at the bar, some things are too good not to be told.

Patricia Ann McNair is an associate professor in the English and Creative Writing Department of Columbia College Chicago. Her most recent story collection, Responsible Adults, was named a distinguished favorite by the Independent Press awards. The Temple of Air (stories) was named Chicago Writers Association Book of the Year, and And These Are the Good Times (essays) was a Montaigne Medal finalist. She lives in Tucson.

Don’t Count Me Out: A Baltimore Dope Fiend’s Miraculous Recovery

Never underestimate our capacity for redemption.