An Interview with Tyler C. Gore 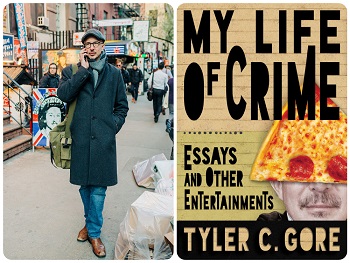 I met Tyler C. Gore the first week of our freshman year of college, and we bonded over books, Trivial Pursuit, scorn for the status quo, and what I will euphemistically call “having fun.” As he hilariously illustrates in My Life of Crime: Essays and Other Entertainments, having fun can get messy, especially when it involves other people, which it usually does. With erudite wit and a genius for storytelling, Gore conjures the absurdity, contradictions, and complexities of contemporary American life in a high-low book that’s a triumph of enlightening entertainment.

My Life of Crime made me laugh until I cried and cry until I laughed. Would you classify yourself as a humorist or an essayist?

Well, that’s very gratifying to hear! I would definitely classify myself as an essayist, but the personal narratives I write are for the most part comedies — often with a bittersweet edge but comedies nonetheless. So, humor is essential to my work. I find that comedy shines a powerful light on our humanity: we are all in some respect ridiculous, misguided, vain creatures, and there’s actually something wonderful about the fact that we can recognize our own absurd natures and laugh.

Truthfully, there’s no serious art that doesn’t have elements of humor, and conversely — as any stand-up would tell you — most comedy comes from a place of sadness, pain, or anger. It’s not funny unless it hurts a little.

Even though we’ve been good friends for lo these many years, I discovered new things about you from these essays, especially regarding your family, revealing a vulnerability you don’t often show. How did it feel to expose yourself in that way?

Personal essays are stories and have similar requirements to good fiction. Characters have to be multidimensional, flawed, and vulnerable or they won’t live on the page. But this can get weirdly intimate when the central character is yourself, your real self. It’s strange, but when I’m working on an essay, I find I’m able to treat myself as a character — and that often means revealing certain uncomfortable or unflattering truths.

But there’s a secret to it. I think sometimes of the old-school burlesque dancers — you know, with the feather boas, fans, and sequins. Their art was to make you think that you were seeing a lot more than you really were. It’s a bit like that with personal essays — what you see is what I choose to let you see. But you don’t get the full Monty. Considering that I write about myself all the time, I’m actually a very private person.

The truly difficult thing that all personal essayists have to deal with is how your stories intersect with other people’s stories. It’s one thing to expose your own flaws and vulnerabilities, but it’s another to write candidly about the people in your life. You worry about collateral damage. I try to limit that in various ways. It’s nice to have friends.

I love your portrait of an ever-changing New York City through the years. How has being a New Yorker influenced your writing?

Profoundly. I’ve lived in NYC most of my adult life, and in my writing, the city is almost a character in itself. In many ways, it can be a brutal place to live. But it’s never boring.

Two stories. One weekday afternoon last summer, as I was running through Prospect Park, I came across a breathtaking scene. A large group of young women, all dressed in these fantastically gorgeous, ornate African costumes — with elaborate hairstyles to match — had gathered in the middle of the Long Meadow. And they were dancing: a slow, precise, highly stylized dance, their arms undulating gracefully in the air. No music, few people in the park at that hour. Perhaps it was a dress rehearsal for some performance later, but I felt as if I had stumbled upon a secret gathering of goddesses. I stood frozen in awe for a few minutes, dripping with sweat, entranced by the magic and beauty of the moment. And then I put on my earphones and continued on my run.

Another day, I was biking down Fourth Avenue and spotted some lunatic by the curb struggling to pull a huge chunk of broken cement out of the sidewalk. As I passed him, he hurled it right at me. It missed and landed in front of my bike. I skidded to a stop. Without thinking, I told him, quite calmly, “You are a total fucking asshole.” Incredibly, he was outraged. “What did you say?” he shouted — and lurched forward to attack me. I quickly hit the pedals and sped away — and he chased me up the block, cursing and shouting the whole time. I hauled ass, fast as I could, for several blocks to a nearby police station, where I stopped to catch my breath, anxiously peering down the avenue to make sure I’d lost him.

One way or another, New York never fails to deliver. Stories fall into your lap here.

Describe your writing process. Do you sit down to write an essay with a theme and structure in mind, or do you see where your fingers take you?

I definitely start out with a general idea of the story I’d like to tell. For the shorter essays, I usually scribble down a kind of brain dump of all the relevant details and structure the piece from my notes, but later I’ll start moving chunks of the story around. In short pieces, you have to keep the narrative tight, so I tend to cut a lot out during the drafting process. As with fiction, themes or motifs emerge as the piece takes shape, and once I pick up on them, I’ll subtly amplify or refine them.

Writing “Appendix” — the novella-length essay that takes up the last two-thirds of Crime — was a far more complex process. Tons of notes, and I had to grapple with a complicated timeline of events. Working on the structure presented a lot of difficulties. I wanted to structure it like a novel, with a narrative and emotional arc, and that can be a very tricky matter when you are working with real — as opposed to invented — events. I learned a lot while writing and revising “Appendix,” but it took a lot out of me, too.

Speaking of “Appendix,” in it we see you faced with several existential crises — appendicitis, the illness of your cat, Trump, and covid, among others — and emerge with a newfound humility. Is Tyler Gore all grown up?

Ah, probably not. I haven’t ordered pizzas for the neighbors in a long time, but there’s some part of me, for better or worse, that just refuses to grow up. I’m still the kind of guy who thinks it’s a capital idea to ingest a large and unknown quantity of hallucinogens while visiting friends at the shore for the weekend — which went down about as well as you’d expect. And I still carry a bunch of Sharpies around in my bag in case I feel compelled to deface a billboard in the subway.

But yes, as I’ve grown older — and especially in light of all that’s happened during the last few years — I’ve gained a much keener sense of the fragility of life, as well as a deepened sense of gratitude for the people dear to me, even those who are gone. On my runs to the park, my route takes me past a grand old cemetery, and strangely, I draw a great deal of comfort from that. I pass the headstones and think, One day, I will join you there, but that day has yet to come. Plenty of time left to do stupid things.

The final, inevitable question: What’s next for you?

I have a long, book-length essay that I’ve been working on for a while, but after the grueling marathon of writing “Appendix,” I’d prefer to run sprints for a while! There’s a kind of elegance to the short form that I really enjoy and would like to revisit. I have plenty of stories to tell.

An Interview with Francesca Segal

In her latest work, the novelist tackles the complexity of blended families