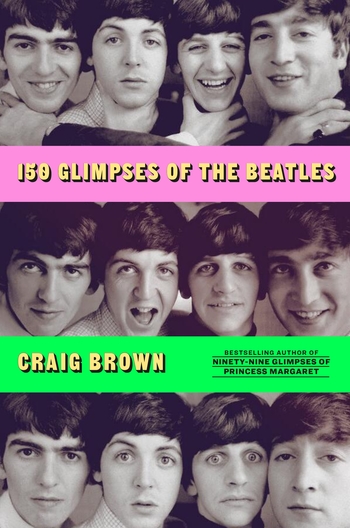 Glimpses, like first impressions, can leave outsized and long-lasting imprints on how we view people, places, and things. In his interesting and eclectic 150 Glimpses of the Beatles, author Craig Brown has a very broad, at times confusing, conception of the term.

At his best, Brown has pulled together a wide swath of telling observations regarding the Fab Four. Particularly satisfying are his sections on how the lads from Liverpool arrived just when America needed them most: a few months after the tragic and shocking November 22, 1963, killing of John F. Kennedy.

“In many people’s minds, the two events...will always be linked: the assassination of JFK was winter; the Beatles are spring,” Brown writes.

A stunned and beleaguered American populace instinctively craved a jolt of optimism and, via their joyful music, witty press conferences, and energetic live performances, John, Paul, George, and Ringo were the perfect prescription.

Well, the younger generation enjoyed the medicine, anyway. On balance, those over 30 were less than thrilled. Playwright and songwriter Noel Coward, representing the upper-crust old guard, said the Beatles were “totally devoid of talent.” After their historic first appearance on “The Ed Sullivan Show” on February 9, 1964, the New York Herald Tribune pronounced the band “75 percent publicity, 20 percent haircut, and five percent lilting lament.’”

However, not all old fogeys were so square, as Brown recounts. John Updike compared the Fabs to “the sun coming up on Easter Morning.” Composer Leonard Bernstein later sang the praises of the monumental LP “Sgt. Pepper’s Lonely Hearts Club Band.”

Among other vignettes, I loved Brown’s “Glimpse 56,” focusing on a minor figure in Beatles history: one Jimmy Nicol, who sat in for a few days on drums to replace an ailing Ringo Starr during a 1964 tour. Plucked from relative obscurity, Nicol hoped the short foray into fame would catapult his career. Suffice it to say, things didn’t work out well for Nicol, who was last seen making a brief appearance at a record convention in Utrecht in 2011 following a string of musical and cinematic failures and a stretch as a builder.

On one’s Beatles bookshelf, Brown’s work belongs among the high-brow, personality-driven tomes and less at the songwriting and musical analysis end of the pile. To wit: Nicol’s stint with the band is likened to “an unnamed clergymen” who puts in a brief appearance in James Boswell’s The Life of Samuel Johnson.

There are a few “glimpses” that don’t seem to fit with the rest of the book at all. For example, “Glimpse 148” imagines a world where fellow Liverpudlian band Gerry and Pacemakers, and not the Beatles, made it big. It’s a few pages of speculative, alternative-reality fan fiction that interrupts the rhythm of the book. I’m not sure why it made the editor’s final cut.

Brown concludes a few other questionable glimpses with looks at a parallel universe where, for instance, Paul passes a major school test and elects to focus on a career other than music. In another fictive scenario, the author conjures a situation wherein Paul fails to convince George to audition for the band.

Such departures are fine as idle speculation, of course — and are the stuff Beatle nerds have feasted upon at bars and cafés around the world for decades — but Brown’s occasional use of them is more jarring than illuminating.

If Abraham Lincoln is the history-book publishers’ dream subject, the Beatles hold that honor among music-book publishers. It’s understandable, then, that Brown would want to differentiate his volume from the approximately 8,594 others on the band. He aims high, and when the book works, the result is fun reading for fans of all levels.

However, less is sometimes more, even when it comes to the Beatles. We might have had a stronger effort here if it were, say, 120 Glimpses of the Beatles. Still, if I were a judge on “Juke Box Jury,” I’d give Craig Brown’s book three-and-a-half stars out of five. It’s got a pretty good beat, and you can dance to it.

Michael Causey is host of Get Up! on WOWD 94.3 FM and takomaradio.org in Takoma Park, Maryland.