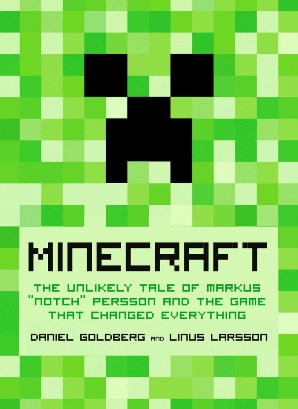 Pity the biographer with a still-living subject. Dead people are a fixed target, the arc of their lives clearly delineated, with friends and colleagues often unafraid to share their true opinions (if they’re not trying to spin their own version of events, of course). Those still alive, by contrast, can actively elude the biographer’s best efforts to capture them in literary amber.

In many instances, that avoidance masquerades as engagement: a cancer-ridden Steve Jobs invites biographer Walter Isaacson into his bedroom, to interview him at his weakest, rather than attempting to block him out. While the resulting biography does its best to appear balanced, all those illness-ridden scenes help blunt the image of the Apple co-founder as a loud, cruel man; one wonders if Jobs intended that result all along.

Markus “Notch” Persson, the Swedish game developer behind the computer game Minecraft, seems to fall into that engage-to-elude category. While it’s difficult to tell from the concluding “Sources” chapter just how much access Persson granted the authors, he obviously deflected any hard-hitting questions about what makes him tick. It’s hard to imagine that the duo, both experienced writers, didn’t press him further on how his messy childhood informed his worldview, or the duality that clearly exists between his insular, creative self and his very corporate ambition to form a gaming behemoth on the scale of Valve. (In a slightly odd twist, Goldberg and Larsson also decided to title their biography after the game that made Persson famous; this is akin to naming the Steve Jobs biography iPhone.)

“Markus is notoriously disinterested in business and economics,” the book explains at one point — only to feature Markus, a few pages later, obsessed with his sales numbers. Similar cases of whiplash appear throughout the story; but instead of resolving them, the authors choose to devote still more paragraphs to Persson’s obsessive love of game engineering.

Ultimately the narrative cookie-cutters Persson, a potentially complex and complicated subject, into “Yet Another Game Designer” — and there are already many of those in the world, the vast majority of whom haven’t been so lucky as to create a game that generates tens of millions of dollars in revenue each year. Goldberg and Larsson do a fantastic job of delineating the Swedish gaming industry, including its “indie” elements, and describe the burgeoning popularity of the Minecraft game with crystal clarity. (For those not tuned into the gaming world, Minecraft allows the player not only to navigate an environment composed of small blocks, but also to use those blocks to build elaborate structures — experts have built some truly impressive things.) Throughout it all, though, Persson himself remains a cypher: the text presents a lot of personality traits (liked Legos as a kid, hates the idea of bosses controlling his work, feels that wealth hasn’t changed him) while skipping out on the psychological nuance.

In many ways, that’s not the authors’ fault: it can be a fool’s errand to shine a light into a creative person’s head, in search of his or her inspiration — who truly knows how our own minds work? But if Goldberg and Larsson had attempted more of a spelunking expedition — whatever the eventual effect — it might have resulted in a more comprehensive book. Instead, the text gets meaty only when it delves into the details of what made Minecraft a word-of-mouth success with gamers, while Persson remains more of a blank.

Nick Kolakowski is an editor at Slashdot. His work has appeared in the Washington Post, McSweeney’s, the Evergreen Review, Satellite Magazine, Carrier Pigeon, and Washington City Paper. His first book, a work of comedic nonfiction titled How to Become an Intellectual, was published by Adams Media in 2012.

The Plague of War: Athens, Sparta, and the Struggle for Ancient Greece