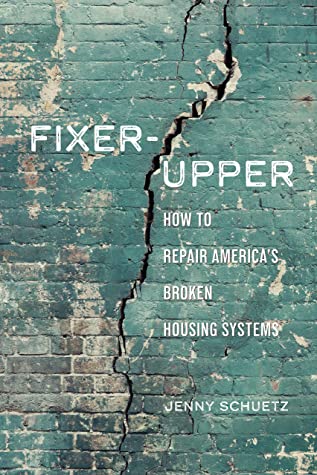 In 2014, when Ta-Nehisi Coates wrote his powerful essay on the necessity of reparations for descendants of slaves, he used predatory housing practices as a centerpiece of his argument. Decades after slavery was abolished, housing policy became the tool of Black subjugation in America. The federal push to increase homeownership that started in the 1930s with the New Deal resulted in homogenous subdivisions, localized land-use control, and middle-class wealth that, taken together, also brought further segregation, environmental damage, and inequality.

Brookings Institution scholar Jenny Schuetz offers a slim and straightforward primer in Fixer-Upper that draws out the stem from those roots. The book arrives at a time when pro-housing and anti-building advocates are fighting pitched battles in practically every major metro area in the country. Politicians in particular should read it if they want to understand the history of America’s broken housing system.

Not that they will. As the author herself declares:

“The main obstacle to better housing outcomes in not lack of knowledge about policy recommendations…These are not technical problems for city planners and real-estate developers, or theoretical conundrums for academics. Fundamentally, they are political choices that weigh up competing claims between different constituencies.”

Schuetz marshals three main arguments for the necessity of new housing policy. First, the laws of supply and demand apply as much to housing as to other markets. Yet since the mid-20th century, the housing market has been tightly controlled by local governments that use their authority to limit the building of new homes in well-established and infrastructure-rich inner suburbs. (Think wide-lawned neighborhoods full of single-family homes, which favor the rich, versus multi-unit apartment buildings accessible to the poor.) As Schuetz notes, if housing is to be affordable to more people, existing land must accommodate more people. Unfortunately, this is the very thing zoning laws are used to prevent.

While it’s true the federal government has long facilitated homeownership via the backing of mortgages and tax breaks on mortgage interest, the growing demand for, and limited supply of, housing in inner suburbs has led to skyrocketing home prices and the virtual shutting out of millennials, immigrants, and minorities from the market.

The second reason new policy is needed, says the author, is that the unaffordability — rooted in land unavailability — of close-in housing has fueled sprawl, the emergence of exurbs, and an even greater dependence on cars (with their environmentally disastrous carbon emissions). While denser housing in cities and inner suburbs would surely reduce per-capita emissions by slowing down exurban growth, cutting commute times, and making mass transit more viable, longtime owners of inner-suburb homes often use their own conservationist arguments to prevent new construction in their neighborhoods.

Even in progressive jurisdictions, older homeowners in close-in suburbs have fought tooth and nail against new housing. Ultra-liberal Takoma Park in the Maryland suburbs of Washington, DC, for example, has not added new homes for decades. There, as elsewhere, residents see developers as interested only in raising, not lowering, housing costs by building new luxury homes. To them, the lack of affordable housing is rooted in developers’ greed and not, as Schuetz asserts, in local governments’ wielding of zoning rules to limit supply.

The author’s third reason for wanting new housing policy is that the groups most hurt by the lack of affordable dwellings continue to be minorities and those new to the housing market. Whereas redlining and covenants once prevented Black homeownership in white suburbs, exclusion is now achieved through high housing costs and infrastructure-hoarding, especially vis-à-vis access to downtown jobs and good schools.

The latter has long been a lightning-rod issue. Residents of wealthy inner suburbs pay high taxes to support good schools, which are attended by children whose parents can capitalize on the education they provide and continue to grow family wealth. The mostly white winners of past housing and transportation policies have made their descendants permanent holders of privilege.

Schuetz’s solution to our broken housing system is, among other things, federal and state preemption of local zoning laws, and she finds growing support for new policy — if not this specific remedy — at the national level. The Biden Administration, in fact, recently announced new policies to increase housing supply and help with the financing of manufactured housing, accessory dwelling units, and multifamily buildings. Due to its size and breadth, federal transportation and infrastructure funding could be the tool that ultimately pries open local zoning.

Schuetz finds hope in the fact that housing politics has not yet broken down along partisan lines, although Donald Trump, in 2020, did accuse Joe Biden of wanting to destroy the suburbs. While housing-policy polarization could very well be coming, it’s unclear if such division would push suburban Democrats to vote for Trump or, conversely, to take up the call for fairer housing policies as a new civil-rights rallying cry. Either way, polarization could very well mean an extended period of split tickets in which conservatives win local office, while housing-friendly liberals prevail at the federal level, an outcome likely to produce more stasis and further erode Americans’ faith in government.

In the end, Schuetz does not fully answer the question at the heart of her book: How do we repair America’s broken housing systems? Nor does Fixer-Upper identify the constituents of a new coalition that could pursue widespread policy reform or demand federal action. But the book could very well secure her role as housing czar in a Democratic administration committed to finding — or, at the very least, trying to find — some solutions.

By Rob Sand with Reid Forgrave