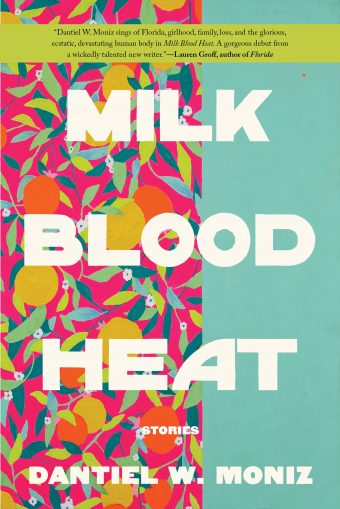 In the title story of Dantiel W. Moniz’s debut collection, Milk Blood Heat, two teenage best friends decide to become blood sisters. They mix their blood together in a bowl of milk that they then take turns drinking from because, as one of them says, “Pink is the color for girls.”

Kiera, who is white, and Ava, who is Black, are both 13. They are immersed in the delirium of early female adolescence, that moment when all the boundaries of childhood are breaking down and nothing has arrived yet to replace them, when the vividness and intensity of the world seem overwhelming.

Of course, close as they are, they don’t get to experience this passage in the same way. Kiera’s mother encourages her to “explore her feelings” and believes in “freedom of expression.” Ava’s mother is more wary, understanding in a way the other characters do not that there is real danger in this moment for the girls. The sense of limitless freedom they experience in one another’s company might come with serious and lasting consequences.

As the reader dreads, she is correct. But not in any way you might anticipate.

This story, which appears first, introduces many of the themes that animate this powerful collection. Perhaps the most significant of these is the problem of boundaries: physical, psychological, emotional, and geographic. Again and again, characters in these tales, mainly young women and girls, are confronted with questions about where they end and the rest of the world begins; who or what to let in or push away.

The answers are never simple. In “Feast,” protagonist Rayna has suffered a miscarriage. She is haunted by visions of baby body parts that appear in unexpected places. She knows these are hallucinations and that the ongoing intensity of her grief is gradually estranging her from her husband. But they are all she has left of the child she lost, and she can’t bring herself to let them go.

Meanwhile, in “Necessary Bodies,” Billie, a freelance journalist, contemplates whether to continue a pregnancy she isn’t sure she wants, despite having a husband she loves and a marginally stable life. “Surely,” she thinks, “not everyone was meant to be a mother — not in this conventional sense — and what would the world be now if women had been allowed more freedom to wonder?”

Then, in the final story, “An Almanac of Bones,” we get an example of the kind of parent Billie might fear becoming. The narrator, Sylvie, has been left by her free-spirited mother, Helen, in her grandmother’s care so Helen can travel the world. Sylvie wants to be angry, to resent her mother for leaving. But she also recognizes that her mother cannot dismiss her own nature.

Rather than simplistically celebrating either independence or connection, these stories show how each person must work out the right balance. And then, of course, especially for women of color, self-definition is always only partially a personal choice. Some part of how you are viewed — and get to view yourself — is already determined.

Throughout, Moniz’s prose is gorgeous and richly descriptive, as well as funny and acerbic in places. She uses these qualities to, among other things, evoke Jacksonville, Florida, and surroundings, where heat and water are ever present. The lushness and intensity of the environment infuse the stories and present another kind of unstable boundary, that between land and water. It’s one that many of the characters know will only grow more unstable over time.

For all their sensory and visceral intensity, though, the stories never go for melodrama. They take their time and swerve in unexpected directions. Taken together, they are also coolly analytical. It’s a remarkable, deeply effective combination.

Arriving as it does after a year of pandemic-induced sensory and social deprivation, Milk Blood Heat is especially compelling and welcome. I experienced my time in the vividness of these fictional worlds as an acute relief. Ultimately, it’s difficult to picture the reader who won’t relish the journey these stories induce.