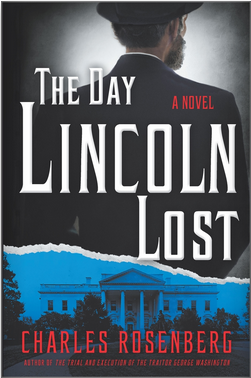 Charles Rosenberg’s alternate-history novel The Day Lincoln Lost re-imagines Abe’s ascension to the presidency by giving it an historical twist: What if outgoing chief executive James Buchanan had used his influence to set Lincoln up to fail?

Rosenberg says he enjoys considering and writing alternate-reality narratives because it allows him, and readers, to explore and consider issues surrounding the time periods involved. Lincoln — the “crude westerner” — was already a longshot in the 1860 presidential election. But what if his candidacy were even more precarious because of sabotage?

Slavery is at the heart of the election, and the author weaves his tale around its abolition. President Buchanan is an “apologist for slavery,” even though he’s never owned slaves himself and has condemned the institution. But he has also “supported the Fugitive Slave Act — which returned escaped slaves to their owners — praised the Dred Scott decision which held that no Negro, whether free or slave, is a citizen, and attempted to bring Kansas into the Union as a slave state.”

The four top presidential candidates that year hold various positions on slavery. Three are amenable to it: Vice President John C. Breckinridge has owned slaves; Senator Stephen Douglas introduced a congressional act permitting people to vote on allowing slavery; and John Bell of the Constitutional Union Party campaigns on the idea that slavery isn’t a relevant issue. The only candidate who might condemn the peculiar institution is Lincoln.

Because Lincoln knows that reformers are rarely popular and publicly professes few opinions about slavery, he will rely on “votes from Republicans who oppose slavery but don’t want to ‘blow up the Union over the issue’ and Democrats who don’t care about slavery but are fed up with the corruption of the Buchanan administration.”

But Lincoln’s hesitancy to proclaim himself an abolitionist is pushed to the edge — and his candidacy is jeopardized — when protests break out after an escaped slave girl is captured and returned to her owner in Lincoln’s hometown of Springfield, Illinois.

Lucy Battelle has been enslaved on the Riverview Plantation in Kentucky for all 12 years of her life. But during a trip to a slave auction in Mississippi, she flees in search of the Underground Railroad and ultimate freedom in Canada. Her quest sets in motion a chain of events that threatens to alter the course of history.

Although Illinois is a “free state,” the Fugitive Slave Act mandates the return of captured slaves. On the same day Lucy is returned, Quaker abolitionist Abby Kelley Foster presents a lecture in Springfield calling for the end of slavery. Soon after, an angry crowd frees Lucy.

President Buchanan uses these developments to his advantage, ordering Abby’s arrest for inciting violence. Lincoln is then pressured to take a stand on abolition, risking the alienation of some voters if he does the “moral thing,” and anger from others if he doesn’t.

Meanwhile, Lincoln hires the Pinkerton National Detective Agency to investigate the riot that freed Lucy. Allan Pinkerton assigns Detective Annabelle Carter to piece together what happened and to find the now-missing slave. The investigation into Lucy’s disappearance, as well as Abby’s trial that follows, provides an intriguing answer to the question: What if history had been different?

Rosenberg is an attorney practicing in the Los Angeles area, an adjunct law professor at Loyola, and a consultant for some of TV’s most popular legal dramas. In his author’s note, he provides readers with the facts about the major players portrayed in the novel, all of whom had a role in shaping history.

The inclusion of both real-life occurrences and “what if?” conjecture makes for intriguing reading about our nation’s past. Those not well-versed in the events of 1860 and history buffs alike will enjoy this fictional journey into one of our nation’s most pivotal moments: the reckoning of the moral battle between North and South.

The Illness Lesson: A Novel