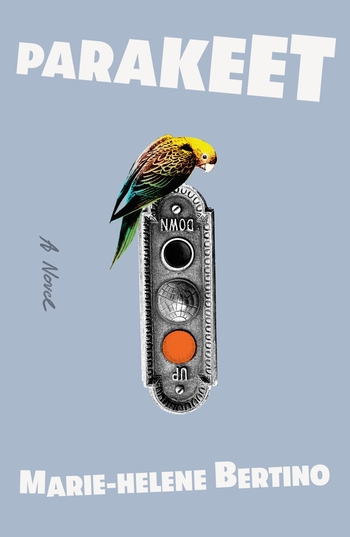 At first, Parakeet seems to be the story of an everyday American woman uncertain of her own wants and needs, conforming to society’s expectations by committing to a marriage she admits she does not desire.

Still, the young woman, referred to only as the Bride, is determined to follow through with the wedding, desperate for normalcy. All she needs to do is endure one week of finalizing plans, marry the Groom, and live out the rest of her life.

During that week, however, chaos throws the Bride into disarray. Her departed, cynical-in-life grandmother visits her in the form of a sharp-tongued parakeet and presents the Bride with a series of messages: bird poop on her wedding dress, an order to go find her estranged brother, Tom, and a threat warning her of the consequences of disobeying her grandmother:

“If you can’t respect a dead woman’s wishes you’re a disgrace. Mark my words. If you defy me, shit’s going to get fucked up. After it gets fucked up, it’s gonna stay fucked up. And after you can no longer bear it, it’s gonna get more fucked up. The things you do to make it less fucked up are going to fuck it up even more.”

Shortly after this avian visit, the story devolves into a chaotic series of dreamlike events unbound from the rules of chronology and reality. Mystery shrouds every major thought and act. Then there is the aloof Groom, a famous sibling, and the traumatic accident that drove the Bride and her brother apart years ago.

The Bride soon finds that Tom no longer exists; discovers a potential alternate-reality version of herself; temporarily inhabits her mother’s body; and, in a concussive dream, meets an Internet-savvy reptile. Each of these happenings pushes her further along her journey to self-realization. Every “shift leads to another as you make room for yourself again and again. I readjusted several times over the course of years to allow myself to arrive.”

There are moments when the Bride’s cynicism, sarcasm, and narcissism make her almost unbearable, yet she remains relatable and real. Her negative coping mechanisms provide an ugly authenticity to her character and are somewhat balanced out by her overactive, dark sense of humor.

Even within these magical moments, the Bride’s experiences mirror the reality of many women today. She reflects on dating “a married man whose cruelty had put me in bed for months.” Her longtime friend Rose acknowledges that “nice girls don’t get the corner office” and “a less deserving man gets ahead for no reason.”

The Bride’s story also demonstrates the complexities of adult life, from knowing when and how to maintain or abandon relationships to validating and prioritizing one’s own needs and wants. Her bond with Rose is not what it once was, and despite constantly making excuses, the Bride eventually recognizes that their true friendship ended long ago.

More subtly, the book acknowledges the struggles for people of color in America. The Bride, an ethnically ambiguous brown woman, once fondly remembered how Rose never bullied her for the color of her skin as their peers did. But, in adulthood, she realizes that “even though she never joined the girls who made fun of my skin color, she never intervened.”

The bride’s white mother-in-law-to-be, in a fit of rage, gives free rein to her own racism and xenophobia: “You are a terrible person. And I always knew it. Disgusting. Brown gypsy scarper. There’s something wrong with you. I knew the second I met you.”

Author Marie-Helene Bertino manages to tackle several important and relevant issues in Parakeet without preaching to the reader. At the same time, she effectively weaves together complex timelines, dark humor, and sometimes too-strange coincidences into a tale of healing, intimacy, and womanhood.

Zoe Hwang is a student at UMBC and the Independent’s editorial intern.