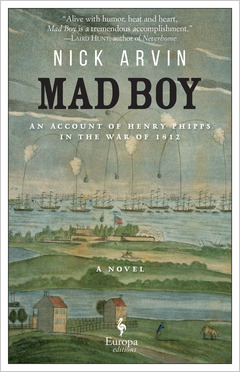 We’re told on the first page of Mad Boy that Henry Phipps, the boy of the title, is 10 years old and that he’s running because he thinks his brother, Franklin, has been executed as a deserter from the U.S. Army in Bladensburg, Maryland, in 1814. From that moment forward, he never stops moving and, like Ulysses, his goal seems to move from him as he flees toward it.

Make no mistake, Henry’s is a hard-luck story. His father is in debtor’s prison. His mother is a ghost who wants Henry to reunite the family in order to give her a proper burial at sea. Driven by internal obligation, Henry must free his father and make his mother happy. A no-win proposition, but a salient device for fevered plotting.

It is possible that Henry’s biological father is not the improvident wastrel he’s grown up with (whose luck has to turn soon), but the exploitative, murderously successful businessman, Suthers. In his loot-wandering, Henry finds his brother alive on the battlefield. (He had been mock-executed — his crime was going to see his pregnant fiancée.) The fiancée is Suthers’ daughter and the owner of the property on which the profligate Phipps family lives.

Yes, consanguine Southern-ness plays its part in this story.

Henry is at the burning of the White House and he witnesses the overnight bombing of Ft. McHenry. He is a looter who never gathers any loot, but he does gain adventure with a coterie of singular characters all undergoing upheaval in tumultuous times. The story is a document of what war is, the destruction of law, the claim that “might is right” made manifest. Henry learns to use his experiences to his own benefit.

He ranges from Alexandria to Baltimore, through DC and Bladensburg (twice). Like Huck Finn, the most decent people Henry meets are enslaved. But in his transactional world, he can’t trust anybody, and he ends up ransoming his newborn niece to those same slaves in order to fulfill his impossible desires.

Morley, a recurring character, the ugliest person you ever saw, is a British soldier whom Henry partially saves from the lash, and who keeps the plot roaring forward in every scene he steals. Reminding me of the movie “It’s a Mad, Mad, Mad, Mad World,” Morley swaggers into each moment suspended like the Road Runner from the laws of gravity over the chasm of his lost causes. His denouement is only partly fitting.

With little reason to try to keep up with Henry’s headlong pace, the reader will undoubtedly ask the question, “How old is this kid?” He’s 10. But then, he’s 10 in a lawless, agrarian, wooden technology state, essentially orphaned and made to shift on his own. Suspension of disbelief was my answer to this dilemma.

Maybe a kid with so much propulsion, back in the era of the Virginia dynasty of presidents, might actually be able to say, “Don’t be stupid. They’ll set up the firing squad and really shoot you.” This in response to his brother, who suggests joining him on a journey to Baltimore.

Or when Henry is negotiating with the hidden slaves to free his niece with the money he is out to recover from Suthers, and one of the slaves says, “Now you threaten us.” Henry replies, “I didn’t start the threatening.”

Interestingly, the ghostly mother’s voice, which haunts Henry throughout, begins to fade toward the end of the book. He’s crossed so many moral boundaries in his quest to do her bidding that Henry can no longer hear her. By the time the plot nears resolution, Henry really doesn’t know what is right or wrong anymore. And in a state of war, that is precisely the case. There is no wrong or right: There is only survival.

That’s where Henry is at in his denouement. The people of Maryland are already singing that repurposed German beer-hall song about the star-spangled banner, and Henry has fulfilled his mother’s wishes. He concludes that it doesn’t matter who his father is: He is determined to make it on his own in the Ohio Valley.

Ultimately, Mad Boy is the story of why a young man in the earliest days of the United States would go west. There must have been thousands of little Henry Phipps-types around the DC area in 1814, with little reason to stay and every reason to run.

Nick Arvin has written a page-turner that stands up to scrutiny. There are no Freudian psycho-analytics, but he paints the picture of an America that is not conducive to reasoned consideration. If it’s a little cartoonish and over-extended, it is nonetheless an entertaining novel that will make the reader wonder, “Who is mad in a world at war?”