Machines of Loving Grace: The Quest for Common Ground between Humans and Robots 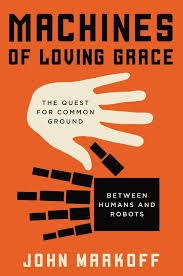 A recent article in the Guardian describes a fascinating project called Poetry for Robots, which is attempting to discover whether a search engine such as Google can learn to understand metaphor and symbolism.

Researchers posit that if computers were able to view the world with a poetic mind (that is, one that recognizes patterns and likenesses as well as literality and logic), they could interact with us more naturally, with a more human sensibility. And we, in turn, would be less likely to be influenced — even unconsciously — to become more linear and less empathetic in our thinking.

Whether we humans are truly benefitting from our ever-evolving relationship with high-level computer technology is an issue at the heart of John Markoff’s compelling Machines of Loving Grace. This comprehensive history of the development of artificialintelligence (AI) raises many thought-provoking issues.

As robotic technology becomes cheaper, more pervasive, and acts more and more independently, “The line between what is human and who is machine begins to blur,” Markoff points out. And in a world where driverless cars, pocket personal assistants such as Apple’s Siri, and the supercomputer worn as a headset that is Google Glass are rapidly seen as unexceptional, the ultimate question becomes: Are we truly in control of these sophisticated systems? Or will they eventually control us?

It turns out that even very early developers were divided on the question of how AI would influence our lives. Markoff opens the discussion by describing a robot called Shakey, designed in the 1960s at the Stanford Research Institute. Shakey, a six-foot-tall stack of electronics equipped with wheels and connected to a mainframe computer, “was intended to reason about the world around it, plan its own actions, and perform tasks.”

Although the robot never achieved the autonomy his creators envisioned, their goal was for beings like him to help humans by making systems more efficient and taking over burdensome tasks.

During the same period, another group of researchers at the Stanford Artificial Intelligence Laboratory was pursuing a different vision. Dubbed IA (for “intelligence augmentation”), the team was most interested in facilitating collaboration between highly skilled and creative scientists, in the process creating a “‘collective IQ’ that outstripped the capabilities of any single individual.”

Even early on, some scientists realized that taking technology in a superhuman direction might result in autonomous machines with unpredictable potentialities. “We must face the fact that every degree of independence we give the machine is a degree of possible defiance of our wishes,” wrote Norbert Weiner, a mathematician and philosopher based at MIT, in his 1949 book, Cybernetics.

Markoff’s chronicle highlights many fascinating milestones in AI, from these earliest developers to today’s dramatic, accelerating advancements by corporations such as Apple and Google and researchers in Silicon Valley and the growing East Coast tech corridor.

They include an ingenious Pentagon-sponsored contest to create driverless vehicles, designed to attract “computer hackers, college professors, and publicity-seeking corporations to innovate where the military had failed”; workplace automation in white-collar industries such as banking and the legal profession; and the ways AI could help solve some of our most difficult societal problems, such as providing quality care for our elderly.

But in all of these scenarios, Markoff juxtaposes questions of personal responsibility, choice, and consequences. Robots can enhance our lives in wonderful ways both large and small. The greater changes are easier to notice: Most of us probably have some opinion about drones used in wartime, for instance, and we are aware of economic shifts as industrial automation impacts the type and number of jobs performed by humans. But we may be less conscious of how navigational systems and personal assistants may be changing our ability to remember, reason spatially, and make decisions.

Markoff writes, “As one of the engineers who is building next-generation robots told me when I asked about the impact of automation on people: ‘You can’t think about that; youjust have to decide that you are going to do the best you can to improve the world for humanity as a whole.’”

Machines of Loving Grace gives you the idea that not only AI developers, but we as a society, most definitely should be thinking about that — and sooner rather than later.

Paula Novash writes articles, web copy, and literary nonfiction on topics ranging from IT to sushi and edits books, articles, and journals in fields that include medicine, linguistics, philanthropy, and neuroscience.