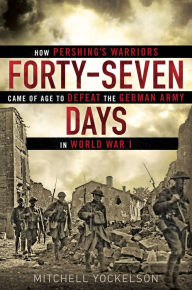 In his 12-page prologue to Forty-Seven Days, Mitchell Yockelson deftly sets the stage for America’s involvement in the Great War, summarizing the course of action on the Western Front. From there, he then capsulizes the biography of the famed commander of America’s Expeditionary Force (AEF), General John J. “Black Jack” Pershing, and his triumph in the Battle of the Argonne Forest.

In May 1918, Pershing was under tremendous pressure by both England and France to put American troops under the control of foreign military leadership. Pershing refused, insisting that the Americans were there to fight under their own flag. As he was to learn later, however, not only were his troops relatively untrained, but so was the U.S. officer corps.

During the six months that the American army fought in France, Pershing was not shy about replacing inadequate or incompetent officers. Results were the only metric by which he judged his officers. At its zenith, the AEF numbered over 1.2 million fighting men.

Yockelson — an investigative archivist with the National Archives, as well as a history instructor at the U.S. Naval Academy and a military-history instructor at Norwich University — supplements his description of the two major battles on the Western Front with asides about the system of organized brothels that held down the incidence of venereal disease; the American air forces under the leadership of Billy Mitchell; the traffic-choked roads south of the battlefield; the importance of cigarettes to the success of the American army; and an explanation of the hospital system supporting the front-line troops (and the impact of the flu epidemic on the operations thereof). We are also introduced to such future luminaries as Douglas MacArthur, “Wild Bill” Donovan (later head of the Office of Strategic Services in the next war), and Capt. Harry S. Truman.

As events unfolded, Pershing agreed to a compromise with French Marshal Pétain; instead of American troops fighting under French control, they would attack the Germans at the St. Mihiel Salient, which France had not been able to take in three years. Using plans drawn up by Pershing’s chief planner, George C. Marshall, the AEF captured the salient in five days with fewer than 7,000 casualties.

After a mere two-week rest, Pershing then directed the AEF to attack the Meuse-Argonne area held by over 27 German divisions along the famous Hindenburg Line. This battle involved more U.S. troops than any other battle in American history up to that time, including Gettysburg (with roughly 1.2 million). The battle lasted 47 days until the Armistice; hence, the book’s title.

In the first 13 days of the battle, the American First Army suffered 75,000 casualties. By Armistice Day, that figure had reached 120,000. After two strenuous weeks of fighting, Pershing halted the advances to reorganize his army. The French leader Foch had intimated that poor planning would result in more casualties and lack of progress.

Pershing had been wearing two hats as head of the AEF and commander of the First Army. He eventually gave command of the latter to Lt. General Hunter Liggett and created a Second Army under Lt. General Robert Lee Bullard. Once the second phase of the attack was resumed, the leading 5th Division was decimated, since the Germans had newly created three levels of defenses. The most famous incident of the battle was the plight of the Lost Battalion in the thick Argonne Forest, where several companies were completely surrounded by Germans for over six days before being rescued.

The battle occurred simultaneously with the 1918 worldwide influenza epidemic. In mid-October, 150,000 soldiers had the flu, and the entire army had between 750,000 and 1 million cases during its time on the Continent. The Germans reportedly lost 186,000 due to the flu. The bleeding wrought from the despondent Germans helped bring about the long-sought Armistice.

For students of history and followers of the United States’ military, Yockelson’s book — which also includes informative maps and follow-up accounts of notable participants’ lives in the war’s aftermath — is a must-read. In fact, it is for everyone, since most Americans know very little about our country’s actions in World War I. This volume is an easy way to get caught up.

Gary Knight has been a writer and tutor for 16 years, following a 26-year career in lobbying and politics. He served three terms on the Falls Church, VA, City Council. He graduated from the U.S. Naval Academy and has a graduate degree from the American University. He is the author of Forgotten Brothers, an historical novel about the Pinzon brothers, who ensured the success of Columbus’ first voyage, and How to Treat a Woman, which helps successful professionals achieve meaningful relationships with high-caliber women.