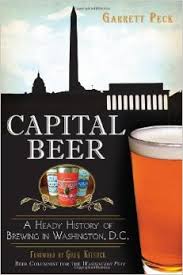 South of Dupont Circle in Washington, D.C., among the concrete office and apartment buildings, sits a proud, incongruent mansion. Four stories of red sandstone ornamented with a turret, the massive house is labeled with a mysterious sign: The Brewmaster’s Castle. Although the place sounds like something out of a dark fairy tale, Christian Heurich’s family home is instead a testament to the great wealth that beer generated, once upon a time.

Heurich (pronounced HI-rick) wasn’t the beginning of Washington’s storied beer history. Garrett Peck’s research pins that honor upon a brewery that is, today, outside the city limits — in Alexandria, Virginia, which once formed part of our nation’s capital. The Wales Brewery opened sometime around 1770 and operated for over 30 years. From that starting point, Peck takes us on a tour through the many breweries that operated within D.C.’s historical boundaries (including modern-day Alexandria and Rosslyn). By the time Heurich was earning his fortune in the early twentieth century, the brewing industry was the District’s second largest employer, after the federal government.

But Prohibition, fruit of the long-running temperance movement, brought everything to a halt in 1916 (when Virginia went dry) and 1917 (when the District followed). Some breweries tried to make ends meet by shifting to sodas and beers with negligible alcohol, but for most, those ventures failed. Over 250 licensed bars and saloons closed in D.C., and although as many as three thousand speakeasies opened in their place, bootleggers made more money with whiskey and gin. Washingtonian tastes shifted towards cocktails.

That change in drinking fashion outlasted Prohibition, even though beer was the first alcoholic beverage legalized, following a campaign promise from Franklin Delano Roosevelt in 1932. Only two of Washington’s six pre-Prohibition breweries reopened, including Heurich’s massive facility in Foggy Bottom. (The man was, by that point, 91 years old, and he would live for more than another decade.) Over the coming years, local beer gave way to the massive national beer brands selling mass-produced light lager, and Heurich’s brewery was demolished in 1962 to make way for what would become the John F. Kennedy Center for the Performing Arts.

But Peck’s tale has a happy ending for D.C. beer lovers. In 2011, Port City Brewing Company opened its doors in Alexandria, and a slew of other craft brewers followed, resulting in over 10 breweries and brewpubs in D.C. by early 2014. Although modern day capacity doesn’t come close to the 250,000 barrels per year brewed before Prohibition, the breadth of selection and creativity today perhaps make up for it. Peck concludes his book with a survey of local breweries and interviews with their (often colorful) brewmasters.

This is a book of local history and, as in many local surveys, the details often outweigh the narrative. The lack of information on early brewers leaves their stories little more than a recitation of business partnerships, real estate transactions, and estate sales. But Peck’s fastidious research also unearths a delicious sampler of human intrigue. For example, he concludes that lager was first brewed in Washington in 1855, based on records from a murder trial where a witness testified that the suspect had been drinking lager at a brewery’s pleasure garden and then threw his glass at the victim. Such details abound, some more interesting than others. By the time the historical record picks up in the twentieth century, Peck’s story gains steam.

Peck’s tone is chatty and his writing at times inelegant, as if he were regaling you with D.C.’s brewing history over a pint. And just like a garrulous bar companion, that style can, at times, feel grating. After giving an overview of the mid-19th-century National Capital Brewing Company, he writes, “Confused? Let’s recap.” Such conversational writing is a bit too casual for this reader (shouldn’t the story be clear the first time through?), but perhaps I just need to kick back with a glass of porter.

In fact, it’s hard to finish this book and not thirst for a tall cold one, whether it’s one of the “weird shit” brews concocted by Bill Stewart of Bardo, a malt-forward Cornerstone Copper Ale by Chocolate City Beer, or a re-creation of Heurich’s popular beers. For residents and visitors, such satisfaction is now easy to come by, and Peck provides information on visiting both the modern breweries and the gravesites of yesterday’s brewers. Even the Brewmaster’s Castle is open for tours. And perhaps, in these days of political acrimony, a little easygoing beer tourism is just what our capital city needs. For, as Peck writes, “sipping suds with friends over a long, languid conversation” is one of life’s great pleasures.

Carrie
Callaghan is on the editorial board of the Washington Independent Review of Books, and she doesn’t drink nearly enough beer.

A riveting investigation of the Getty Museum’s acquisition practices sheds light on illegal activities in the world of high culture.