Who Are You, Calvin Bledsoe?: A Novel 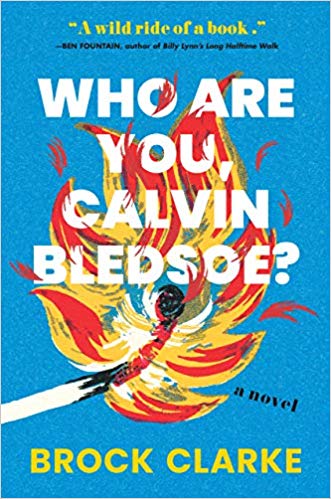 One of the most important elements of a good novel is voice. It sets the tone of the story, gives the reader insight into character, and, in a subtle way, drives the plot. Enter Brock Clarke, whose zany new novel, Who Are You, Calvin Bledsoe?, has an offbeat voice that perfectly fits this offbeat story.

Calvin Bledsoe is a 49-year-old unsuccessful blogger whose mother, “a famous preacher” with “a famous book” about John Calvin, has just died in a horrific accident. Calvin, who is named after the French theologian and has been schooled by his mother in Calvinist doctrine, is in the midst of an unsuccessful divorce with an ex who blogs for the same pellet-stove company as he does.

The blogs, which, apparently, no one reads, serve as a means of communication between the two as Calvin traipses blindly through Europe with his newly discovered aunt.

The story opens at the funeral of Calvin’s mother, where he meets, for the first time, mysterious Aunt Beatrice, who sweeps him off to Stockholm and takes him on a journey that becomes a discovery of self.

A wily woman with a sharp tongue, Beatrice is the antithesis of her well-respected and famous sister, for she is enmeshed, as we soon learn, in a rather seedy lifestyle that includes an unsuccessful marriage to a man involved in human trafficking.

If the word “unsuccessful” keeps popping up, it’s because this is a story filled with unsuccessful marriages and unsuccessful lives, despite a famous mother whose famous book is simply referred to as such; we never do learn its title.

Instead, we learn Calvin’s mother was not the saint he was led to believe, for she slept with Beatrice’s husband, just as Beatrice slept with hers. One of the questions that dogs Calvin is whether Beatrice is actually his mother. The overarching theme of the story might best be summed up as, “How to be successful at being unsuccessful.”

Perhaps all of this is a reflection of the Calvinist philosophy that underlies the book, a philosophy that includes the notion of predestination, for each character is stuck in a disappointing life from which they cannot escape. And though Calvin has divorced his wife to escape an unsuccessful union, even this phase of his life has become unsuccessful, for she stalks him via his blogs and follows him across Europe.

Who Are You, Calvin Bledsoe? is filled with quotes from John Calvin, yet it is less a testament to Calvinism and more a deep inquiry into Calvin Bledsoe’s life. Part of what makes the novel work so well, apart from the inimitable Beatrice, is the wry humor that permeates the story, as in this passage where Dawn, Calvin’s ex, asks him:

“‘Since when do you have an aunt?’

“Since birth, I wanted to say. But I knew from long experience that it was useless to argue with Dawn. Not because I couldn’t win, although I couldn’t, but because Dawn didn’t necessarily want to win either; she just didn’t want the argument to end. She wanted it to go on forever. You’d think that divorce would have put an end to argument, but no.”

Or in one of the many cryptic statements by Beatrice that gives Calvin a shake-up:

“‘It’s time,’ Aunt Beatrice whispered into the ear that wasn’t up against the phone. I assumed my aunt was telling me that it was time to board our flight, and so I told Dawn I had to go, that my flight was boarding, that I’d text her when I got to Stockholm. Then I hung up, looked at the time, and saw that we had at least an hour before boarding. I looked to my aunt for clarification.

And, indeed, this is a story about a middle-aged man who has yet to grow up. A man who has spent his entire life in the same place, a town called Congress. A man who, thanks to his cunning aunt, is forced to examine his lot and, ultimately, accept it.

Who Are You, Calvin Bledsoe? is successful in illuminating lost lives that end up being less unsuccessful than those living them believe. It’s also a fun read by a rather successful author.

Mike Maggio’s newest collection of short fiction, Letters from Inside: The Best of Mike Maggio, will be released by Vine Leaves Press in October.