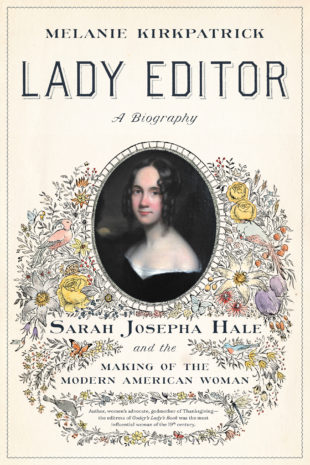 In 1822, when the country was still in its youth, Sarah Josepha Hale had to forge a new life for herself. Raised in New England, the 33-year-old had just been widowed and left with five young children. She put on her widow’s weeds and, in order to make ends meet, picked up her pen. Hale met with great success, becoming not only a novelist but an activist on behalf of women and the editor of two major magazines, Ladies’ Magazine and, later, Godey’s Lady’s Book.

Melanie Kirkpatrick introduces Lady Editor, her biography of Hale, with two bold claims. First, she argues that Hale was a protofeminist who helped create the Modern American Woman (as the book’s subtitle proclaims), suggesting Hale was “one of the most consequential figures in the narrative of American women’s struggle for equality” and even a “prophet” of feminism. Despite her “essential role in shaping the way Americans thought about women in [her] society,” Kirkpatrick argues that Hale has been “all but forgotten in ours.”

Both claims are false.

This is not to say Hale was uninvolved in the effort to increase opportunities for women. Indeed, she wrote many articles championing women’s education in a range of subjects and fields, she supported property rights for some women, and perhaps most importantly, she publicly modeled the role of an independent woman with a strong voice.

Still, there’s an enormous gulf between Hale’s beliefs and the activism of modern women whose feminist values Hale explicitly condemned. Rather than being grounded in the concept of equality, Hale’s arguments for expanded roles for women were based on the ideology of separate spheres.

She believed, for instance, that women were radically different from men. Their distinct role was to serve and care for their families and other people. “WOMAN is God’s appointed agent of morality,” said Hale. The feminine sphere was a moral and spiritual one. Women needed better education primarily so they would be able to raise the next generation in this new nation to be learned and thoughtful.

Women were not, however, designed for professional ambition or equality with men, argued Hale. She feared that any supposedly unfeminine attachment to the world of power and money might endanger a woman’s moral authority within the family. Hale was therefore opposed not only to women working in business-oriented careers but also to the concept of equal pay for equal work, employment outside the home by married women with children, and even women’s suffrage.

Kirkpatrick is also wrong when she suggests that Hale has been ignored or erased by modern historians. In truth, Hale was used as an essential example of the rhetoric of separate spheres and “republican motherhood” in late-20th-century scholarship by Mary Beth Norton, Nancy Cott, Linda Kerber, and especially Nina Baym. Their work could have provided useful historical context for this biography, but the author does not cite them or refer to their work in any significant way.

There have also been full-length biographies of Hale — some which the author finally acknowledges in her afterword (“Sarah Who?”) and others which she names in the book’s penultimate footnote. There have even been recent books aimed at young readers emphasizing Hale’s work as a female writer and editor.

What Kirkpatrick seems to mean when she writes that Hale has been ignored is simply that Hale has not been appreciated as a protofeminist. She argues, for example, that “incredibly, and shamefully, Hale has yet to be elected to the National Women’s Hall of Fame in Seneca Falls.”

While Kirkpatrick believes “Hale’s ideas about women’s special obligations to family, their moral leadership, and how they should live useful lives remains relevant,” it won’t be hard for readers to understand why Hale’s active opposition to suffrage and her vocal rejection of equal pay for the majority of women might give pause to the judges determining whom to honor in the hall of fame.

Despite the author’s disingenuous claims about why her subject is worthy of a biography, Lady Editor lays out two alternative reasons why Sarah Josepha Hale was both important and interesting. First, Hale’s belief in cultural nationalism — that is, her interest in the development of a distinctly American culture different from Britain’s — led her to support American authors in the pages of her magazines.

A second reason Hale is a worthy historical subject is intertwined with her interest in creating an American culture: She was an outspoken advocate for the idea of broad national unity. To that end, she worked for decades to ensure that all states not only celebrated Thanksgiving but did so on the same date.

Hale might have been drawn to Thanksgiving because of its links to the feminine sphere of nurturing family with food, or even its quasi-religious morality. In addition, she believed a festival of patriotism would encourage Americans to separate themselves from any foreign roots and pledge allegiance to their fairly new homeland.

Over the years, Hale realized the unifying power Thanksgiving might have over people across America, despite the significant cultural and economic differences between the states. Her efforts strengthened as dissension flared between North and South over the issue of slavery. Early in her writing career, Hale had expressed abolitionist sentiments, as well as support of a movement to resettle the nation’s enslaved population in Africa (rather than grant them American citizenship).

But surprisingly, after the early 1850s, Hale never again wrote about slavery, despite her belief that women had a special responsibility to speak out on issues of morality. Inspired by that same belief in distinct gender roles, several other 19th-century women did indeed become leaders in the abolitionist movement. Hale, for her part, chose not to participate.

Instead, as Kirkpatrick outlines in her strongest chapter, Hale refrained from uttering any clear statement against slavery. It’s possible she didn’t want to offend white Southern readers of Godey’s Lady’s Book; subscribers accounted for a substantial percentage of the paper’s profits. Or maybe she merely accepted her publisher’s restriction on political speech.

Whatever her reasons, Hale's actions suggested that she cared more about harmony than justice. For her, as Kirkpatrick explains, “the preservation of the Union was the supreme priority.” She not only wished but believed — “unrealistically,” as her biographer points out — that the nation’s leaders would conquer their differences and “come together for the sake of unity.”

Hale’s reticence to use her national platform to address the most important issue of the day doesn’t make her any less interesting as the subject of a biography. In fact, the way she negotiated the zeitgeist might actually make her more intriguing. By looking past Kirkpatrick’s simple story of a supposedly feminist foremother, we can see the shadow of a complex human being who sometimes struggled to find her moral compass in a complicated, changing world. Perhaps that more than anything makes her look something like a modern American woman.

Hannah Joyner is a freelance critic and an independent historian who lives in Takoma Park, MD. Her academic publications include Unspeakable: The Story of Junius Wilson (with Susan Burch) and From Pity to Pride: Growing Up Deaf in the Old South. She is an editor at the online book review journal Open Letters Review. You can find more of her bookish conversations on her YouTube channel, Hannah’s Books.