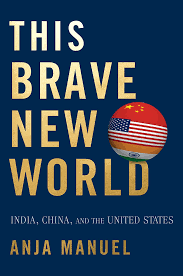 "O brave new world, that has such people in't!"

The character who speaks these words in The Tempest is Miranda, a young woman who has lived all her life on a remote island and now encounters Europeans from her ancestral land. When Aldous Huxley used the quote in his famous dystopian novel, he gave it to the character John, a young man reared outside the ruling society of his age.

In each case, the irony is that the "brave new world" in question is actually an old world encountered by a young hero or heroine who brings to it a new perspective. It is not the world itself that holds forth promise and novelty, but a naïve and youthful point of view.

Anja Manuel quotes both works in her new book about China and India. She has adopted the phrase "brave new world" for her title. Fittingly, but perhaps unwittingly, she also uses it to refer to an old world: in this case, the world of global accords and interdependencies, shakily founded in Western liberal values, that has now prevailed for over half a century.

Manuel hopes this regime can be adapted to accommodate the rise of two great Eastern powers. Whether it deserves to be so adapted is not a question she considers.

Her book is broken into three sections, roughly corresponding to the past, the present, and the future. Part 1 begins with a refresher in Chinese and Indian history. It could have been subtitled "All that stuff you sort of remember from high school." Manuel sticks to the salient points: Confucius, the Ming dynasty, Mao, the Great Leap Forward, Hinduism, the Mughals, Gandhi, India's partition, the Nehru clan. Her mini bios of the countries' current leaders, Li Keqiang and Narendra Modi, are timely but cursory.

Most of this early material reads like a reheated encyclopedia entry. But it does give Manuel an opportunity to set up her major themes. China emerges as a disciplined, industrious but cool and standoffish country; India as a raucous, erratic but warm and welcoming nation. These portraits may or may not be accurate, but they shape Manuel's views of current events.

Part 2 looks at internal issues troubling both countries: inequality, corruption, inadequate care for children and seniors, sexism, pollution, and political unrest. Of course, these are issues that trouble all countries. Hence the urge to compare. Is it better to address these problems in a centralized, focused, top-down way, like China? Or in a decentralized, chaotic, bottom-up way, like India? And when it comes to a subject like sexism, say, how much leverage does a national government actually have?

Finally, in Part 3, Manuel comes to her own specialty, strategic analysis. How are India and China positioning themselves on the world stage? How do they exert power economically? What are their military strengths? Their geographic concerns? How can the U.S. intervene?

Manuel, who once worked for the State Department, is now a partner at a strategic consulting firm. So it's not surprising that this last section is by far the strongest. If Part 1 reads like an excerpt from a history textbook, and Part 2 like a collection of rehashed magazine articles, Part 3 reflects the author's expertise.

It is here that Manuel makes the most of her experience in statecraft as she sorts through a jumble of trade agreements and international banks. And it is here that she makes the best use of her earlier country profiles — when she covers, for instance, the geostrategic concerns that drive even a mighty hegemon like China to exhibit furtive and skittish behavior.

Manuel argues for greater global integration. It's not a bad argument. But who, I wonder, is it for? In its bland tone, its heavy reliance on statistics, its vague but optimistic policy recommendations ("Cooperate, cooperate, cooperate," to quote one example); above all, in its economic Weltanschauung, Manuel's book is a missive from a small and rather strange world: the world of think tanks and technocrats, of consultants and experts.

These are the people often described, with much contempt but little precision, as "neoliberals." If they have an intellectual weakness, it's their addiction to charts and metrics. They want to know what's growing, how fast it's growing, whether it will continue to grow. Their mission is the stewardship of such growth — or, as they call it, "development."

The limits of this perspective become clear when Manuel turns to social issues. Her chapter on the "rampant corruption" in India and China, for instance, frames this chicanery as "a massive tax on their economies" — a hindrance to growth. But corruption is much more than this, and Manuel duly notes how hard it is for official policy to change unofficial norms. The government starts a program, throws money at the problem, yet still nothing improves.

What's to be done? How do you change not only policies, but values? Might education be the answer? Perhaps. But Manuel's book treats education in the same narrow way: as a means of developing job skills and boosting employment rates.

The chapter on gender issues is similarly beholden to economics. It covers infanticide, rape, harassment, domestic abuse, and other horrors, but focuses on the way this violence "retards growth." The chapter on environment and energy pauses to note ways in which religious ideas can contribute to pollution. But it quickly reverts to the usual econo-talk of incentives, targets, and tradeoffs.

This economic emphasis, so typical of much current writing, betrays the book's elite perspective. World leaders obsess over growth because of its political expedience and amenability to measurement. But surely growth isn't an end in itself. What is? What sort of new world are we trying to build?

Manuel's numbers are persuasive. Her chapters twinkle with engaging anecdotes. Her plea for greater integration is compelling and heartfelt. But I wish she had been able to offer something more visionary than a promise of continuing productivity gains — to step outside the realm of think tanks and policy wonks and imagine a world that's truly brave and new.

Nick Wolven is a writer living in New York City.