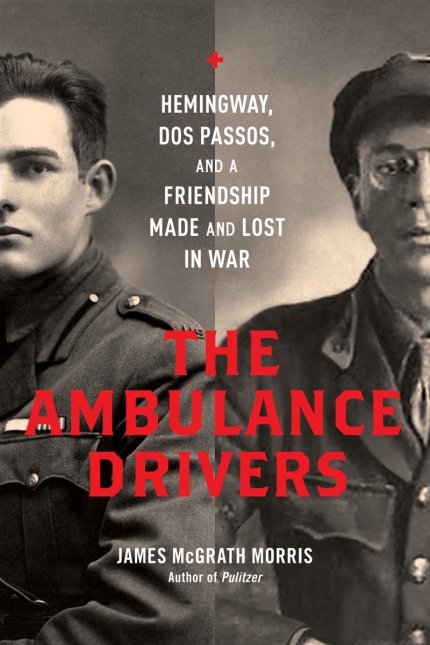 In June of 1918, two volunteer ambulance drivers met in Schio, Italy. John Dos Passos was 22 years old, and Ernest Hemingway was on the verge of turning 19. The two became fast friends as they charted trajectories for their adult lives amid the theater of World War I.

James McGrath Morris’ The Ambulance Drivers is a fascinating read that will satisfy specialized scholars and general audiences alike with its careful research and highly readable narrative. The book offers more than straight biography of two of the 20th century’s most important American authors — it intertwines selections from works they were producing at significant points in their lives. The achievement of this presentation is that it explains not just what they were writing, but moves to contextualize why they were drawn to their chosen subject matter.

The formative experiences of these young men on the battlefront sets in motion the arc of their exceptional lives, a path marked by incredible camaraderie and unbelievable adventure, but concluding, sadly, with mistrust, anger, and ultimately alienation.

While the narrative is a bit slow to start as the early biographies of both authors are outlined, by the middle of the book, the unruly cast of modern characters is fully assembled, and the story hits a perfect stride. Morris is masterful in his weaving of the Hemingway and Dos Passos timelines, with their knitted stories reaching a startling crescendo in the epilogue.

Most appealing are the threads of humor that lighten the experiences of global war. The volume keeps the reader laughing (often out loud) at the authors’ mishaps — from Hemingway accidentally shooting himself in both legs while trying to boat a shark, to Dos Passos’ panicked leap onto the bullring wall after finding himself face to face with a snorting, irritated beast.

The excerpted quotes from Hemingway and Dos Passos’ letters are an absolute riot — with Dos Passos describing himself as “up to his neck in couscous” on a trip to Morocco, and Hemingway appraising Sherwood Anderson’s Dark Laughter as “350 pages of perfect diahorreah…”

Such sharp-witted passages leave the reader wishing these two writers had been so free with humor in their published works. The book’s successful focus on the Hemingway/Dos Passos banter documents an often overlooked and definitely underappreciated biographical element in the scholarship.

Morris is adept at making the historical record lifelike, giving a palpable sense of the climate in which these modern writers were forged. Nuanced details — like the image in Chapter 13 of Dos Passos returning to the United States from Europe in 1924 with a copy of James Joyce’s Ulysses stowed away in his luggage as contraband — support the larger point about these artists: They lived, composed, and managed to thrive in an incredibly difficult world of censorship and editorial challenge.

Even the reader interested only in Hemingway or Dos Passos will close this volume with an education in the modernist movement. It is vital for writers like F. Scott Fitzgerald, Ezra Pound, T.S. Eliot, Archibald MacLeish, Gertrude Stein, Anderson, Dos Passos, and Hemingway to be examined in relationship with each other instead of in isolation as so often happens in anthologies for university survey courses.

Morris effectively illustrates that literary modernism did not happen solely at the writing desk: It drew its breath from the personal interactions of writers, editors, critics, publishers, and tastemakers in offices, salons, cafés, and bars all over the world. Morris’ particular gift in painting this double portrait is that he captures the swirl of modern existence that made the background of these scenes so noteworthy.

On the whole, this volume is thoughtful and engaging, and it will likely become an important part of the critical conversation about these two magnificent writers. The Ambulance Drivers will do for Hemingway criticism what Scott Donaldson’s vigorous Hemingway and Fitzgerald: The Rise and Fall of a Literary Friendship did in 1999: offer a complete post-mortem analysis of a critically important friendship that had a part in shaping a literary movement.

Ashley Oliphant, Ph.D., is an associate professor of English at Pfeiffer University in North Carolina. She is the author of Hemingway and Bimini: The Birth of Sport Fishing at “The End of the World” and Shark Tooth Hunting on the Carolina Coast.