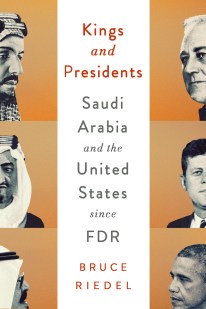 Bruce Riedel is one of Washington’s most distinguished mandarins on the Middle East. His career as a CIA analyst on the region led him to two stints on the National Security Council and one as a deputy assistant secretary of defense.

He was in the White House during the Gulf War of 1990-91 and the 9/11 attacks and in the Pentagon during the Khobar Tower bombing in Saudi Arabia in 1996. He is supremely qualified to assess the state of Saudi-American relations as he does in Kings and Presidents.

The highlights of the book are his accounts of those events that he witnessed firsthand. (Readers would have benefitted from more such insider insights.) This privileged insider status, however, also has its limitations. Riedel’s account of the history of the U.S.-Saudi relationship adheres to conventional wisdom.

The outlines of his story are not wrong. But he doesn’t engage with the more critical scholarship that diplomatic historians and political scientists are now producing based on the American diplomatic archives and the archives and papers of those working for ARAMCO, the consortium of American oil companies that developed the Saudi oil industry.

Authors such as Robert Vitalis, Nathan Citino, and Toby Craig Jones have broadened our understanding of the Saudi-American relationship and called into question some of the assumptions that form the core of Riedel’s story.

As the book’s title implies, the author’s account is focused on the leadership of each country. That is an essential part of the story, because the relationship has for decades been very much managed at the elite level.

Riedel points out that there is little public support on either side for the relationship, emphasizing how different the two societies are. This common insight could have been developed into a more detailed discussion of just why Saudi Arabia is so unpopular in other quarters of the American political elite.

Congress has certainly not been friendly toward Saudi Arabia. The overwhelming votes to override President Obama’s veto of JASTA, the Justice Against Sponsors of Terrorism Act, in 2016, is just the most recent example of bipartisan hostility toward the kingdom.

(JASTA permits citizens to bring suits in American courts against Saudi Arabia and its officials for alleged involvement in the 9/11 attacks, despite the fact that every official American inquiry into those events has found no evidence of Saudi government support or involvement.)

The editorial pages of the elite American press, particularly the New York Times and the Washington Post, rarely find anything good to say about the kingdom. The executive branch is usually the sole defender of the relationship.

Riedel does a good job of explaining why both Republican and Democratic presidents since FDR have taken that position, but he could have used his deep knowledge of Washington to tell us more about why everybody else is not so keen on the Saudis.

While Riedel is correct about the profound differences between the two political systems and societies, there always have been some important interests in the United States lobbying for a strong Saudi-American relationship.

But those interests have changed over time. Since the discovery of oil in the country in the 1930s, the American oil companies making up ARAMCO provided very strong support for the political ties. But when Saudi Arabia took control of ARAMCO (now Saudi ARAMCO) during the oil revolution of the 1970s, the incentives for Big Oil in the U.S. to spend its political capital in support of Saudi Arabia declined. That role was taken up by the American defense industry, which found in the newly rich kingdom a voracious consumer of American-made weapons.

While Congress remains generally hostile toward Saudi Arabia, there always seem to be enough votes to get arms deals approved. It would be interesting to explore how, if at all, the management of Saudi-American ties in Washington changed with that shift in the economic basis of the relationship.

Riedel’s concluding reflections include some important insights about the current debate in Washington surrounding that relationship. For instance, he is refreshingly direct in his debunking of the prospects of an open Saudi-Israeli alliance against Iran, brokered by the U.S.

This is the “flavor of the month” in some Washington circles, whose understanding of the Middle East seems limited to recent press clippings. Riedel emphasizes that, while Saudi Arabia is more than happy to cooperate quietly with Israel when their interests coincide, the strong support at both the elite and public levels for the Palestinian cause in the kingdom makes this idea a non-starter.

Like many in Washington, Riedel thinks that Saudi Arabia has to make significant changes in its domestic political and economic systems if it is to survive. The fear of Saudi instability has been a constant in American decision-making circles since the beginning, despite the fact that the Al Saud have sustained themselves through decades of crises.

With the ascent of Crown Prince Mohammad bin Salman, who seems intent on shaking up Saudi Arabia on many levels (though hardly in a democratic direction), we may get a real-world test of Riedel’s hopes. As we have seen in the Arab Spring, what begins as positive change might not end up that way. Be careful what you wish for.

F. Gregory Gause III is a professor and John H. Lindsey ’44 Chair at the Bush School of Government and Public Service at Texas A&M University.