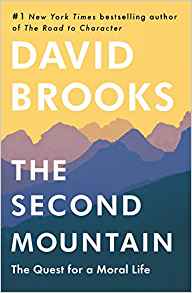 We live in a world with too much information and too little synthesizing of it. In this chaotic state of affairs, a desperate voice cries out from the mountaintop, “Would some smart person please sift through this vast crop of data, separate the cream, and then blend it together in a way that enhances our understanding of the human condition?”

David Brooks now answers that call with The Second Mountain: The Quest for a Moral Life. The esteemed author’s day job for the last 16 years has been writing 800-word columns twice a week for the New York Times on subjects ranging from politics to sociology to faith. He’s previously described his process for creating each op-ed as follows: Collect roughly 200 pages of potentially useful research, lay it all out on his floor, organize it into piles, turn his imagination loose, and meld the best parts into a tight essay.

In his new book, Brooks elevates this assemblage/distillation process to new heights as he gleans the most important thoughts from some of history’s leading philosophers and theologians, and combines them with lessons learned from his own life, resulting in 300+ pages that will likely cause legions of readers to reassess how they want to spend the rest of their days.

No major league thinker takes on the herculean task of addressing “the quest for a moral life” without being triggered by a major stimulus. In Brooks’ case, after his bestselling book The Road to Character came out in 2013, he was traumatized first by his divorce (after a 28-year marriage) and then by seeing his moderate conservative editorial slant get skewered by the Tea Party and the Trump revolution.

As is often the case when a person’s life jumps the tracks, Brooks’ nosedive into the depths of his emotional valley produced a life-changing epiphany. Whereas The Road to Character was paved by the premise that a person could morally elevate himself into exhibiting “eulogy virtues” (as opposed to “résumé virtues”) by steeling himself to live every day in a mode of high integrity, sometime after 2013, the downcast walking-in-the-wilderness author determined that a person’s ultimate life goal should not be merely to engage in consistent altruistic behavior. Rather, it should be to look outside himself and commit to the ongoing responsibility of elevating the station of others. Making such a selfless community-enhancing decision, Brooks concludes, is the only means of creating a life spent in a stream of joy.

With this theme, Brooks could well have titled his new book The Road to Joy, though that would lack the mysterious imagery of the chosen title. What’s the Second Mountain? That begins with knowing what the First Mountain is. Daily living on life’s First Mountain entails always keeping score (i.e., making comparisons to others) in the never-ending pursuit of money, power, success, and Instagram happiness.

Such secular aspirations are, of course, fueled by the selfish ego. And even when a person thinks he’s achieved his goals, he can look in the mirror, see himself transform into bleached-blonde, smoky-voiced Peggy Lee, and start singing her classic song, “Is That All There Is?”

Pursuing Plan A on the First Mountain leaves two sets of victims: the “unsuccessful” inhabitants depressed over their inability to obtain mass quantities of money, power, success, etc., and the “successful” ones, who ultimately find themselves in sync with Ecclesiastes: “Vanity of vanities. All is vanity…There is nothing new under the sun.”

An enlightened few among those living Plan A on the First Mountain at some point smell the coffee and move to Plan B on the Second Mountain, where long-term, authentic joy can actually be found. How? By making and keeping what Brooks calls “the Four Commitments” — to a spouse/family; to a faith/philosophy; to a true calling/cause as the primary outlet for expending one’s heart, mind, and soul horsepower; and to a community.

Fulfilling each commitment requires someone to rotate 180 degrees from the mirror and concentrate all his energy on serving others. That mode of living becomes sustainable over the long haul only when the person transcends his self (typically consumed in “hyper-individualism”), becomes proactively and unselfishly relational with others, and is inspired by a steady outpouring of love to improve others’ lots.

No mortal has the wherewithal to start life on the Second Mountain. The desired destination can be reached only after a person spends substantial time on the First Mountain, where he will stay until somehow, some way, an inner light shines into his consciousness, which empowers him to find (or be found by) his true passion, producing what Brooks calls an “Annunciation Moment.” From that point on, he actively pursues fulfilling his outward-focused purpose.

To succeed fully on the Second Mountain, the life traveler must not only identify and devote himself to his calling (to which Brooks devotes five chapters), but also maximize his marriage (five chapters); deepen his faith/philosophy (four chapters); and assume responsibility for building up his community by developing many thick relationships (three chapters).

The most electrifying part of The Second Mountain comes in Chapter 21, the book’s longest, aptly titled, “A Most Unexpected Turn of Events.” In those 40 pages, Brooks gives the specifics of his personal faith journey: being born and reared a Jew (though attending private Episcopal schools and summer camps during his formative years); catching fire intellectually in college at the Jewish-dominated University of Chicago; marrying his first wife and raising his children in the Jewish tradition; and, ultimately, becoming a “wandering Jew and a confused Christian,” a “border stalker,” and an “amphibian,” planting his feet with ever-increasing firmness into both “moral ecologies,” aided by his Wheaton College-educated second wife, Anne Snyder, to whom he dedicates the book because of her having brought him “boundless joy.”

By weaving together dozens of pearls from this spectrum of world-class thinkers and unifying their thoughts into an account of his faith pilgrimage, Brooks demonstrates powers of synthesis that surely rise to the level of genius.

For those who have now finished this review of The Second Mountain and decide to forego Brooks’ new book, here’s hoping that the rest of your life on the First Mountain provides some measure of Instagram happiness, and that you never tire of singing Peggy Lee’s most melancholy song.

An engaging but disjointed exploration of the meaning and costs of liberty.